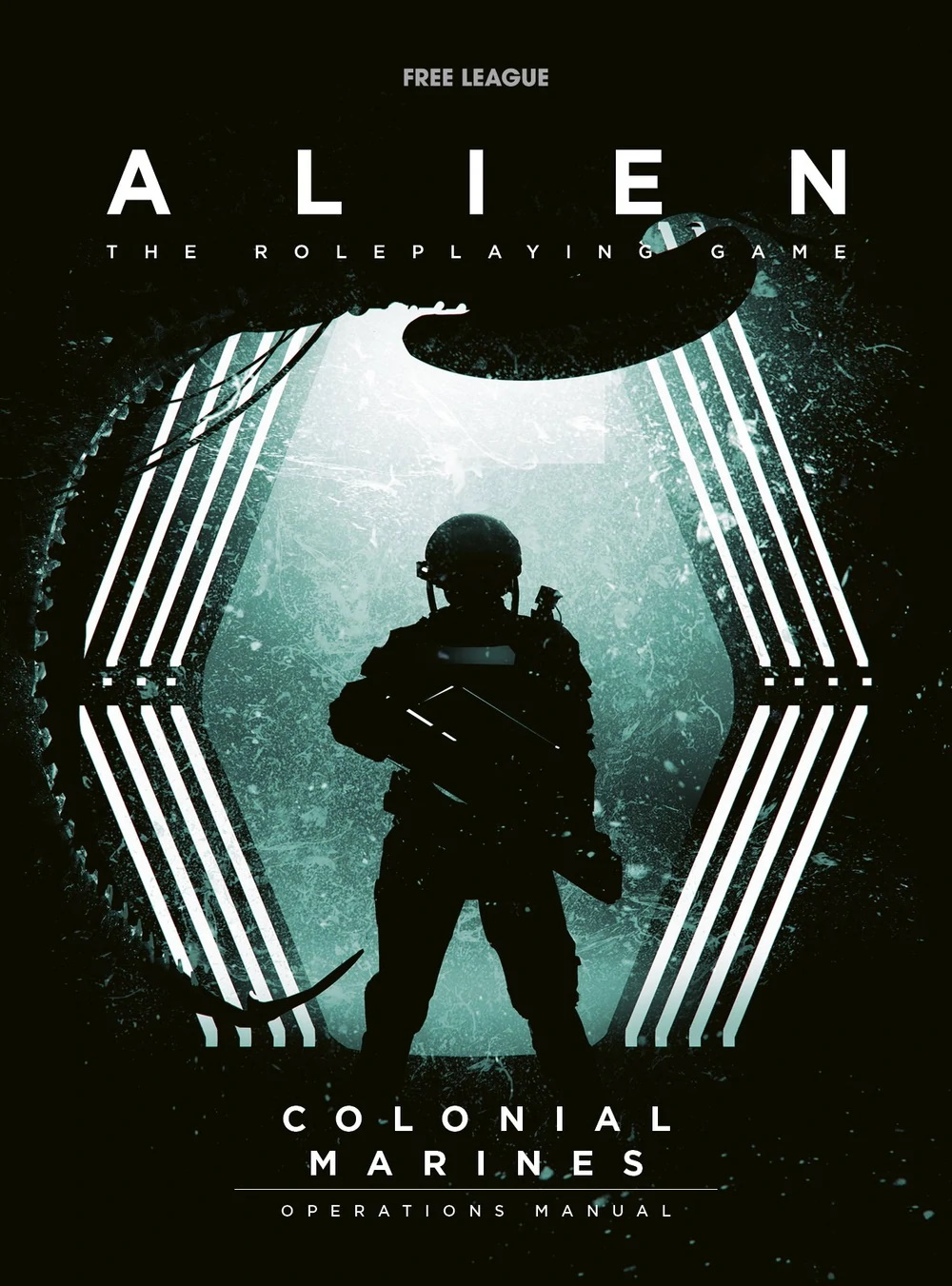 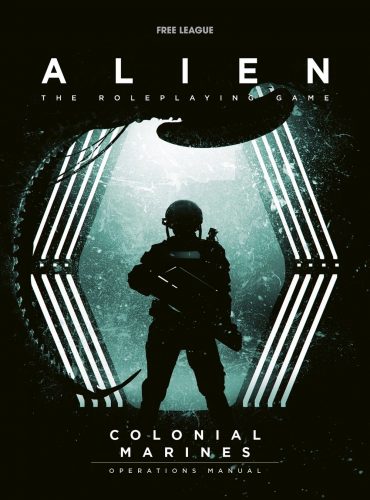 Alien: The Roleplaying Game (reviewed here) was the game that many of us had been waiting (decades) for; a roleplaying game that recreated the experience and world of Alien.  For some, however, their favourite was the sequel Aliens, central to which was the iconic military force of the colonial marines corp.  There had been previous, less than successful, attempts to create an RPG based around the colonial marines.  That is, until now.

The Colonial Marines Operations Manual for Alien: The Roleplaying Game includes everything players and games masters, or ‘games mother’ as they are called in this game, will need for a colonial marines’ campaign.

This is a colossal tome, coming in at over 350 pages but looks amazing.  The artwork on the front cover encapsulates the mood and themes of the setting and the stories that can be told.  Inside there is some gorgeous artwork that complements the individual chapters.  More than just making the book look pretty, the interior artwork evokes the epic mood and feel of what players can expect when playing colonial marines

The book is split into two sections.  The first half incorporates new material for players and the second contains material for people running the game.  It is ordered in a logical manner, with warnings for players ahead of the GM section.  As an inherent aspect of Alien: The Roleplaying Game is the sense of mystery, thus ensuring players avoid spoilers is key.

The book opens with background on the history, organisation and structure of the colonial marine.  Not only does this offer insight into where the players will fit into the overall structure of the United States Colonial Marine (USCM) corps, it also demonstrates the size and scale of this force, as well as the massive area of operations.  The opening segment also explained how corporations are able to influence military operations.

This section includes more skills and background material for creating a variety of colonial marine characters.  Previously in Alien: The Roleplaying Game, the colonial marine career was the ‘grunt with the gun’.  Here, the background is fleshed out with a variety of specialism on offer.  These specialisms take the form of ‘Military Occupational Speciality, which can vary from Assault and ComTech to Medic and Rifleman.

There is also a ton of new hardware, from guns to attack cruisers, all of which is essential material for a military-SF campaign.  Each item is accompanied with the necessary statistics, as well as background on each item and a drawing.  The latter is especially useful for vehicles, as rather than telling players what they see, the GM can show a picture.  Characters will not always instantly recognise a particular vehicle or ship, so having an image can be incredibly useful

The second section is for only GMs eyes only, as it offers further background information on the setting and the various armed services within the Aliens universe.  There are also details on the different types of missions that colonial marine squads can be assigned.  These vary from rescue missions to ‘bug hunts’.

Although this book is focused on the USCM, there is sufficient information about the armed force in the Three Worlds Empire and the Union of Progressive Peoples.  With some planning, it could be quite easy to play marines within these other factions.

The background information in this section includes the various black projects undertaken by both the USMC and the other factions in the setting.  These are not just the expected bioweapon projects involving xenomorphs, but the more ‘conventional’ secret military projects.  Some players may have heard already about, such as through reading the Aliens comics, but others will come as a complete surprise.

The GM section also includes the epic seven-mission campaign The Frontier War, which acts as a sequel to the cinematic scenario Destroyer of Worlds (reviewed here).  Whilst having played Destroyer of Worlds is not essential, it does provide greater context for events leading up to the campaign.  The ongoing story also continues to expand the world of Alien.

This campaign could be played as a seven-part campaign, or form part of a much larger ongoing campaign.  Its structure is deliberately freeform, as the six missions can be played in any order.  Each mission establishes the scenario’s parameters, by explaining the player characters’ orders and describing the location.  It is then up to the player characters to decide how they resolve the situation.  There are some suggested approaches for each mission, through the onboard AI, but it is ultimately player-led.

Given the structure of the colonial marine corps and the ‘buddy system’ it uses, this campaign would be ideal for four or five players.  This would allow two two-men teams, and a sergeant if need be.  Running the campaign for two to three players is possible, as a single two-men team (and a sergeant), but it would lack the necessary squad mentality that a campaign focused on colonial marines would need.

The role of sergeants are handled well, as the book makes a point of stating that they are not the leaders of the squad.  Instead, it reinforces the need for the player characters to collaborate and work together to defeat their opponents.  The sergeant acts as a liaison between the commanding officer and the squad.

It was great to see the necessary maps and schematics for every mission, which incorporated a wide variety of goals and environment for the players to explore.  The maps continue the retro-futuristic style of the Alien: The Roleplaying Game books and echo visuals seen in the films.  The only downside is that they are not provided as a separate map pack for handing out to the players, such as those in the cinematic scenarios.

I especially liked all the references to the expanded universe of the Aliens comics.  Characters, like Billie and Wilks from the revised editions of the first Alien comics, as well as elements from the expanded Aliens universe are mentioned.  These neat little references make this book a joy to read for fans of the series. 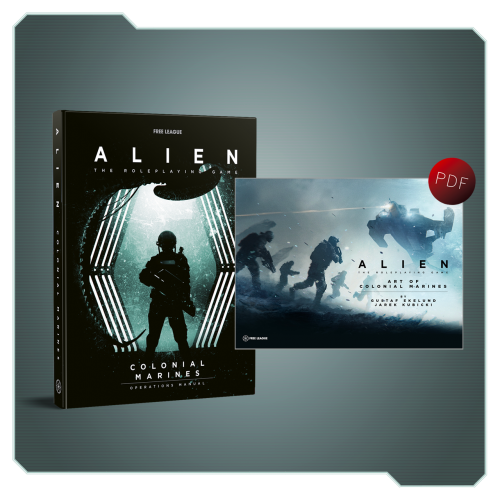 Load more
Alien: Colonial Marines Operations ManualAlien: The Roleplaying Game (reviewed here) was the game that many of us had been waiting (decades) for; a roleplaying game that recreated the experience and world of Alien.  For some, however, their favourite was the sequel Aliens, central to which was the iconic...