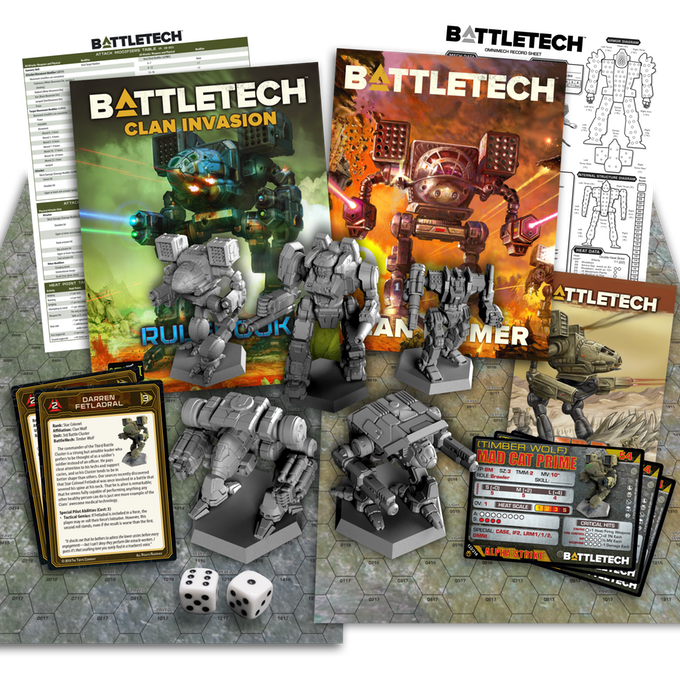 Following the successful launch of two new box sets for Classic BattleTech (an interview with Jordan Weisman, the creator of Classic Battletech, can be found here), “the tabletop game of armoured combat” comes to Kickstarter for the first time.  The Clan Invasion box set will unleash new versions of Clan and Inner Sphere mechs, expanding the tactical options available to players.

The Clan Invasion of 3050 witnessed the true heirs of the lost Star League charge deep into the quarrelling Successor States. As the Clan in rolled across the Inner Sphere, the five great houses unified to devise some way to halt the invaders.

Utilising the same techniques that modernised the original BattleMechs found in the core sets, each of the new mechs have been re-imagined; holding to the spirit of their original design while embracing a modern aesthetic.

The Clan Invasion box set will also add five OmniMechs (highly configurable mechs), including the seminal Timber Wolf. It will also include a bevy of support materials, such as the rules needed to incorporate Clan technology in your games plus brand new maps.

The kickstarter’s stretch goals will expand the ranks with more mechs, boasting equally re-imagined aesthetics, available to be unlocked. The Clan Command Star expansion will include the devastating Dire Wolf and Shadow Cat, whilst the Clan Attack Star pack will contain the Warhawk and Nova Cat. Meanwhile, the Inner Sphere will attempt to stop the invasion, with the Inner Sphere Command Lance pack, incorporating the Marauder and Archer, whilst the Warhammer and Phoenix Hawk will drop from the Inner Sphere Battle Lance pack.

Other add-ons include a plethora of BattleTech merchandise, the latest rulebooks, sourcebooks, boxed sets, and more.

Alongside the Clan Invasion Kickstarter, the brand-new Chaos Campaign: Succession Wars has been released for free.  This PDF provides rules for selecting a force and embarking on mini-campaigns, as well as tools for creating campaigns of your own.

The scenarios included with the original boxed sets are intended as one-off battles. Chaos Campaign introduces campaign play, which offers consequences between individual missions, a reason to chase down specific objectives while preserving your troops, and ways to improve your force as you progress.