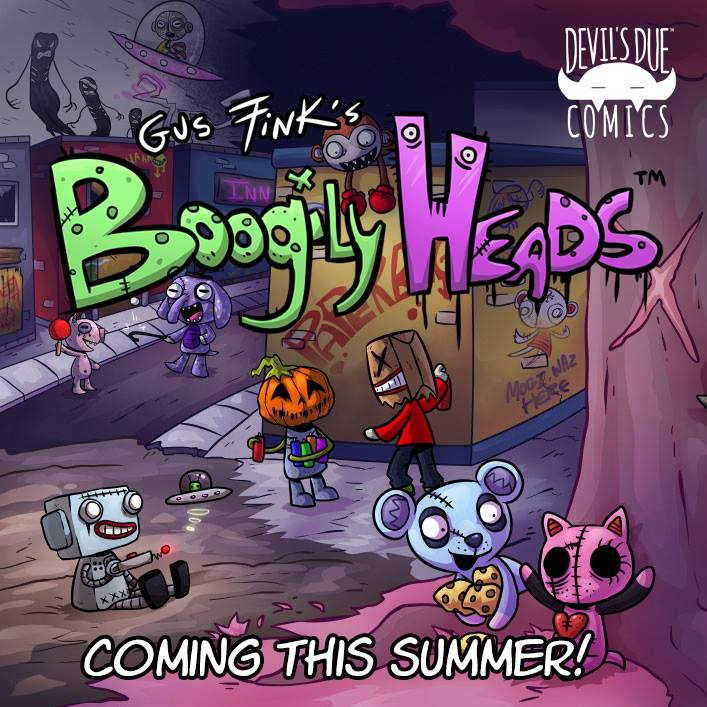 This Summer, comic publisher Devil’s Due will release the first of several comic books by talented creator, Gus Fink. Featuring his collectible ‘Boogily Heads’ line of toys, the original comic book story will centre around a boy who is teleported by a magical portal into the land of Boogilyville, and encounters many creepy creatures who accompany him on his quest to return home.

“Boogily Heads is a perfect fit for the Devil’s Due line because not only is it a great comic with a ‘Burtonesque” style that people will love,” said the publisher’s commander-in-chief Josh Blaylock, “But it also fills a void we have for comics that appeal to the growing all-ages comics audience, while still fitting our vibe.”

Working alongside artist Laura Pendl, Fink expressed a great deal of enthusiasm for the project and his return to comics.

“I’m very happy to be working in comics again. I haven’t been in the game since working with Slave Labor Graphics in the mid 2000s on The Trouble with Igor, and It’s great to return to my first true love in art,” says Fink.

Devil’s Due and Fink also plan to release a range of merchandise alongside the books, with retailers Hot Topic and Spencers getting in on the action. Avid fans will have a few months to wait until it hits the shelves, but in the meantime you can track the project’s updates via instagram!