Everything you could want from a Hellblazer story.
Great characterisation with some genuinely raw emotional pay off .
Excellent art.
Ambiguous ending will intrigue and annoy in equal measure.

It's the end of Hellblazer.
Ambiguous ending will intrigue and annoy in equal measure.
No afterword.

In this final Hellblazer book, John Constantine -a man who has walked into Hell and back more than once- finds himself somewhat troubled by a vision of his own death. Before trying to make sense of his apparently imminent demise though, Constantine must deal with werewolves and visit Ireland to track down his estranged nephew: an alleged serial killer obsessed with the occult, driven mad by the cursed Constantine blood line.

Also featured here is Hellblazer Annual: Suicide Bridge, which has Constantine returning to Liverpool where a visit to an old acquaintance, now at death’s door, motivates Constantine to track down a childhood friend who ran away from home and vanished years ago. 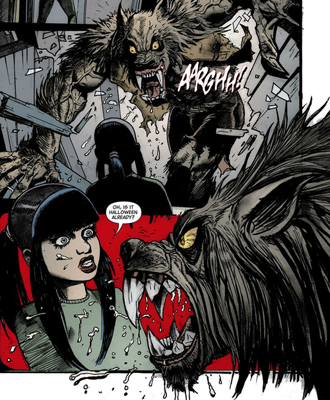 Epiphany gets an unexpected guest.

The House of Wolves has Constantine and his punky young alchemist wife Epiphany both thinking back to an earlier time in their lives after seeing a horror film. For Epiphany a job for her father, who at the time was trying to work his way into the favour of the political elite in his own typical way, goes distinctly awry.

This is a great example of how a self-contained single issue story can work and work well. There’s a prevailing idea that the ‘in-between’ issues of a long running title are just disposable filler before the next bigger story starts, which is of course wrong. Artist Simon Bisley and writer Peter Milligan’s take on a younger Terry Greaves and John Constantine, their tenuous relationship and Constantine’s awareness that Epiphany wasn’t just any teenage girl, adds a further dimension to the couple’s relationship in the present.

The Curse of the Constantines is a story of several parts, Miligan re-inforcing Hellblazer’s very much real-world setting by having an anti-capitalist protest feature as the backdrop for the initial part of the story. In one memorable scene, a somewhat distracted Constantine doesn’t take kindly to someone hitting on Epiphany in the pub, and in a twisted display demonstrates how easily he can really screw with somebody’s head when he feels inclined to.

This is a long and rambling story which takes Constantine from his London stomping ground to Ireland, via Liverpool by way of angry faeries and disturbing visions. This story also introduces Finnbar Brady, Constantine’s oblivious nephew, a family man with three children who has his own problems going on. It also features numerous other elements, a bizarre cult, a ghost, mythological beings, dark magicks and more besides which anywhere else might seem cliched but Milligan puts his own spin on them and roots them in this world.

Death and Cigarettes, the final Hellblazer story, has Miligan having to deal with the problem of how to bring a long-running, much-loved and essentially open-ended title (Hellblazer, unlike the vast majority of Vertigo-associated titles, was never intended to be a finite story) to a close, and to his credit Milligan has done a pretty good job of what is undoutedly one of the most difficult tasks a writer can face in comics.

The Fates, a trio invisible to mortals (looking the antithesis of what you would expect from their name, with one wearing a T-shirt with YOU’RE NEXT on it) have decided that it is time for John Constantine to die. The only problem is Constantine is ‘no ordinary mortal’ as one of them puts it, and has been plagued by the idea of his own imminent demise. 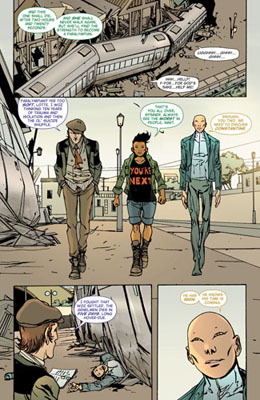 The Fates conspire against Constantine.

This story is packed with the essence of what makes a Hellblazer story. All the classic hallmarks are there: Constantine sat in a pub, plenty of sex, a wryly cynical inner monologue, plenty of profanity, demons and occult symbolism. What becomes immediately clear, however, is despite being a relatively new character in Constantine’s world Epiphany really is one of the best- she has never been helpless or a damsel in distress. For all the otherworldly elements in this story, at its heart it’s a gut-wrenchingly brutal human drama with an emotional core.

This story not only features a stunningly effective cliffhanger ending at the close of its first part, it also has Epiphany acting in a way completely unseen previously as a result; behaving more like her crime lord father than ever before. There are numerous examples of the art team really hitting home, including a full page devoted to a emotionally distraught and desperate Epiphany, and another featuring several panels of Constantine’s face as he lays besides his wife and it suddenly dawns on him the ways things are headed. The bitter irony being that for all his many and varied dalliances with dark powers, demons, black magic and more, it’s something altogether more real that seals John’s fate, and it’s his wife’s reaction to this that really fuels this story.

Miligan has several characters from Constantine’s past making appearances here. Refreshingly, these aren’t awkwardly shoehorned in for the sake of it; despite the number of Constantine’s acquaintances and friends that are still among the living being rather low, there are some that don’t feature. As much as it would’ve been good to see these characters (Map being one example) there’s nothing worse than characters being clunked into a story where they don’t really fit. In the case of Map, it’s undeniable that the omniscient protector of London will be very much aware of what’s happening, however given how their last encounter ended way back in issue 238 his absence is understandable. 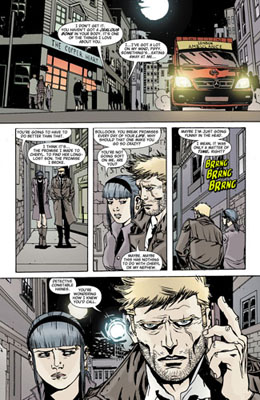 worthy subject of analysis on their own regardless of the preceding story. The final image is impressively detailed with a great nod to longtime fans of the title.

Whilst everyone has their favourite Hellblazer writer- and many will have a ‘Hellblazer went downhill ever since *insert name here* start writing it’ line- the title’s impact on comics and more can’t be denied, from its early political bite and disturbing imagery in the Jamie Delano days, to inspiring the look of Castiel on CW’s Supernatural more recently.

Which is why it is a little disappointing there’s no sort of afterword referring to the title and the character’s importance and influence in the world of comics and beyond- after all this final volume is number 35 (not including several other self-contained Hellblazer books, a number which would be higher still if Paul Jenkins’ 39-issue run on the title had been collected)- an omission that is being corrected as DC reissues the whole of Hellblazer in numbered chronological order. That’s a pretty impressive achievement for any title never mind one that was so distinctly unique and aimed squarely at adult readers.

Death and Cigarettes is a fitting testament to one of the most enduring characters in modern comics, and while John Constantine may be around in DC’s New 52 universe both in Justice League Dark and his new title, Constantine (the so called ‘replacement’ for Hellblazer) the latter has been savaged by numerous critics (here’s my review of issue 1) and according to various sources if anything it’s got worse rather than better.

Andy Haigh started writing to counteract the brain atrophying effects of Retail Hell, now it's an addiction. Andy is an unrepentant sequential art absorbist and comics are one of his passions. Other interests include Film, Music, Science Fiction and Horror novels and quality TV like Game of Thrones. He can talk about these at great length if only someone would listen. He lives a somewhat hermit like life in The Shire, spends too much time on social media and is still waiting to go on an adventure.
More Goodness
breakingcomicsEpiphany Greaves