Hope has returned after being cast out of the Under Realm, having regained some of her memories if not her powers.

To her horror she realises that her greatest wish -that her mother be released from her relentless torture in the Under Realm- has come true as it is revealed that Death Queen, despotic would-be ruler of the whole Under Realm, is Hope’s mother Marion; driven insane from years of torture and now mistress of the malign forces that once kept her prisoner.

Defeated, Hope, Wargoth, Azlando, Balthazar and Salacia flee to New Aberffraw with the help of General Belial to seek refuge from an old friend. Death Queen is quick to pursue her daughter though desperate to extinguish her life once and for all and conquer the Under Realm.

Lady Death is an undisputed icon of bad girl comics and after a rather convoluted publishing history with several different companies publishing the title, Avatar (the indie publisher known for its numerous no-holds-barred adult oriented titles) created the Boundless imprint for the relaunch of an all-new Lady Death, written by co-creator Brian Pulido and Mike Wolfer.

Lady Death has a bit of an uphill struggle on its hands, being a long-time cult title from the 90s explosion of comics- an era which has a reputation for producing some of the most shallow and crass titles in recent comics history- and Lady Death, to some, was one of the worst offenders.

So how does the new Lady Death fare? 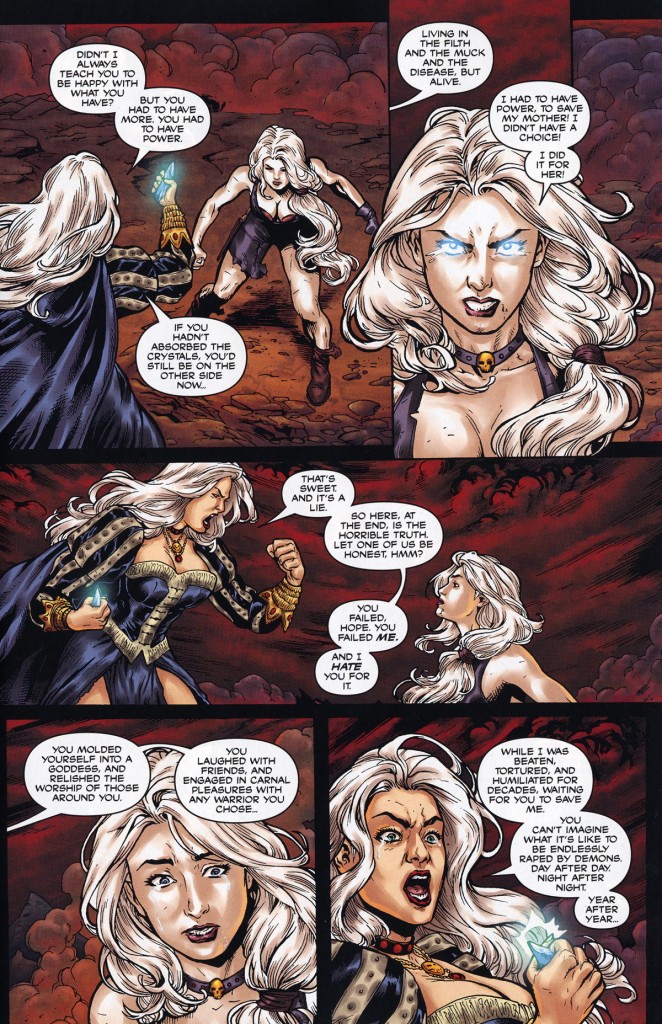 Mike Wolfer and Brian Pulido have actually created a pretty impressive narrative full of interesting characters whose allegiances are never totally clear. Subverting normal tropes by having demons like Azlando and Salacia fighting against Death Queen’s forces make for an interesting and unpredictable story.

It’s the relationships between these characters which are key, though; when Hope and her friends arrive at New Aberffraw ,Satasha, the queen, has to decide whether to offer sanctuary to her friend Hope despite Wargoth the necromancer being in her party- one of the driving forces behind the rebellion against Death Queen whilst Hope was in exile on the mortal plane.

There’s plenty of scheming going on amongst Death Queen’s forces too, with demonic powerhouse Behemoth being manipulated by Death Queen and Tormina (Death Queen’s daughter and Hope’s half-sister) a necromancer who clearly has her own agenda, saving Behemoth from Death Queen’s magic after Hope escapes, and observing developments on both sides of the war. There’s plenty of potential for a long play in this character and it’ll be interesting to see where that goes.

It’s not all scheming though, there’s plenty of action to be had too with numerous battles both big -the siege of New Aberffraw- and small -a brutal fight between Wargoth and Behemoth- amongst others.

Hope is reunited with Valora the fallen angel.

The character designs are impressive throughout: Tormina clearly influenced by fetishistic goth fashion, Valora the fallen angel and Stigmata, Wargoth’s ex-wife, whose body is made of sentient blood which can form at will and leads to one of the better fight scenes towards the end of this volume, being the highlights.

There are numerous occasions when it wallows in its T&A stylisms a little too much- almost every character is in a perpetual state of half-nakedness, and Hope’s regular clothes from her time on Earth are quickly burned off by her mother on her return. Most fight scenes seem to come with a requisite number of gratuitous thong-clad arse shots, which really remind you of how inherently ridiculous Hope’s outfit is.

It’s a tricky balance to pull off; Lady Death’s appeal, for better or worse, is its cliched heavy metal fantasy art design, and altering this too much would alienate its fan base… but at the same time it seems anachronistic, and plays against the character work that is being set up.

Gabriel Andrade‘s art for the most part seems to fare better in the quieter scenes rather than the action: a scene of Hope’s party sat around a table at an inn is one of the best images in the book, whereas the busy scenes of the siege get a little confusing, although other fight scenes -like the bone crunching fight between Behemoth and Wargoth and Hope’s encounter with Stigmata- are well-handled.

It’s definitely an aquired taste, and no doubt there are many that see it as a worthy target for diatribes about pandering to the hormonal male market, but once you get past the thongs and the flesh there’s a pretty good fantasy story and some interesting characters.

Andy Haigh started writing to counteract the brain atrophying effects of Retail Hell, now it's an addiction. Andy is an unrepentant sequential art absorbist and comics are one of his passions. Other interests include Film, Music, Science Fiction and Horror novels and quality TV like Game of Thrones. He can talk about these at great length if only someone would listen. He lives a somewhat hermit like life in The Shire, spends too much time on social media and is still waiting to go on an adventure.
More Goodness
breakingBrian Pulidocomic books