Marvel’s A-Force a New Take on The Avengers 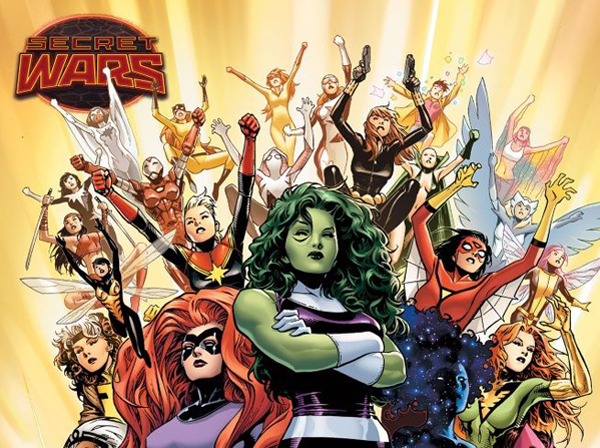 Unless you’ve been living in a cave without wi-fi for the last week you probably already know about Marvel’s A-Force. For those just emerging from their caves A-Force is set to be a new title from Marvel from G. Willow Wilson and Marguerite K. Bennett with artwork by Jorge Molina.

The new title will be part of the upcoming Secret Wars which will find the Avengers MIA leading some of Marvel’s female characters including She-Hulk, Medusa, Dazzler and plenty more to form their own team – A Force.

Whilst this has been met with some predictably snarky comments on the interwebs like “A-Force saving the world 3 weeks a month” or “A-Force? More like T ‘n’ A-Force” it does raise some questions, is this the latest manifestation of Marvel’s commitment to “gender diversity” or is it more like clumsy pandering? Worse still is this just a crass exercise is femsploitation? Having writer G. Willow Wilson, the writer of the smash hit Ms Marvel featuring Kamala Khan, on board indicates that this shouldn’t be “T “n” A Force” but it still remains to be seen exactly how long A – Force will be around, is it just a token gesture for Secret Wars or will it actually have some sort of impact?

Andy Haigh started writing to counteract the brain atrophying effects of Retail Hell, now it's an addiction. Andy is an unrepentant sequential art absorbist and comics are one of his passions. Other interests include Film, Music, Science Fiction and Horror novels and quality TV like Game of Thrones. He can talk about these at great length if only someone would listen. He lives a somewhat hermit like life in The Shire, spends too much time on social media and is still waiting to go on an adventure.
More Goodness
AvengerscomicDazzler