It's a compelling tale that will keep you guessing, offering unexpected twists and turns at every corner. It's beautifully designed and you can see

It ended. That's all I can say against it, it has an end and I wanted more, both of the characters and the story.

I’ve recently gotten my grubby hands on a copy of Porcelain: A Gothic Fairytale by Benjamin Read and Chris Wildgoose and I thought I’d share my finds with you, but in case you’re one of those that don’t like to read long winded reviews, here’s the short version of it: It rocked!

Published by Improper Books, with a release date set for July of this year, the comic has been touring the internet for a while, glimpses being offered to curious readers for a few months now. I admit I was one of those curious readers ever since I read the few pages the publishers have posted online, the start of the tale leaving me wanting more.

Now, for those of you that do enjoy long-winded reviews peppered with pearls of wisdom by yours truly, here’s the extended version of It rocked!

**ATTENTION: HERE BE (SOME) SPOILERS** 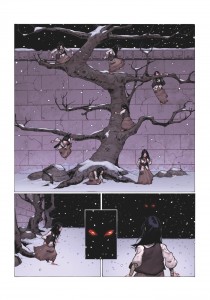 The heroine of our story is Child, a young girl that ends up crossing paths with a man fabled to be a wizard, his wealth and penchant for secrecy making him the target of rumours and gossip all over town. A virtual hermit, the Porcelain Maker, as he’s known through the story, or Uncle, crosses paths with Child as she breaks into his house at the behest of Belle, a less than pleasant character who unintentionally helps Child change her life for the best. Or does she? I suppose you’ll all find out in July.

One of my favourite things about the story was the fact that it wasn’t predictable. Without giving too much away, I’ll say that just like Child I had certain expectations of how things would turn out. She voiced my own thoughts in the book’s pages and I was actually impressed with how well the details were thought out to avoid the clichés of the past and to mislead the reader into thinking they’ve got things figured out. As I was reading the first few pages of it I actually thought I knew what was going to happen, particularly since it includes recognizable elements of horror and Gothic novels we’ve all encountered before at least once, whether around a camp fire, while reading a book or watching a movie. The novelty of this story stems specifically from the fact that it avoids following in the footsteps of its predecessors.

Since this is a comic book, a good story wouldn’t have been enough. I know, it sounds shallow, but let’s face it, if you buy a graphic novel you expect some fine art to keep you entertained, not just a good tale (Even though in my opinion that’s equally, if not more so important. Sue me, I’m weird.). Speaking of the art, then, it was beautiful. The same amount of detail that went into making the story compelling was put into creating characters that wouldn’t blend in with so many other comic book characters. Each is recognizable, unique and, unlike certain type of superheroes, each possesses more than one outfit. The passage of time is actually noticeable by the way the character’s clothing style changes, as well as their general looks. It’s most noticeable with Child, since she’s the central character, at least for me, and also because she’s the one that changes the most since she took her first steps into Uncle’s manor, evolving from being nothing more than a skinny, foul-mouthed runt into a lady. 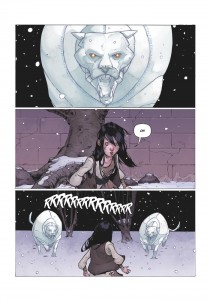 Benjamin Read and Chris Wildgoose take us for quite the ride with Porcelain: A Gothic Fairytale and it’s one I don’t regret ever taking, despite having feared, as I mentioned before that it would turn into yet another predictable horror story wannabe. By the time I was nearing the final pages I was on the edge of my seat, trying to guess what will happen because up until that point I had been wrong on most everything I had assumed about it. My advice for you when you start reading? Keep an open mind and hold off on assuming anything, you’ll be surprised either way, but you won’t have to admit you’ve been in the wrong about it.

Here’s the trailer for the story, giving you but a glimpse of what awaits for you if read it all. For those of you that would like to see even more of it, here’s a link to the first 16 pages of the novel: http://issuu.com/improperbooks/docs/porcelain_pdfpromo

What's there to say about me? I love the sci-fi and fantasy genre when I read, but I am in no way limited to that alone. I do think Frank Herbert deserves a statue for his writing(if there is one, point me in that direction, please). I enjoy writing quite a lot, but I am also kinda lazy. If you want to make me happy give me books or Doctor Who collectibles. Or a real TARDIS, in which case I will love you forever.
More Goodness
benjamin readchris wildgoosecomic book