Kori and Roy make for a believably flawed couple with problems. Insight into Roy's past. Ending has plenty of potential.

Green Arrow pays a visit to his old partner Roy and inadvertently makes a bad situation a lot worse. Meanwhile an amnesiac Jason Todd tries to discover more about his past and doesn’t like what he finds which could have major implications for his friends. 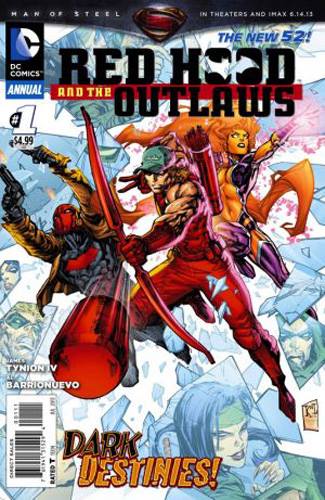 Red Hood and The Outlaws has had an inherent quirky charm to it since its first issue, built around a core trio of friends who don’t mind getting their hands dirty for a good reason. Recent events, though, lead to Jason Todd getting his memory wiped in an attempt to alleviate his feelings associated with his tortured past- only problem was Roy and Kori had to try and convince him they were his friends and remind him of who is.

Green Arrow’s arrival on the secret island where they have been hiding out signals the start of a rather bad turn of events for the trio.

There’s a lot going on in this issue, with Roy and Kori’s relationship and the way that neither of them are capable of actually comunicating properly and flashbacks to Roy’s past showing how much he’s changed as a person making up part of it. Elsewhere Jason is trying figure out who is, whether he believes or trusts Roy and Kori and Green Arrow’s arrival not only dredges up a lot of bad memories for Roy it also results in carnage as the island is now under siege from a cadre of bounty hunters wanting to cash in on the bounty on the trios heads which Green Arrow lead right to their target.

The way that Kori and Roy are both flawed makes them more endearing and Roy’s determination to not let things fall apart whilst at the same time admitting he’s a coward by saying what he wants to say to Kori who is still sleeping, or so he thinks, shows both his genuine feelings for her and his self-loathing coming to the surface.

Things soon descend into a brawl between Green Arrow and Jason after he has a rumble with Roy and assassin Cheshire who apparently trained with Jason which was briefly alluded to last issue.

What really lets this story down though is some truly awful dialogue and the compositions featuring Cheshire.

Having a sexy assassin is not exactly new for comics but Cheshire’s introduction here, standing over a prostrate Kori with her tiny skirt/robes swaying in the blowback from an explosion in the background and revealing her pants is crass and unneccessary. 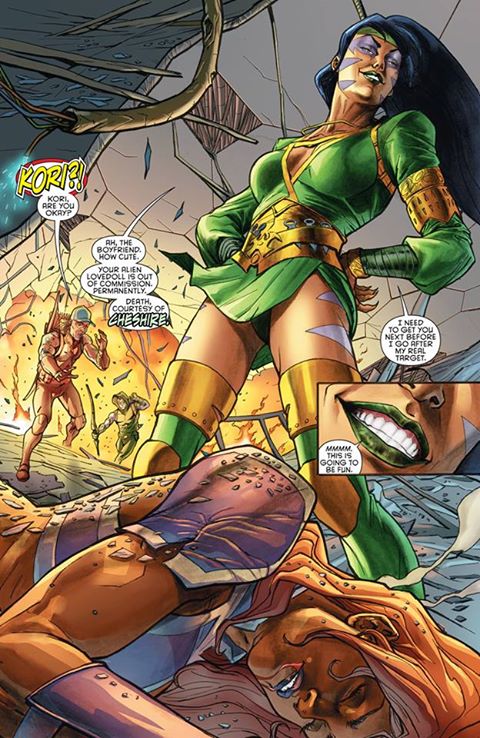 This isn’t just a one off either, numerous panels of Cheshire fighting Roy and Jason involve her leaping off or onto things and showing off her pants, I’m surprised they don’t feature a skull to indicate her victims imminent demise since she seems to show them to all her targets.

This is just bad, it’s bad composition, especially that introductory image but it’s the worst kind of cheesy too this isn’t helped by her telling Roy ‘You could be my special man pet’ whilst bending over him.

It’s interesting the contrast between Kori and Cheshire, Kori’s well known for her ‘sexy’ look but kicks ass and is a great character too.

Cheshire actually looks pretty bad ass when done by a different artist, which just makes this worse as this whole sequence could have been done a lot better.

This bad dialogue is contagious too with Roy saying ‘Stop being sexy and fight me dammit!’ as she is jumping around.

Whilst there’s a great ending to this issue which has plenty of potential and there’s plenty of insight into Roy’s background it’s overshadowed by the poor composition choices for the fight involving Cheshire.

In a stark contrast to the last few issues, the art from Al Barrionuevo is bland and features numerous poor compositions besides the problems raised above.

For anyone picking this up to see what Red Hood and The Outlaws is like, it won’t be convincing them they’ve been missing out.