Great atmospheric art and character designs.
Something a little different.
Bonus content for those interested in the real Robert Burns.

Some of the charm may be lost on those not familiar with Burns.

Recommended for those that want something a little different with some real cultural heritage. 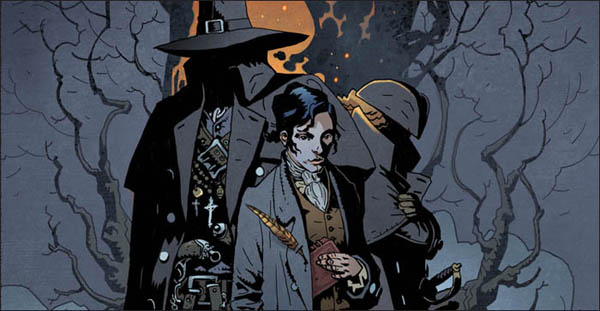 Robbie Burns: Witch Hunter, published by Renegade Arts Entertainment, comes from the creative team of writers Gordon Rennie and Emma Beeby along with artist Tiernen Trevallion. Taking one of Burns’ most famous works, Tam o’ Shanter, the comic plays on the idea that the events described therein are actually based on events Burns experienced one eventful night.

A famed writer/poet’s work being based on surreal events from their own lives is a rich idea and Rennie and Beeby get some comedic mileage from contrasting the romanticised image of a poet with the Burns featured here, his introduction finding him in a drunken brawl after apparently fooling around with another man’s woman before promptly vomiting all over the street and getting his face shoved in it by the larger and irate transgressor.

It’s when the drunken Burns goes riding into the night on his horse whilst trying to compose his latest ode, stumbling upon an occult coven engaged in a ritual that the story really shifts a gear. Burns isn’t the only one to discover the ritual, witch hunters McKay and Meg have been tracking the coven. Burns soon ruins the pair’s stealthy approach though having being entranced by the seductive leader of the coven.

Some of Robbie Burns: Witch Hunter‘s charm may be lost on those not familiar with the Scottish poet but that doesn’t make it any less engaging as a story. Rennie and Beeby’s dialogue has a distinctly authentic Scottish feel to it which might leave some readers a little puzzled but meanings are well conveyed in the context. One of the best things about this is avoiding the cliched trap of having two male witch hunters, McKay is the senior of the two while Meg is the younger and isn’t there just to look pretty either.

Tiernen Trevallion’s art is atmospheric and definitely adds to the appeal of the unfolding narrative. There’s some great creature designs throughout, with Trevallion clearly suited to stories featuring supernatural elements. One of the great touches is the book also features a biography of Burns written by Jerry Brannigan, co-author of Robert Burns in Edinburgh, along with a selection of Burns poems alongside illustrations. This is the kind of thing that makes this book ideal for those wanting to learn about the story’s inspiration and about Burns himself.

Robbie Burns: Witch Hunter is definitely something a bit different and recommended to those that like something besides superheroes in their sequential art or have an interest in history and culture.

Andy Haigh started writing to counteract the brain atrophying effects of Retail Hell, now it's an addiction. Andy is an unrepentant sequential art absorbist and comics are one of his passions. Other interests include Film, Music, Science Fiction and Horror novels and quality TV like Game of Thrones. He can talk about these at great length if only someone would listen. He lives a somewhat hermit like life in The Shire, spends too much time on social media and is still waiting to go on an adventure.
More Goodness
breakingcomicsGordon Rennie