This more than any of Avatar's titles isn't for the faint hearted or easily offended.

Churchill hears news of the Ubermensch. Freya makes a break for freedom and Hitler makes a devastating display of power.

Kieron Gillen‘s Uber is a hot property, with it’s initial issue #0 selling out and the following enhanced edition reprint selling out prompting another reprint – issue #1 has sold out too on a retailer level.

Whilst Avatar may be known for its ‘no holds barred’ styled titles Uber manages to upstage them all.

Opening up on a full page shot of Adolf Hitler with a gun in his mouth definitely gets the attention, Taking place in the final days of World War II, Hitler as anyone with a knowledge of history knows is a broken man and defeated and this plays into events in this issue. That Hitler himself has no knowledge of the Ubermensch features into both the beginning and ending of this issue

A scene in the Cabinet War Rooms of London, featuring a despondent Winston Churchill, reacting to the news of the decimation wrought by the Ubermensch in Berlin, shows the sheer futility in the unfolding situation. Knowing he can’t disclose the whole truth to the public, he opts to inform them of the Ubermensch but also say that the British also have their own super soldiers. 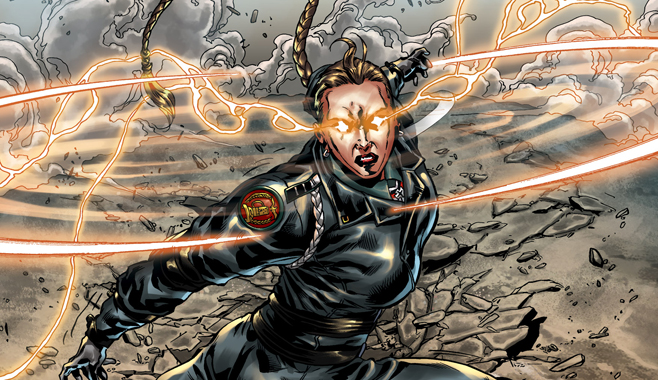 This ties in with Freya’s story as it is revealed she is a deep cover British agent with her mission to bring back secrets of the Ubermensch for using by the British forces to combat the new Nazi threat.

This issue is moving numerous pieces into place and Freya’s mission and escape from the Reich is sure to be one of the driving forces behind this narrative.

Time is also major factor in Uber with numerous mentions of the date and time in various locations down to the exact minute.

Gillen apparently has a plan to visit numerous countries and portray their reactions to the unfolding crisis as an arms race unfolds but with super soldiers instead of munitions.

Canaan White impresses again with his visceral and brutal style, with the closing double spread being a memorable display of his ability to handle epic scenes. Keith Williams inks add another level with Avatar mainstays Digikore providing the colour with a muted palette which really makes the use of the Ubermensch’s powers really stand off the page.

Most of all though it’s the tone of Uber which makes it stand out – this isn’t tongue in cheek nazi’s with superpowers fun – it’s a brutal and horrific exercise in the grim reality of war, amplified by the idea of an even more unhinged Hitler possessing extreme power. Unlike Avatar’s other offerings there’s a distinct absence of the usual humour to be found here.

Even in Freya the character the reader is supposed to be rooting for as she flees, it’s blatantly clear that she is no hero in the classical sense, a scene of her stubbing out cigarettes on her arm makes her self-loathing starkly evident and those that that have read issue #0 will know where this stems from.

Gillen’s poignant afterword about a train journey on Remembrance Sunday makes a powerful accompaniment to the preceding pages too.

Andy Haigh started writing to counteract the brain atrophying effects of Retail Hell, now it's an addiction. Andy is an unrepentant sequential art absorbist and comics are one of his passions. Other interests include Film, Music, Science Fiction and Horror novels and quality TV like Game of Thrones. He can talk about these at great length if only someone would listen. He lives a somewhat hermit like life in The Shire, spends too much time on social media and is still waiting to go on an adventure.
More Goodness
avatarbreakingCanaan White