previous
Butterfly Gate
random
next
Knight and Dragon - Be ready for it!
Books and Comics
0 likes

It's interesting, gripping, not to mention it's the final book of the Divergent trilogy. The anticipation alone is enough to keep you interested.

It's lagging at times, the pace is awkward in some places, but more importantly it's the end of a trilogy I came to love.

A few years ago Veronica Roth wrote Divergent, winning over thousands of fans with a story that, while not unique, was gripping and interesting enough to keep everyone happy and eager for more. Insurgent continued the trend, the story drawing in the fans with the promise of more adventures from the lead character Tris Prior, her former instructor and boyfriend Tobias Eaton and all the other characters that, while mostly secondary, were developed carefully enough to keep us all interested in them as well.

Allegiant is the last book in the series, the trilogy ending with the publishing of the final novel just a few days ago. Much anticipated, Allegiant had a lot of expectations to meet- and in my opinion it succeeded in doing just that. 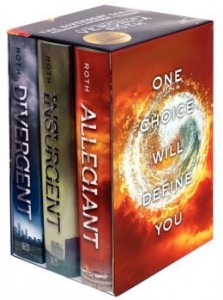 Veronica Roth has made choices that not a lot of authors would’ve made, but in my opinion they served the exact purpose they were intended for. They forced people to break out of their own patterns when reading, they forced them to accept that there isn’t always a happy ending, not even between the pages of a book.

As the story of Allegiant advances, the point of view switches between Tris Prior and Tobias Eaton, something that’s different from the first two books where we could only rely on Tris to learn about the world of the Faction-divided Chicago. The second point of view was a little difficult to adjust to at first, mostly because Tobias’s voice was so different from Tris’s, his own ideas being formulated in a completely different manner. It’s something that a lot of authors fail to achieve when switching between narrators, making the speakers sound like bad copies of one another. You can see a lot more maturity in Tobias’s  part of the book, but you can also see his self-loathing, his flaws, all splayed out for our reading pleasure. The almost perfect man that we had seen through Tris’s eyes up until now becomes suddenly fleshed out, layered and complex, more so than I think we had seen in Divergent and Insurgent.

We also see Tris in a different way, since she tended to have a different view of herself than he does. We’re not limited anymore in our assessment of her by her own ideas of who or how she is, we see her through the eyes of an impartial (at least from time to time) outsider, Tobias, who points out her wrongs and her qualities, once again adding more to her than our own imagination could provide.

The setting has also changed, with the characters escaping their lives and Evelyn Johnson’s new regime, giving us the opportunity to see them in an unfamiliar setting, one that forces each of them to become different, to act and react according to a set of unfamiliar rules.

To be honest, I wasn’t particularly taken with the explanation of what Divergents are or why they are so needed, the new war between the GP (genetically pure/Divergents) and the GD (genetically damaged/the rest of the world) seemed a little forced, though in a world where all the information is so tightly controlled that whole cities, filled with thousands or millions of people, are unaware of what’s behind their own fences, it could actually occur. The whole Truman Show scenario was interesting, an allusion to the big brother, maybe? Given the way our own society is heading, it could be just that. I’ll go a little subjective and say I actually wanted them to remain in their own little world and continue their adventures there. While the end justified the change, finally bringing some form of peace to this broken, dystopian world, it was still mildly jarring, given how attached I became to their old world, their old rules. I think we, as readers, will have the same reaction when turning the pages as the characters did when met with this fascinating “outside” that they had never even imagined, and Veronica Roth truly succeeded in bringing that same feeling of being unsettled to us that the characters seemed to experience.

Just to clarify something important, I am not upset the main character was killed. Once she died I realised the switch of perspective had a deeper meaning, with her gone the book would’ve ended mid-sentence. I think it was a bold choice and a justified one, even though thousands of fans are upset about it. Tris had become something of a miracle girl: immune to everything, hurt only to mildly incapacitate her, the voice of reason against all sort of odds. I might sound harsh, but it was becoming a little too much for me. If she had stayed alive she would’ve ended up a character that would’ve been trapped in the same cycle as all the “villains” before her, since in her mind, at least from my perspective, she seemed unable to do any wrong. Her dialogue was peppered with her belief that she was somehow better, because she had been, statistically, right more often than she had been wrong, something that was proving to be, at least to me, a little hard to stomach. She was still a girl and her views were skewed by her own experiences, personality and temperament. Her forgetting a lot of her own wrongdoings when condemning others of the very same deeds was grating, and while I doubt Veronica Roth chose to end Tris’s life to keep her from becoming obnoxious and annoying, I am still glad it happened.

She died a heroine instead of leading a life that would’ve changed and destroyed her. The epilogue had a bit of a Harry Potter vibe to it, only because I compared Veronica Roth’s high death toll to that of J.K. Rowling’s in Deathly Hallows. The epilogue served no real purpose, other than to tell us that at long last the world is mending, that the ones that have survived are living well and moving on. In a way it’s actually a good way to remind people to let go of things, because only then will they actually be able to put the past behind them, as the characters have proved that it could happen.

All in all? A great read, I finished the book in about four and a half hours, mostly because I just couldn’t put it down. Make sure you give it a fair chance before you decide to treat Veronica Roth like she’s a leper for killing your favourite characters (though seriously, Veronica: Uriah?) because in John Green’s words: “As a reader, I don’t feel a story has an obligation to make me happy. I want stories to show me a bigger world than the one I know.”

What's there to say about me? I love the sci-fi and fantasy genre when I read, but I am in no way limited to that alone. I do think Frank Herbert deserves a statue for his writing(if there is one, point me in that direction, please). I enjoy writing quite a lot, but I am also kinda lazy. If you want to make me happy give me books or Doctor Who collectibles. Or a real TARDIS, in which case I will love you forever.
More Goodness
allegiantbook reviewdivergent