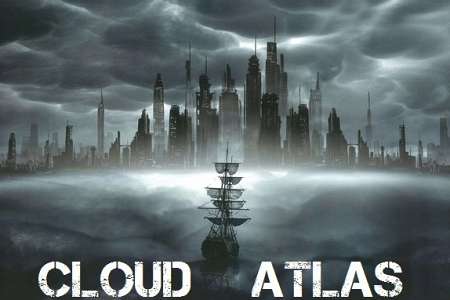 “Our lives are not our own. We are bound to others, past and present, and by each crime and every kindness, we birth our future.”

Straight to the point

It’s the first time, in a very long time, that I actually left the theatre feeling like I could, or should, change the world. This is definitely one of the best movies I’ve seen in a very long time, one that everyone should watch right now so we can all fawn over it together!

I have just returned from watching Cloud Atlas, a movie I’ve been anticipating ever since I first heard it being praised left and right. I have to say that I think some of those that proclaimed it a masterpiece were probably simply following the crowd, since Cloud Atlas is not a film to everyone’s tastes. It’s convoluted and at time hard to follow, with not real disclosure in sight for the better part of the movie and yet it succeeds in doing something that the more “linear” type of cinema fails to achieve. It makes you feel like you could get off your comfortable chair and do something to change the world in which we all believe we’re trapped in. In a way it gives you hope. I was wondering like many others what exactly is going to be the conclusion of the film, how are they going to justify the three hours of my life that I have spent in a cinema, but while the solution wasn’t apparent, the feeling of elation that the movie manages to instil was enough to make me leave the theatre satisfied.

The main point that the film tries to make, is that the world and everything and everyone in it is connected. Spanning time and space, there is a link that will lead from one even to the other, without fail causing a snowball effect that will ultimately change the world, whether for the better or for the worse, remains to be seen. The action is scattered through time, starting in 1864 and moving forward through the ages up until a distant future where nothing seems recognizable other than the basic human instincts that lay dormant in each one of us, despite our claims to the contrary. We get zapped through time and space at a maddening pace, that is at times confusing and makes you crave more of a single story, only to be torn away and thrown into another, but things start to become clearer as more clues and hints pile up to lead you to the much desired answer.

While the story itself is interesting to a fault, it wouldn’t work without the actors that bring it to life. Tom Hanks, Brian Wishaw, Halle Berry, Hugo Weaving, Hugh Grant (and the list could go on) each play more than one character, sometimes so spectacularly well that you won’t even realize it was them in the first place. I think it’s what makes the story so magical in the end, despite the sometimes difficult to follow pace and rhythm of the movie. The science-fiction mingles with tales of slavery, the story of dreamers mixes with that of freedom fighters and for once, everybody wins. Cloud Atlas has no real losers, in a way it made me think of those inspirational songs that urge you to dream big, to never give up. Ultimately you’re bound to have at least a small success, all you have to do is keep pushing forward even if you know that the obstacles you meet might ultimately defeat you.

Cloud Atlas was based on a book, one that I think everyone will want to read after seeing this, if they haven’t done it before, but regardless of that, it’s a grade A film that deserves all the positive reviews it got, for both the storyline and the spectacular acting, with an added pinch of perfectly crafted special effects and amazing landscapes that while brilliant and beautiful, don’t steal anything from the story, allowing the characters to take center stage.

Don’t miss this movie while it’s in theatres, it’s an experience that no television set will be able to replicate to it’s full value.