Did you hug your Groot today?

Okay, we know it, we’re on a Groot high. Suddenly the bonsai all over the world get more love than ever, what with people actually googling how to care for them. Why this sudden adoration for random vegetation? (yes, I am aware of the lame rhyme) The explanation is simple: it’s all because of this guy: 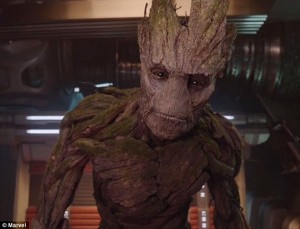 Unfamiliar with him and suddenly afraid of spoilers? Step away from your laptop, close your eyes and pretend you saw nothing, because spoilers by the bucket-load are to follow. (I assure you, it’s all a gross exaggeration). But going back to Groot now. The tree like creature, a Flora Colossus from Planet X, if you feel the need to be specific, has captured the hearts of people all over the world, with his childlike innocence and inability to say anything beyond “I am Groot.” At least until that soul destroying moment that left half the theatre in tears. However, there is more to Groot than that, as hints suggested throughout Guardians of the Galaxy. Leaving aside the fact that bar his inability to convey his thoughts by stringing more than three words together, he’s obviously intelligent, he’s also not quite as innocent as one might think.

Remember him spearing through half a dozen people, slamming them against walls and smiling innocently when he was done? Yeah? Well…I do. I still adore him, don’t get me wrong, but I also like Ramsay Bolton (formerly known as Snow), so when it comes to making the best choices, my moral barometer isn’t the best.

My point is, I think we’re all forgetting – following that adorable dance scene, when he was finally re-awoken, post his heroic sacrifice – that Groot is an integral part of the team and not just some sweet, button eyed mascot. I am convinced that a lot of people forget that he did more than create flowers, eat leaves and put on the most impressive firework show since New Years Eve (all with the very natural help of fireflies).

Groot killed for his friends, he demonstrated loyalty and maybe even a small degree of being slightly twisted throughout the movie, so let’s not forget that when we look at his adorable, leafy hands wave around to the beat of the songs from the Awesome Mix Vol. 1. If we look at his history (one that might hopefully be explored in the second instalment of the movie) we’ll see that he’s done some less than savoury things before becoming heroic, though in this movie the focus seemed to have fallen on most everyone’s background, but his.

Let’s face it, having Rocket complain about being mistreated and having fits over being called vermin was much more entertaining than say, having Groot repeat: “I am Groot!” in different tonalities, trying to convey his story for half an hour, yet I can’t help but feel that his character got the short end of the stick. Perhaps fans familiar with the comic can shed some light on whether the situation is the same in the comic or it’s simply the movie’s choice to give him less of a story, focusing instead on giving him comic relief scenes and a heroic sacrifice that have endeared him to the world.

Well, that and dance moves, cause he’s definitely got them. Funny how things turned out though, since he’s probably the most popular character, despite more “in your face” options existing. I’m looking at you Peter Quill, Gamora, Rocket and Drax. But hey, you didn’t die heroically, only to turn into a chibi version of yourselves, so…maybe next time?