DON’T PANIC! A celebration of The Hitchhiker’s Guide to the Galaxy 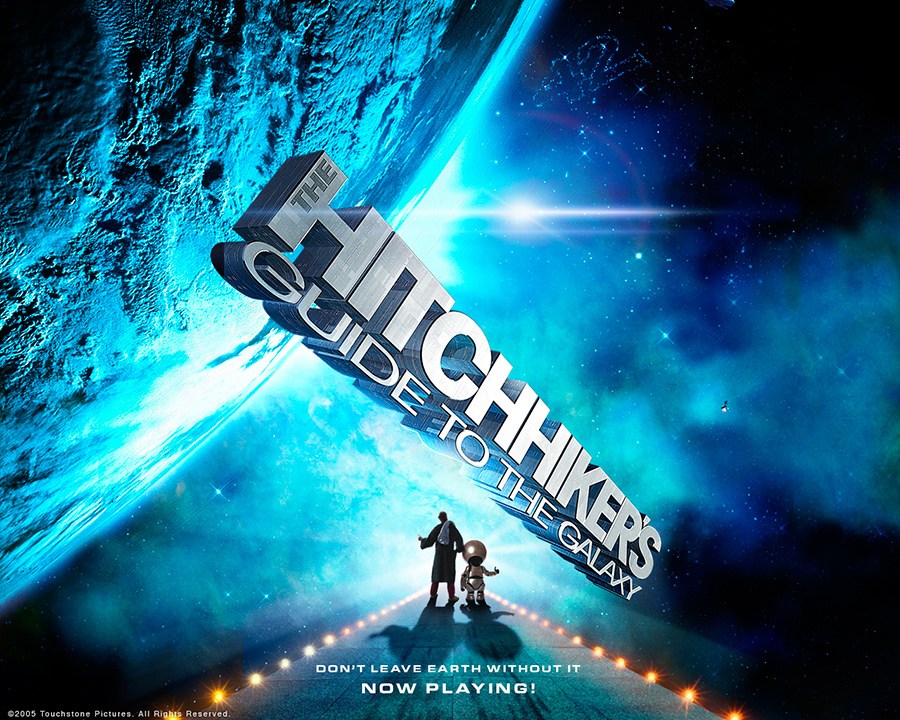 Forty years ago today, an earth shattering piece of radio was broadcast for the first time.  Radio, for those who may not know, is an analogue version of Skype before the internet was even first thought of and even before home computers were considered a pretty neat idea.

This revelatory piece of radio was The Hitchhiker’s Guide to the Galaxy.

The Hitchhiker’s Guide to the Galaxy follows the adventures of Arthur Dent, a man who has just had his house demolished, followed by his planet; and Ford Prefect, a roving researcher for The Hitchhiker’s Guide to the Galaxy book – a repository of all knowledge that the intergalactic hitchhiker will need to see the wonders of the universe for less than thirty Altairian dollars a day and has the words “Don’t Panic!” inscribed in large friendly letters on the front cover.

Joining them on their adventure is Zaphod Beeblebrox, who is president of the galaxy (a role that involves no power whatsoever, and merely requires the incumbent to attract attention so no one wonders who’s really in charge), Trillian who Arthur previously knew as Tricia McMillan on Earth before she escape with Zaphod, and Marvin the paranoid android, a robot with prototype GPP (genuine people personality) from the Sirius Cybernetics corporation, the only profitable division of which is its Complaints division, which takes up all of the major landmasses on the first three planets in the Sirius Tau system.

Getting The Hitchhiker’s Guide to the Galaxy on air was far trickier than one might imagine.  Hence, Douglas Adams relied on Simon Brett for the pilot before Geoffrey Perkins took over for the subsequent two seasons.  BBC bureaucracy is such that The Hitchhiker’s Guide to the Galaxy was at times a drama just in order for it to pass approval.  According to one interview, it was never comedy, as listeners would “never know which speaker the joke was coming from…”

Until then, Radio 4’s sound effects included enough door bells, footsteps and horns to last until the coming of the great prophet Zarquon.  However, it was less prepared for the sounds effects of a Vogon constructor fleet, an electronic sub-etha signalling device and the destruction of Earth.  So naturally, they palmed it off on to the BBC Radiophonic Workshop and hoped it would go away.

This proved to be an incredibly good idea and the resulting radio series filled many people with feelings of great joy and happiness.  Even the ones without digital watches.

The Hitchhiker’s Guide to the Galaxy has come to be seen as one of the greatest pieces of science fiction in the modern age.  More popular than the ‘Celestial Home Care Omnibus’, better selling than ‘Fifty-three More Things to do in Zero Gravity’, and more controversial than Oolon Colluphid’s trilogy of philosophical blockbusters ‘Where God Went Wrong’, ‘Some More of God’s Greatest Mistakes’ and ‘Who is this God Person Anyway?’.

In The Hitchhiker’s Guide to the Galaxy, Douglas Adams’ appeal is not so much as a science fiction writer, but a satirist and humourist.  The fact that his stories take place in outer space and involve space ships is inconsequential to the fact that these are stories mocking the realities of modern life.  Douglas Adams was a man both bemused and fascinated by technology, as well as the sheer absurdity of modern life.

There is a lyrical quality to The Hitchhiker’s Guide to the Galaxy, unlike any other, where Douglas Adams extends the narrative logic to absurd yet relatable conclusions.

Since then, it has spawned more radio, a book series that redefined the concept of ‘trilogy’ to include six books, a television series, a video game, a film, a live performance, a towel, fan conventions, a top forty hit by Marvin the Paranoid Android and international towel day (25th May) –it is vitally important to always know where your towel is.

The cultural influence of this wholly remarkable book is such that the number 42 has come to be universally recognised as the answer to life, the universe and everything.  We are still no closer to knowing what the question is though.

Elon Musk had the words “DON’T PANIC” inscribed on the dashboard of his car that is currently carrying ‘Starman’ towards the asteroid belt, after being launched into deep space by a Falcon Heavy rocket.  However, if being strapped in a car, heading into the furthest reaches of deep space with nothing but David Bowie’s Space Oddity on repeat is not the time to panic, when is?

But, what does the future hold for the Hitchhiker’[s Guide to the Galaxy?  Is now the time for it to retire quietly to bed to be mournfully hailed as an icon of its time?  It is unlikely to be saying “So long and thanks for all the fish,” any time soon.

The original cast has been reunited to record a new radio series of the intergalactic comedy.  Rather than this being new material, it is based on unpublished material from Adams’ notebooks, as well as newer plotlines drawn from And Another Thing, Eoin Colfer’s book that continued the saga.

Yet, could there be more?  Could there even be something new for a 50th anniversary? Probably not.  Douglas Adams is sadly no longer with us, and this latest edition of The Hitchhiker’s Guide to the Galaxy was based on his last remaining notes.  Instead, the future could well be reinterpretations of the now classic premise, such as what we have seen with Agatha Christie’s Poirot or Arthur Conan Doyle’s Sherlock Holmes.

But now is the time to grab your towel, don your Joo Janta 200 super-chromatic peril sensitive sunglasses and hold tight, because it is a time to hitch a ride across the galaxy in the Hexagonal Phase of that wholly remarkable book; The Hitchhiker’s Guide to the Galaxy…