If you’re reading this review, then odds are that you know the pain of waiting for months on end to see how Daryl and Merle got out of the arena. Given that Daryl’s a key member of the group, it goes without saying that they aren’t in the arena for very long, but by episodes end everybody knows about everybody, so no more secrets for anyone. However, this is still an emotionally trying episode that will have many fans riled up, if you haven’t already seen the episode.

Sorry guys, I’m the only American on the staff here at Geek Pride. I saw it last Sunday, when it aired in North America. If you haven’t already downloaded it, then be courteous to the rest of the audience waiting for it to go on air.

All that being said, we caught a glimpse of what the rest of the season’s going to look like. The Governor has lost his patience, Merle and Daryl are on their own, Glenn and Maggie have hit a rough patch, Tyrone’s group are still on thin ice, and Rick’s made his newly found insanity known to the entire group.

Drama like this is what networks like AMC feed off of for ratings and commercials. They know that by this point, the fans are too invested in these characters to see them in this state without wanting to know how it gets resolved. They see the division of the characters and the drama that it creates, because they’ve done this before. They warmed us up for it last season, with the Rick vs. Shane feud creating factions within the group, resulting in Shane’s death. Which brings me to my next point. 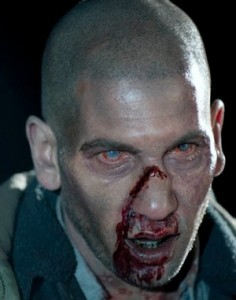 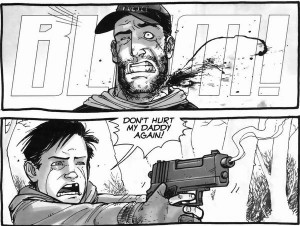 And those are just some of the differences between the show and the books. Having said that, I can tell you right now that most of the material from volumes 5 and 6 were taken out completely, so the Prison saga has been narrowed down to volumes 4 and 7, with small parts from 5 and 6. Anyone who’s read that far knows the trauma that lays ahead, but what I can say is that the emotional trouble with the midseason premiere is NOTHING compared to the storm that’s coming.

So brace yourself, Junkies. AMC’s doing you a favor by giving you something of a warm up. As the Governor even says, “this is war.”

An aspiring filmmaker coming from a military family, my solitary life allowed me to gain an intimate knowledge of geekdom. I specialize on horror and military, but I am also knowledgeable on science fiction, fantasy, comic books and classic cartoons.
More Goodness
breakingreviewseason 3