Straight to the point; The 4th and final season; this ultra-violent yet engrossing show goes out with a bang. And it’s one hell of a ride…

Many a tear was shed in the Walklate villa on Monday night as the last ever episode of Spartacus was finally aired, after 4 seasons and 3 years of swords, sand and Jupiter’s Cock. But now the show has finally reached its inevitably painful conclusion; it’s time to take a step back and look at one of the most popular shows on TV for the past 3 years.

Spartacus is a unique TV show; in that it’s a show everyone loves to watch, despite the fact that it’s one of the cheesiest, raunchiest, certainly the most preposterously violent show on tv at the moment. Anyone that has watched even a single episode will have no doubt seen the lady bits (and indeed male bits) on show almost continuously, or the rivers of blood that gush forth from the slightest paper cut, and that’s not even mentioning the writing (“Fuck the gods; remove cock from ass, and set mind to purpose!”). You’d expect some might be turned off by one thing or the other, but it seems everyone love it; from action-thirsty young adults to my 60 year old work colleague who cheekily loves to admit “it’s a bit rude, isn’t it!”. This is why, to me, this is a show that is a lot deeper than it seems on the surface, and one that simply cannot be missed. 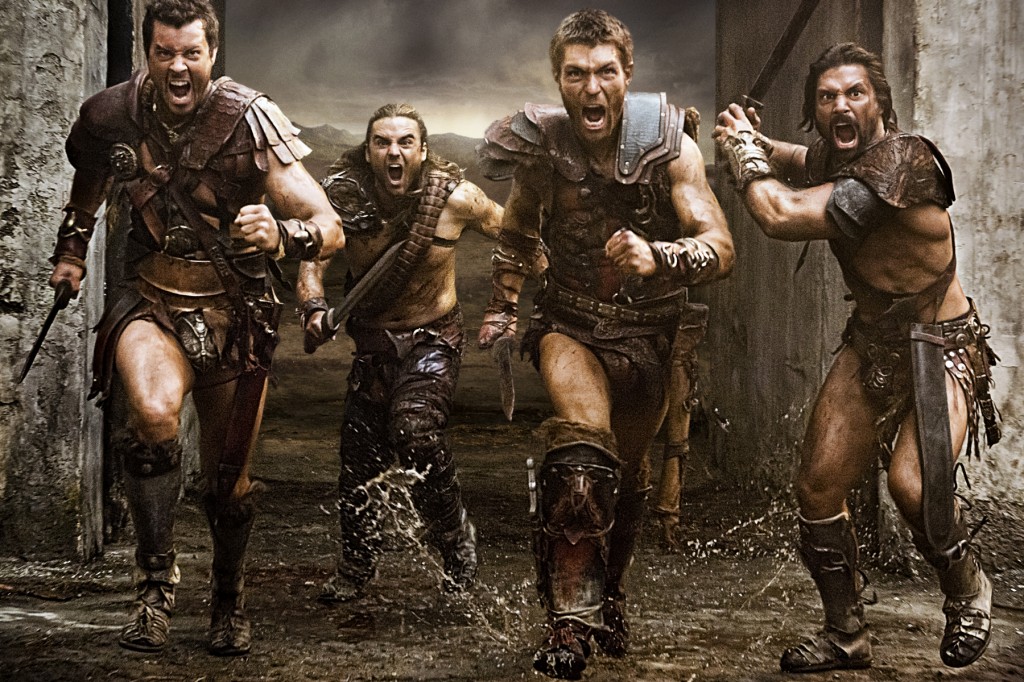 After finally defeating their nemesis, Gaius Claudius Glabber, in epic style at the end of the last season; many were wondering how American TV network Starz was planning to up the stakes. It seems we had nothing to worry about, as thev have managed to do so in almost every way. Now their rival’s gizzards are firmly splattered up the walls of a roman villa, and more slaves are joining his cause every day, Spartacus is beginning to gain the advantage. However as everyone knows, while a bigger army brings bigger battles and bigger action; it also brings bigger problems. Up until now, Spartacus has been about slaves vying for freedom, and importantly, being on the back foot; always scrambling to fight their way out of each new situation the Roman legions face them with. Now, Spartacus has responsibilities.

This season then, doesn’t so much change the pace of the series; it manages to keep the pace going while introducing a sense of responsibility, and the problems this causes. After all, this is an area Spartacus knows little about. Starz genuinely do an excellent job of showing the difficulty of leadership; Spartacus’ gladiator brethren simply want to take the fight to the enemy and inflict retribution on the Romans, however Spartacus quickly learns that being a leader is more than fighting. He doesn’t command an army anymore; he commands a huge population, including women, children, the elderly and infirm. Consequently, one could say that the theme of this series is power, and conflicting ideologies. Spartacus is constantly faced with incredibly tough choices, and he must carefully toe the line between doing what’s right to keep his people safe, while also trying to placate (and occasionally indulge) his gladiator brother’s insatiable thirst for vengeance and war. Inevitably, Spartacus’ decisions are bound to displease one group or another, and as such Spartacus spends a lot of this series battling simply to keep his people together.

All this isn’t to say the series lacks for action, however. The Roman Senate has understandably had quite enough of Spartacus’ shenanigans, thank you very much; so they decide to go all out by appointing an Imperator of Rome, in the form of Marcus Crassus. The most feared and respected commander in the Republic; Crassus gives plenty of opportunity for the series’ signature excellently choreographed, beautifully violent and furious battles, including some all out huge fights between armies (compared with the skirmishes we’ve seen in the past). To go along with this, Spartacus and his brothers have still not forgotten about their origins; while the drama might’ve moved out of the arena; it still remains firmly rooted in our ex-gladiator’s minds and actions. 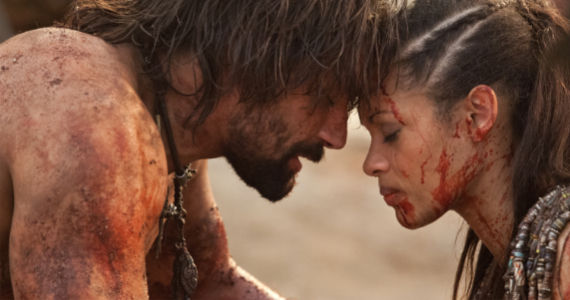 Liam Macintyre returns as the titular Thracian gladiator/rebel leader Spartacus, along with his loyal brothers in arms Crixus, Gannicus, Agron and of course everyone’s favourite German berserker, Lugo. I’ve always thought the casting to be absolutely spot-on for Spartacus himself; Liam does a great job of giving a commanding authority and instilling a sense of respect for one of history’s most famous heroes, taking up the mantle brilliantly after the actor in the first season, Andy Whitfield, sadly passed away after series one. Equally, Manu Bennet returns as a personal favourite character of mine; the gruff, rash, strong, yet loyal and honorable Crixus, “The Undefeated Gaul”. Dustin Clare also returns as the boisterous, wine-quaffing womanizer Gannicus, and Daniel Feuerriegel and Pana Hema Taylor also deserve a mention for their portrayal of Agron and Nasir; a homosexual couple in an open relationship; one of the only relationships of its kind currently being portrayed on TV, and one that both actors do so very honestly and touchingly.

Steven S DeKnight returns as well; bringing with him the same excellent writing and characterisation. Old favourites all have large parts and individual storylines, and are also joined by the occasional smattering of new talent here and there. Of course, the witty and original profanities and insults are all back with a vengeance as well (“Words fall from your mouth as …. falls from….!”). DeKnight also does an excellent job of blurring the lines between good and bad; as we see a more human side to Spartacus’ enemies. Crassus is a fiercely intelligent and skilful character, and goes to great lengths to train, fight and think like a gladiator so he can better fight Spartacus. Crassus may not empathise with Spartacus, but understands why he is revolting. Similarly now we no longer have some faceless bad guy to shake our fists at; just like Crassus, we have an adversary that we may not empathise with, but can certainly respect and understand. 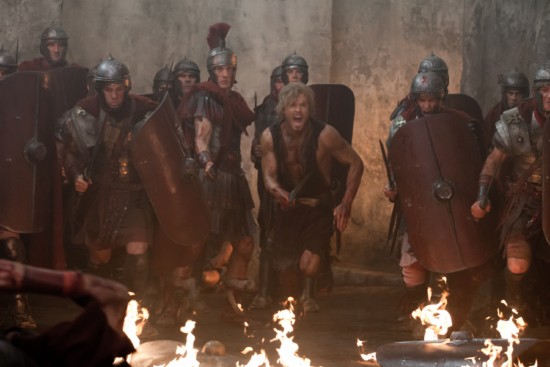 Crassus also has a son who he is training to become leader, as well as a slave who he is in love with and genuinely cares about on a deeper level than just baseless sex or as a means to an end; both relationships we haven’t seen before from a Roman point of view, and ones which bring a sympathetic dimension to a character we are supposed to despise. However, Crassus also adds another new degree to the show; a sense of intrigue. His cunning mind constantly plots schemes to advance his status and bring down Spartacus in the most glorious and insidious fashion possible; starting with planting a spy right in the middle of Spartacus’ ranks…

Of course there’s one elephant in the room we need to discuss; and that’s the ending. It’s the final season, and this is one of the most famous stories in history; so we obviously know how it’s going to end. However I will say that just because we knew, in absolutely no way did it diminish our enjoyment of the series. And it really is as simple as that. Spartacus is a great piece of historical drama heavily interspersed with a great swords and sandals epic. Sure, it’s over the top, and it’s cheesy, but neither reason’s good enough to stop me from recommending it. 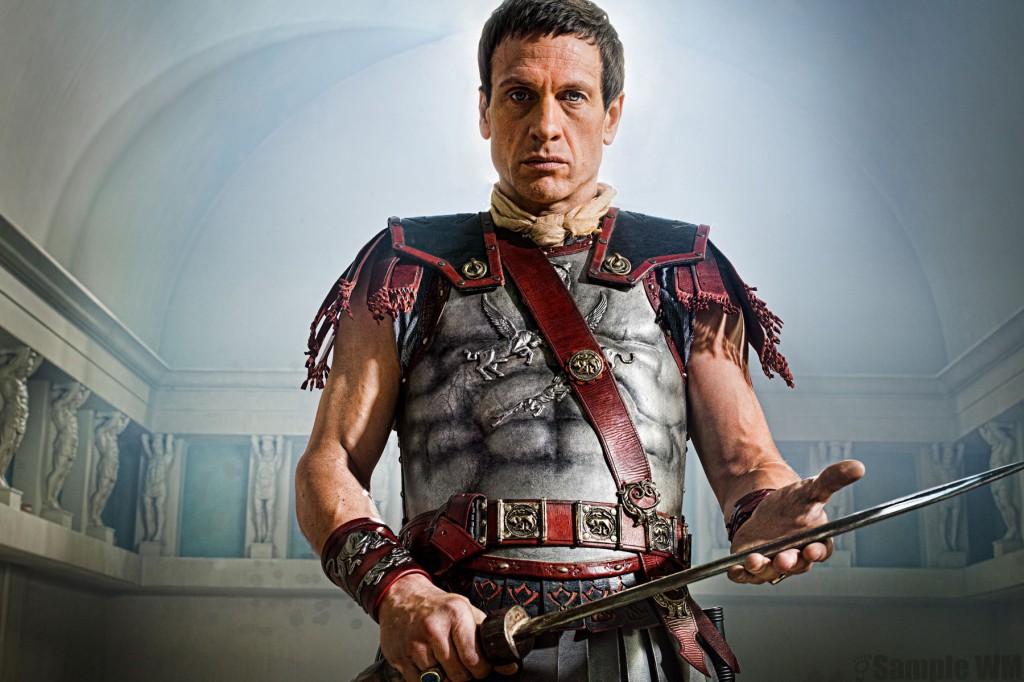 The “blood and boobs” opinion that the show carries actually hides a very deep story, which will draw you in completely if you give it but half a chance. Here is a show that has action, sex, blood, and enough creative swearing to make Jay & Silent Bob do a double take, but one that also has a very engaging plot, one that tackles a lot of interesting issues and paints the legend of Spartacus in a new, interesting, and most importantly; very entertaining way. When the credits finally began to roll on Monday night, the Walklate household was almost in tears that it was over. In a show like this, it’s not about plot twists, or spoiling the end, it’s about enjoying the ride. And what a ride it is.

Matt, 24 last time he checked, was born and raised in Manchester. A self-styled geek; when he isn't annoying his other half by fitting in as much gaming time as he possibly can, he can be found getting his fix of Fantasy and Sci-Fi elsewhere by reading, writing, or watching TV Series and Films. He is also a Michelin 3-Starred Chef in his spare time, and can be found experimenting in the kitchen, and generally poisoning his friends with obscure and mysterious dishes.
More Goodness
finalRomeSeason