previous
The Girl With All The Gifts Trailer
random
next
Top 10 Game of Thrones Duos: Romance, Bromance and Captivity
Film and TV
0 likes

With the official confirmation of what we all already expected – that Darth Vader will be be in Rogue One: A Star Wars Story, kicking ass and surviving the entire film in order to maintain continuity – the question became who would be providing the voice? It would seem like an obvious choice, given that the sultry-tongued James Earl Jones is still around, but even Disney’s movie execs haven’t always been known for their impeccable decision making *cough cough*.

Well, thankfully, the right decision has been made and Earl Jones has been confirmed as once more providing the menacing words for some overtall dancer in a presumably-updated Vader outfit. Speaking to Entertainment Weekly, Lucasfilm president Kathleen Kennedy confirmed that the 85 year old (holy what?! 85?) would be reprising his voice acting role as Lord Vader. 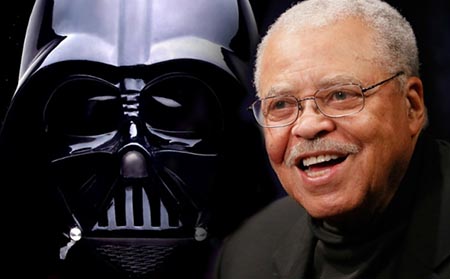 Look at that happy face!

In the same interview, she also stated that Lord Darth Anakin Skywalker Vader would only be used sparingly, like hot sauce for any rational human being.

“He will be in the movie sparingly,” she says. “But at a key, strategic moment, he’s going to loom large.”

Loom large, you say? That makes it sound like he’s going to be standing around menacingly, not stabbing rebels in the gut with his laser sword. Which, I don’t think I’m alone in saying, is what most people would want from a Darth Vader cinematic outing.

Well, we’ll just have to see, won’t we? Hell, it could even have an appearance like this for all we know…

Sean is an editor, writer, and podcast host at Geek Pride, as well as a novelist. His self-published works can be found at all good eBook stores.
More Goodness
darth vaderfilmsnews