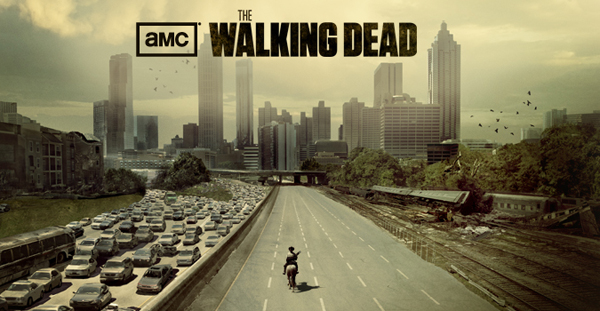 Disclaimer for the unwary :the following will be spoilerific for The Walking Dead both the TV series and the Image comic so if you’re an “ERMEHGERD SPOILERS!” type then just stop reading now and go make a cup of tea or go for a nice walk and enjoy the fresh/ polluted air or something.

With that out of the way, let’s look at the problem at the core of AMC’s The Walking Dead.

The Walking Dead being a big hit for AMC is kind of a big deal, because it proved two things:

a) you can actually make a TV series based on a comic that isn’t about superheroes.

b) that you can make a horror based TV series.

Neither of these things were really present 10 years ago. The idea of a TV series set during a zombie apocalypse would’ve been a horror fans daydream fodder.Whilst AMC’s The Walking Dead is based on the Image Comics  (written by Robert Kirkman with art from Terry Moore initially and then Charlie Adlard and Cliff Rathburn), both are two different mediums. This has resulted in various changes, some of these changes have been positive or at least interesting, like several characters that died fairly early in the comics like Carol and Shane have been used in a different manner narratively, whilst other characters like Daryl and Merle despite being created for the series have been fundamental to its popularity.It’s proof positive that diversifying from source material can actually work incredibly well if executed with skill, just take a look at The 100 .

Some changes though haven’t really resulted in a positive effect, with various characters being reduced to pale imitations of what fans might expect.  The character of Andrea, for example (played by Laurie Holden) not only differed drastically from her source material counterpart (who is one of the few characters still alive despite being there at the beginning and also becomes another badass powerful female character to rival fan favourite Michonne) she also died in Season 3 after getting tangled up in a relationship with The Governor in Woodbury. Tyreese (played by Chad Coleman) suffered badly in the translation process too, becoming little more than a glorified babysitter and a pacifist reluctant fighter rather than Rick’s right hand man and one of the main stays of the group with a talent for melee fighting rather than being reliant on firearms. 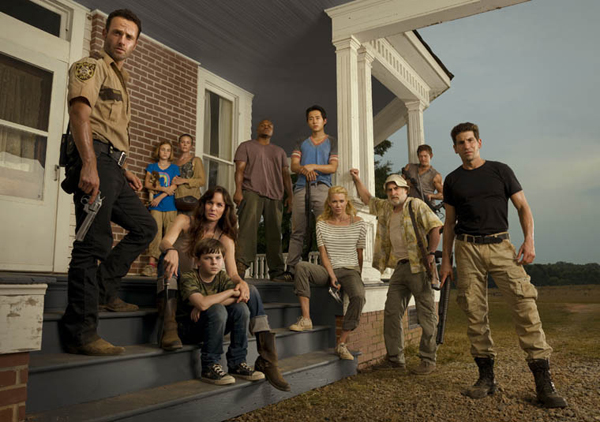 The main reason for watching The Walking Dead? Waiting to see if the next episode is as good as you think it could be and finding out it isn’t (even if it is better than Gotham, which isn’t hard though).

The main problem with The Walking Dead? The writers might be taking story cues from the source material but the best they can do is offer them in a diluted form. AMC’s series struggles with not being as brutal or disturbing as the source material that it is based on and the writing is incredibly inconsistent and the characterisation so all over the place half the characters are merely ciphers. Honest trailers brilliantly lampooned The Walking Dead a while back and things really haven’t changed. Whilst the core group of Rick, Carl, Carol, Daryl, Michonne, Abraham, Eugene, Maggie and Glen might have been around long enough to actually have had a bit of character development, emphasis on the bit, the cast is bloated with other characters that have so little development you forget they even exist until they pop up again and then die in an arbitrary manner which has no impact because you didn’t care about them anyway.

You can have a large cast and still have characters that are well developed, just look at Game Of Thrones! That has the largest cast of any TV series pretty much.

The Walking Dead has tried to build a world where living is about hard won survival, a world where life is cheap and people are far more dangerous than the zombies that make up the back drop of everyday life. Some have called The Walking Dead “misery porn”, but actually it’s pretty cheery compared to the grim brutality that Rick and company deal with in the comics which is balanced out by almost constant momentum. Momentum is something the TV series generally lacks. The world of a firmly entrenched zombie apocalypse is convincing thanks to a great credits sequence with a haunting theme by Bear McCreary and the amazing special effects make up from Greg Nicotero but this world doesn’t stand much scrutiny on a narrative level. 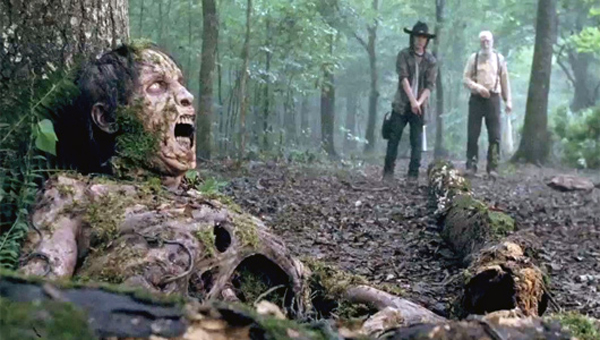 A good example is Judith; throughout The Walking Dead’s several seasons one of the cornerstones of the world is finding food. It’s distinctly problematic at best and life threatening at worst and can lead to days of hunger , yet somehow Judith is still alive despite this. Judith represents hope for the future which is in short supply and killing Judith will just bum everyone out or something because babies can’t die but shooting kids in the head is fine.

Anyone who has read the comic will know that Judith didn’t last long dying in a rather brutal manner being crushed to death by her mother Laurie who was carrying her when she was shot trying to flee the prison where lots of people died, this brings us to another major point of contention namely The Governor.

The Governor as he featured in the comic was an utterly sadistic sociopath and the leader of the people of Woodbury. There are glaring differences between the character in the comic and the character in the series (like the relationship with Andrea for one). Some of the major differences though are, after meeting him, The Governor hacks one of Rick’s hands off with a machete to try and force him to give up the location of their base the prison, when this doesn’t work The Governor then brutally tortures and rapes Michonne who is also captive at Woodbury giving her an ultimatum – he will shoot her in the head as a mercy if she gives up the prison or she will remain his personal play thing. Glenn who is held captive in a room next to hers listens to this unfolding.

For the series Rick got to keep his hand and the above sequence became a scene featuring The Governor threatening Maggie with Glenn in the next room listening, it was creepy but in no way paints The Governor as the vile monster he should be. There’s a lot of debate about rape as a narrative device but this was a prime example of how the series utterly neutered one of the major antagonists, a character you are supposed to hate and be scared of just like Rick and the survivors do. 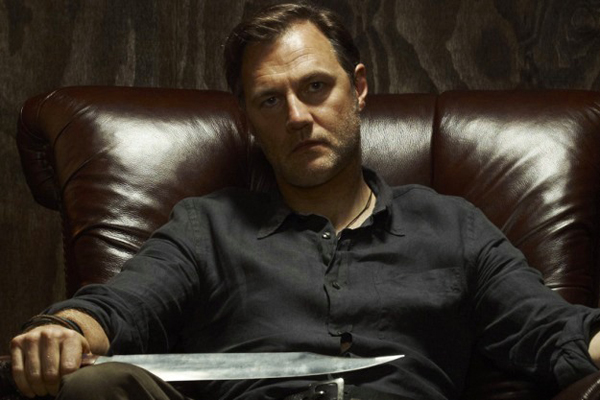 The Governor is supposed to be inhuman, the idea that all villains need to be sympathetic is a narrative idea that robs antagonists of their ability to instil terror. The Governor represents Rick and the rest of the survivors worst fears made flesh, the worst of humanity and the distillation of the idea that people are far more dangerous than zombies. Michonne’s brutal and horrific treatment at the hands of The Governor  is the catalyst for her furious and righteous vengeance which is just as brutal as the treatment she received (I should note that Michonne’s torture and rape didn’t even have to be shown, nobody wants a pornotastic Straw Dogs rape scene, it could’ve easily been implied rather than shown if handled right and more effective for it) . By omitting this they’ve robbed both characters of a major defining moments. This righteous fury is reduced to Michonne stabbing The Governor in the eye when in the comic she exacts a far more bloody revenge and here it lacks the catharsis and context too, there’s no real deep seated hatred between The Governor and Michonne here because there’s no reason for it aside from the overall framing narrative of Rick and the survivors versus The Governor’s army.

Reasons why The Governor being a subhuman degenerate rapist scumbag with a taste for mutilation matters? Their treatment at Woodbury utterly entrenches a fear and paranoia of strangers for the group but especially for Rick, Glen and Michonne and makes them become the people they would avoid, their encounter with The Hunters only escalates this. Another major point though is it also contrasts majorly with the other main antagonist of The Walking Dead – Neegan.

Rick and the survivors first encounter Neegan some time after finding the Alexandria safe zone, which they’ve just done recently in Season 5. Neegan is the sadistic and mentally unhinged leader of a large community based somewhere not too far away from the Alexandria safe zone. Neegan’s group is running a protection racket with several scattered communities giving Neegan half their supplies in exchange for his “protection”. Rick taking umbrage at this tries to take Neegan on the way he and his group have handled previous antagonists and it goes horribly, horribly wrong. As punishment Glen is brutally bludgeoned to death by Neegan whilst Rick and several others look on helplessly. One thing Neegan definitely isn’t though is a rapist. He actually brutally kills one of his own men after catching him trying to rape Andrea who is a prisoner at Neegans base. Without this important contrast The Governor and Neegan are very similar characters.

With the recently announced news that a spin off from The Walking Dead set somewhere else in the same world with different characters is set for at least two seasons I have to question whether anyone will be watching but more importantly will it just be more of the same potential and disappointment of the current series?

Andy Haigh started writing to counteract the brain atrophying effects of Retail Hell, now it's an addiction. Andy is an unrepentant sequential art absorbist and comics are one of his passions. Other interests include Film, Music, Science Fiction and Horror novels and quality TV like Game of Thrones. He can talk about these at great length if only someone would listen. He lives a somewhat hermit like life in The Shire, spends too much time on social media and is still waiting to go on an adventure.
More Goodness
AMCbreakingRobert Kirkman