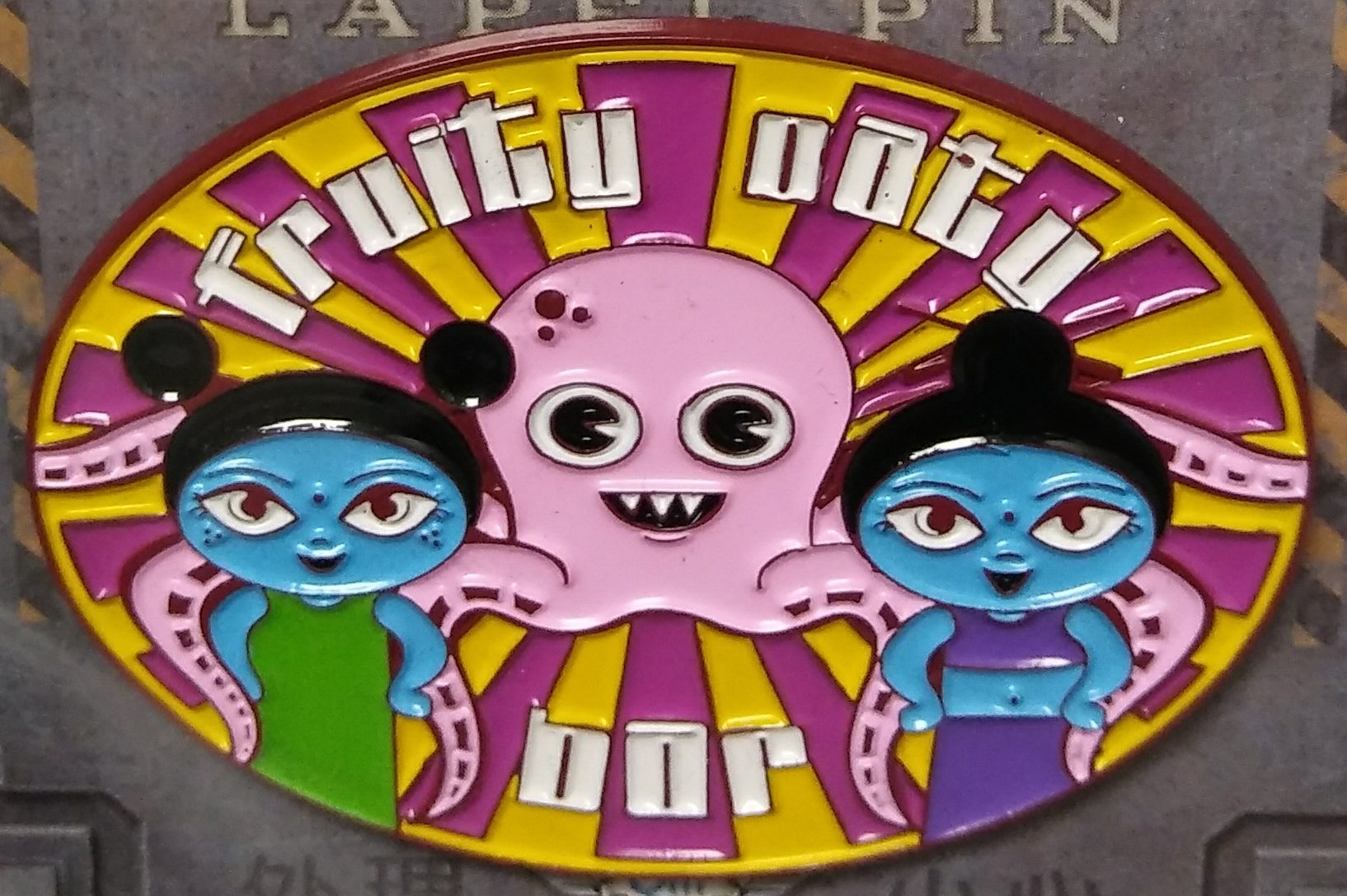 I’m back with another review for the oh-so-good Firefly Cargo Crate series. As I said last month, this month’s theme is “No Power in the ‘Verse”, dedicated to River Tam. River is one of the best sci-fi characters ever created (in my opinion, at least), so I’m looking forward to what’s in store this time around. Let’s take a look.

Up first, the sticker. 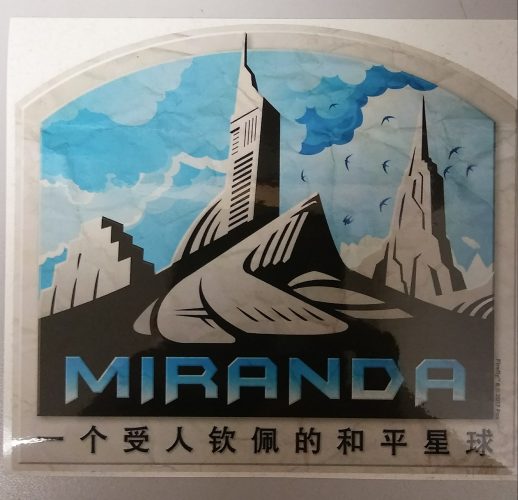 It is the logo for Miranda, the planet River discovered in Serenity that was revealed to have created the Pax, the drug that caused a portion of its users to mutate into Reavers while killing the rest. And speaking of Miranda… 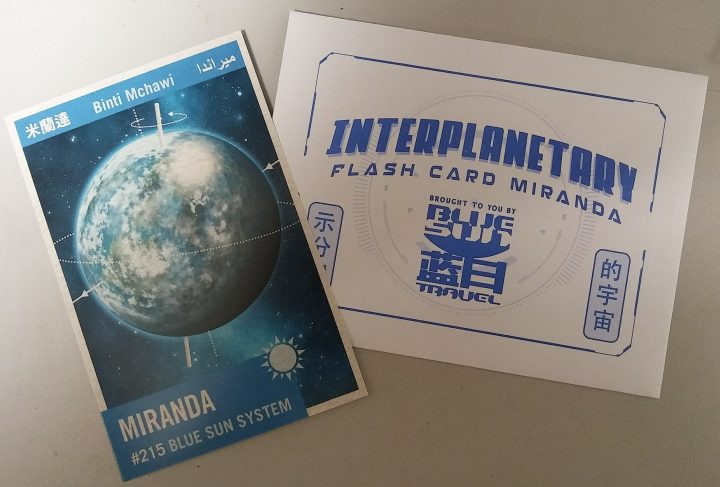 Another flashcard for the collection, with info about the planet on the reverse side. Not much to do with these, but the sticker goes with the rest of the collection, and as I’ve said before, the flashcards are good for fans who want all the information they can get on the ‘Verse.

The third item is an inflatable one, the first for the Cargo Crates. 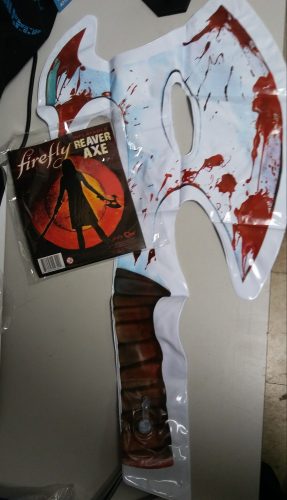 If you can’t tell, it’s an inflatable version of River’s ax from the climactic Reaver battle in Serenity. I have no real use for it, but I have a young daughter who loves River and has cosplayed as her in the past. If she wants to go that route again, this would work for a prop and wouldn’t be a concern at weapons-check (our convention has really cracked down on prop weapons due to safety concerns in response to incidents at other conventions). 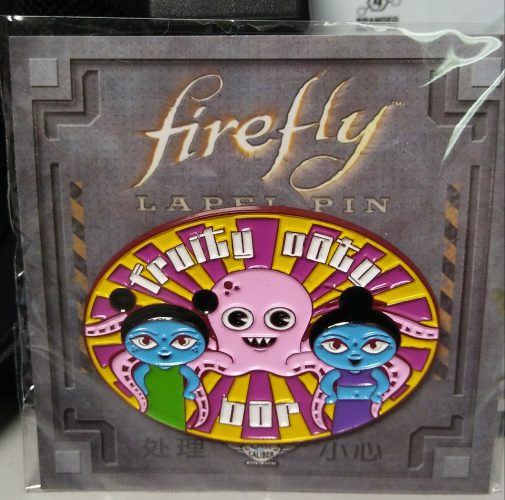 Inspired by the Fruity Oaty Bar logo that was used to pass subliminal messages in the movie, this is easily my favourite lapel pin ever to show up in these crates. It’s bright, colourful and features a lovely version of the iconic logo. So, because I’m super excited about this one, my wife of course wants it. She LOVES the Fruity Oaty Bar merchandise.

Moving on, we’ve got another piece of Fruity Oaty Bar goodness, in the form of a t-shirt. 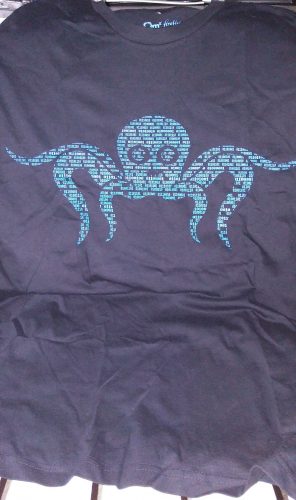 Again, inspired by the logo, this shirt features the octopus, only this time, it’s a version where the design is made of lines of code, a hidden message revealed by Mr. Universe. And of course my wife wanted this to. To be fair, I’ve taken nearly every shirt in these boxes, so I let it go, even though I love it. Now, this picture doesn’t do the shirt colour justice. It looks kind of blue here, but is in fact a deep black (the lighting in the room was bad), and the logo is a bit darker blue than the picture would indicate.

Okay, onto the last two items, which are both collectible. The first is a blind-box Q-Bit figure. Now, in the past, these have always been one of two choices, and you got one or the other at random. This time, however, there is only one, so no surprises. The one they chose is a good one, though. 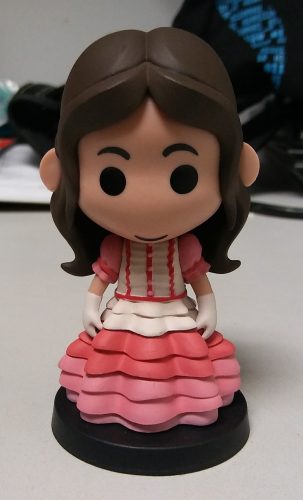 It’s the adorable Kaylee in her fancy dress from the Firefly episode “Shindig”. Although River was not the focus of the episode (those honours mainly went to Mal and Inara), she did play a crucial role in a confrontation with Badger. Although Jewel absolutely hated this dress in real life-as do cosplayers I’ve met who wear it-she looked amazing and this interpretation is perfectly cute.

And finally, we get to my favourite part, the Little Damn Heroes statue. 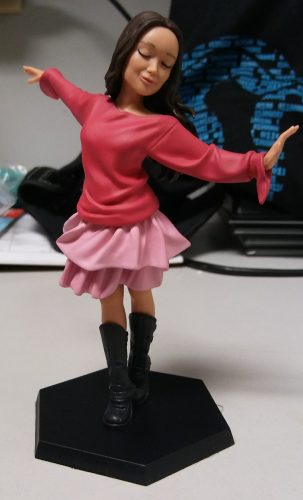 It’s of course River, in the outfit she wore in the episode “Safe”, where we learn some of the background of the Tams, as well as see them end up in a small community that is similar to a religious cult, where the residents believe River to be a witch. I love this statue as much as I love the rest (although maybe not as much as Kaylee, since I actually got to meet Jewel Staite. Nathan Fillion this year!). It’s colourful with great detail, with River looking graceful as she’s frozen mid-dance, something Summer Glau does in real life and incorporated into the character.

Another Cargo Crate, another winner. I’m bummed that my wife wanted the Fruity Oaty Bar stuff so much, but when both of us are fighting over items in these boxes, they have to be good. I still got the figure and the statue, and those are generally the most important items to me, so that’s a win. The only item I would consider a dud was the inflatable ax, but even then, it may get some use at some point.

Well, that’s all for this time. Next time, the theme will be “Going Mad”, with a focus on the other Tam, River’s older brother Simon. See you then!