Hey, everyone (all zero of you). I’m back with another review in the Firefly Cargo Crate series. This time, the theme is “Going Mad”, with a focus on Serenity’s resident doctor, Simon Tam.

As always, let’s take care of the sticker first. 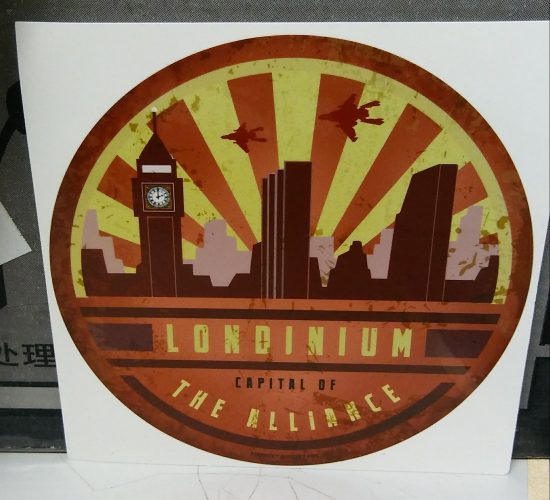 Londinium, as you can see by the sticker, is the capital of the Alliance, and was one of the first two planets settled after the exodus from Earth-What-Was. Although the planet is essentially supposed to be comparable to the United States of America (according to Joss Whedon himself), the name and logo clearly have a London influence, and in fact the word “London” comes from the original settlement’s Latin name, Londinium. Although the planet is not explored much over the course of the show and movie, it was referenced in both, at the very beginning of the film, as well as in the pilot episode, “Serenity”, during a brief conversation between Simon and Mal.

Speaking of Londinium, we have another item bearing its likeness. 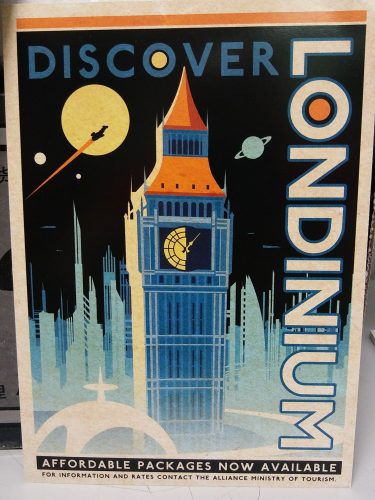 Although it looks like a mini-poster, it is in fact a functional postcard, which could make for a cool souvenir for fans. I really like the design, and am considering putting it in a nice frame to add to my ever-growing collection of stuff hanging on the walls.

The next item is a pair of gloves. Latex gloves. 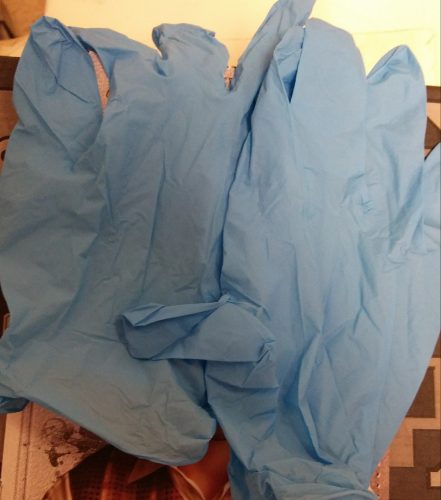 There’s really not much to tell here. These are standard blue latex gloves, a reference to the Hands of Blue the mysterious contractors hired by the Union of Allied Planets to find the Tams in a pair of episodes of the series (“The Train Job” and “Ariel”)as well as the comic Serenity: Those Left Behind. There’s nothing special about these gloves, and they’re no different than ones you’d buy at a grocery or medical supply store; just something of a silly gag item for fun.

Item number four is the lapel pin, and I’m pretty happy about this one. 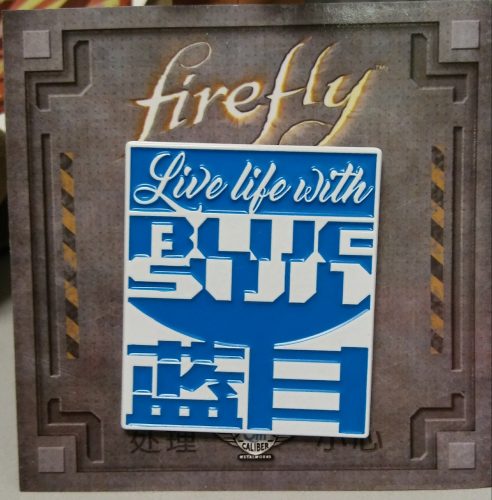 The iconic Blue Sun logo is one of my favourite designs from the entire franchise, so much so I’m considering getting it tattooed on me. Although not detailed much in the show, the Blue Sun Corporation is a massive company that reaches every planet in the ‘Verse, providing products of all types for all needs. That’s not to say there’s no shadiness or corporate espionage going on with them, however. According to the official Firefly: A Celebration book, there were plans for an episode of the show all about Blue Sun, explaining their past and influence across the ‘Verse. Sadly, the show got canceled before that happened.

There’s another Blue Sun item in this box, and by happenstance, one I needed. 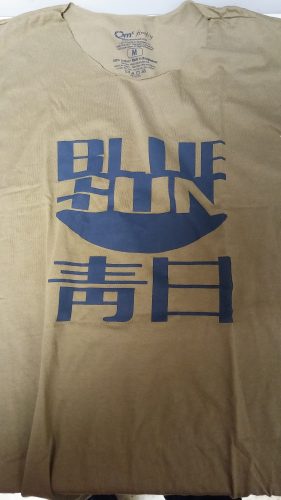 It’s an exact replica of Jayne’s Blue Sun shirt, seen in “Bushwhacked” and “Ariel”, with the sleeves and neck pre-cut, making it especially good for cosplay. I had this regular t-shirt (albeit a different colour) and had to cut the sleeves off due to them not fitting right. I think the girl at the convention booth may have sold me a women’s cut on accident. Needless to say, it wound up becoming a gym shirt. Now, I’ve got a new one, and it has the added benefit of basically being a tanktop for regular wear, I don’t have a lot of regular tanktops, so this is good, especially with the warm weather here lately. Plus, it’s the same material QMx uses in all their other shirts, so it’s very soft and breathable.

Okay, three more items. Up next is the latest Qbits figure.

It’s Mal, in his spacesuit, first seen in “Bushwhacked”. Simon later adorns a suit as a practical joke by Jayne and Mal while exploring the derelict ship. This is actually the first Mal collectible that has appeared in these boxes, not counting pins with slogans on them. Not sure why it took them so long to get us a Mal item, but better late than never. I love these figures, and I especially love that series 2 is getting into more unique characters and costumes for them.

Simon gets his own Little Damn Heroes statue this month.

Pretty good likeness, and I like the addition of the steampunk-like work goggles (which he did wear in the show). I love these statues, and I’m happy to add this to the collection. We’re just missing Inara and Mal from the main cast, but I believe Inara is in the next box, so I’ll have them all soon enough.

Finally, we have an item that I am very interested in, as I’ve never had one before. 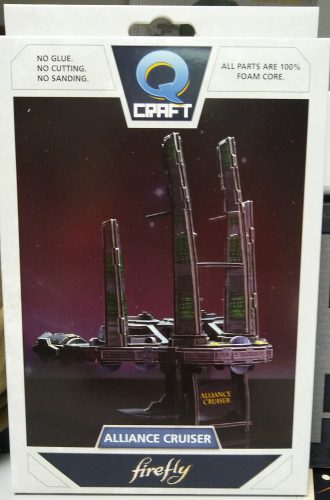 This is a paper-craft puzzle/model of the Alliance Cruiser, and I’m both excited and nervous to put it together. On one hand, I think it’s going to be a fun activity, on the other, I’m worried about bending or cutting the pieces in incorrect ways, because I know exactly how I operate. Still, this is really cool, and I’d like to see more stuff like this in future Crates (metal-craft would be sweet).

Well, that’s it for this installment. Some really great items this time around, and I really like everything that came in the box. The gloves are a bit silly, but at least they were appropriate with the theme. All the other items were really cool, and I continue to be impressed with this subscription service.

I’ll be back in two months with the next Crate, where the theme will be “Wicked Ways”, featuring Inara. See you then!

I am straight edge and a freelance writer currently working for several sites. I also do personal training. Currently, you can see my weekly WWE Smackdown recaps on CamelClutchBlog.com, video game reviews on BurningAngel.com (warning: although I only write game reviews there, it is an adult entertainment site) and mostly wrestling-related stuff on Man Cave Daily (mancave.cbslocal.com).
You might also like
Adam BaldwinBox Subscriptionsfirefly