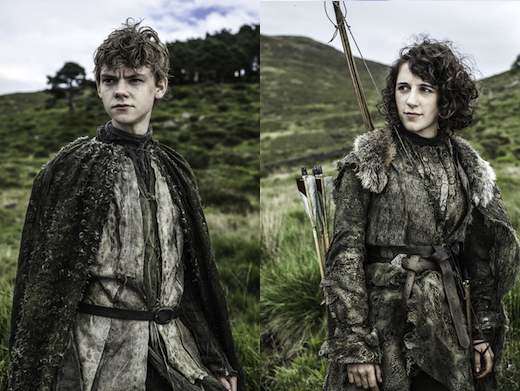 If you’ve been reading my regular reviews of Season 3’s episodes then you’ll have noticed they come out very, very close to the release date for each episode… and that this episode was delayed somewhat. This is because I prefer to watch the episodes at my leisure and forgot to tape this week’s, leaving me at the mercy of the internet. Which promptly failed me, as my provider decided to fail to live up to their role.

As I am so delayed, I’m not going to go through the scenes and discuss the underlying themes – such as duality, which was rife, frankly – and more concentrate on a wider element which this episode relied heavily on; the additional content and scenes of Game of Thrones.

In the books, very little of this episode happens; Loras and Cersei are not scheduled to be wed at all, Arya does not meet Melisandre, Sam does not sing to Gilly. We do not see Jojen having a fit during a prophetic vision. And some of it happens but is implied rather than actually shown, such as the continued torture of Theon and Joffrey’s first slaughter. In the books this works brilliantly, leaving subtle clues which I certainly didn’t pick up on during my first readthrough, and allows the reader to discover and delve and ponder at their leisure.

But, as I’ve talked about previously, an adaptation does not need to be and should not necessarily be a complete reproduction and Game of Thrones is displaying this brilliantly. Despite much of this episode not being in the source story, it is a well-produced and fascinating 53 minutes and an excellent mid-season finale, as it were.

The changes were necessary. It is fine in the books for Theon to just disappear for ages and suddenly, horrifically, come back. It is fine for Littlefinger to mention his ‘wealthy client’ and for the reader to be left to piece it together. This is because writing is a subtle and delicate medium and good writing thrives on making you search between the lines, find deeper meaning. As you have a world woven around you with little more than markings on a page, it is fine for you to prod the spell that is being cast and for the artist to expect this of their audience.

Television, though, is not an imagination-driven medium. It is visual, aural and visceral in both senses. Metaphors tend to be represented on screen, such as with Littlefinger sitting and staring at the Iron Throne, or Brienne leaning across to aid Jaime cutting meat. They are small moments which require reflection but weave in to a larger story, an immediate and explicit story being shown before you. It cannot be expected of a television audience that Theon’s disappearance and return would have the same impact because of the likely years in our world between the events. It is better, for fans of the books and those who only watch the series, to see Theon’s torture not only because this is a visual medium but because it makes for good telly.

I enjoy seeing what the producers, writers, actors and indeed GRRM are doing with the Song of Ice and Fire books. They are distilling and adding something more, making clear what was implied but also hinting strongly at what will happen in the books yet to come. Like the Queen of Thorns and Tywin Lannister, they are differing but equal and both should be thoroughly enjoyed for the individual but shared works that they are.