previous
Sundance London Set to Return
random
next
WWE: Was this year's show the most memorable WrestleMania! of all time? 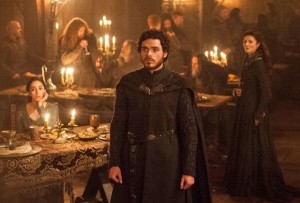 It’s been a long wait, but tonight we were finally welcomed back to Westeros with the season four premiere of Game of Thrones. After the action and spectacle of the closing episodes last year, we’re offered character development in the opening episode, as ‘Two Swords’ acts as a reminder of where most of the central characters are up to in the battle for the Iron Throne. Those of you who haven’t watched the episode yet, turn back now, you’ve already come to far. Also, what are you even doing with your life? Watch it, now.

Season three’s devastating Red Wedding is on everyone’s minds in tonight’s opener, with Robb Stark and co’s gruesome deaths the topic of conversation in Westeros, particularly in King’s Landing. We’re reminded instantly of this as Tywin Lannister is seen melting down the late Stark’s Valyrian Steel sword to create two of his own. The removal of the sword from the skin of a Direwolf is a fantastically symbolic, albeit unpleasant, reminder that the Stark’s of Winterfell are currently losing the battle for the Iron Throne. Tywin then offers Jaime one of the new Valyrian Steel swords and urges him to return home to watch over Casterly Rock, which our one-handed Lannister refuses. 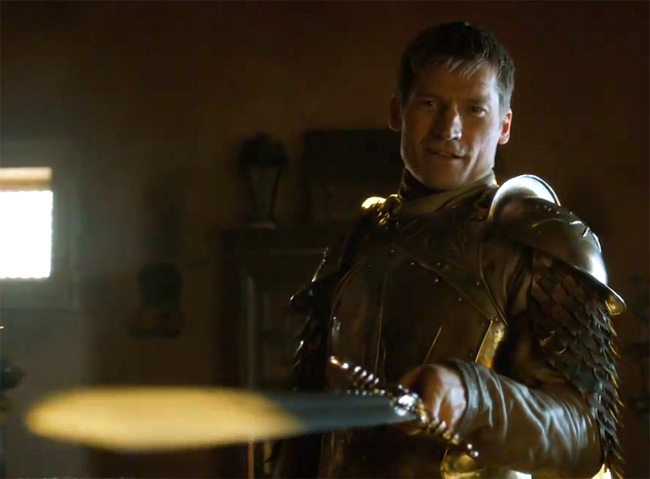 Jaime’s refusal of his Father’s decision for him to return to Casterly Rock, along with Cersei’s rejection of romance and Joffrey’s taunting, further distance him from the Lannister clan. Maybe Cersei just doesn’t like his new haircut. We’re almost seeing another Tyrion in the making here, as the once ‘Kingslayer’ seems unwanted in King’s Landing. He’s definitely becoming a more likeable character as the series goes on and possible plans to help Sansa are further indication of another Lannister on the turn.

There’s plenty of awkward exchanges for Tyrion too, as he tries to comfort young wife Sansa after the gruesome deaths of her family. That girl really can’t catch a break, it’s pretty tough being a Stark in King’s Landing. She’s witnessed her father’s beheading, was doomed to marry King prick, Joffrey, then offered up to his much older uncle. Perhaps she should stop moping around and grow some balls instead, like little sister Arya. 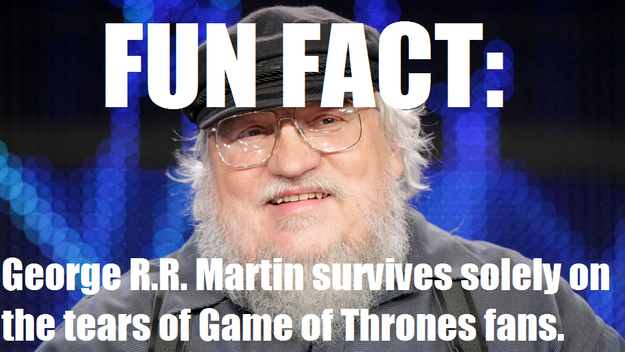 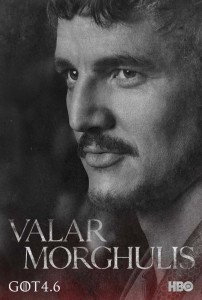 Arya’s bloodthirsty revenge at the end of the episode acts as an excellent closer and firmly reminds me of her place as my favourite Stark and hopefully we see plenty of her this season. Jon Snow on the other hand finds himself unwanted back at Castle Black, whilst warning the Night’s Watch of the Wildling army, who have now been joined by a bunch of cannibals.

As we travel further again from King’s Landing, we see Daenerys struggling to control her dragons as Jorah (a.k.a. Lord Friend Zone) reminds her that they cannot be tamed. She’s currently en route to another yet slave city whilst Jorah stares longingly and other men fight for her attention. Perhaps the most intriguing development tonight was the introduction to Lannister-hating Prince Oberyn, who causes trouble (and tries to have an orgy) at Littlefinger’s brothel. His appearance also managed to bring us full frontal female nudity pretty darn quickly in the episode. He’s set to be an interesting character this season, as a visitor for the Royal Wedding which there was little mention of tonight.

Overall, very little happened in the opening episode of season four, but that was to be expected. After the action and drama towards the end of season three, tonight’s episode ‘Two Swords’ has offered us an insight of the characters’ personal journeys, who are all pretty angry about one thing or another. Whilst Game of Thrones is often remembered for it’s spectacle, which we saw little of tonight, the premiere is proof that it also works on another level. That being said, it looks like the Royal Wedding is set to be the highlight of the season and there are definitely great things to come. Personally, I’m looking forward to Arya’s development after her bloodthirsty outburst and seeing Jaime move further from the Lannisters. Also, I’d like to see Joffrey punched in the face. Repeatedly.

Feel free to share your thoughts with us on tonight’s episode over on Facebook, but please avoid posting any spoilers, save those for comments on here. For now, Valar morghulis!

I'm an aspiring film journalist living in Chester. Into all kinds of geekery from N64 to Xbox, graphic novels, cosplay anime and more. I have an unhealthy obsession with Pokémon and the Legend of Zelda series. So much so that I have two Zelda tattoos and various Pokémon lurking all over my house. In my spare time when I'm not busy being a real person and working, I'm writing or making retro games jewellery. I'm also obsessed with pandas. They're fabulous.
You might also like
Game of throneshboLannister