GEEK OF THE WEEK # 1 – Chris Hartop and Ottie Fort 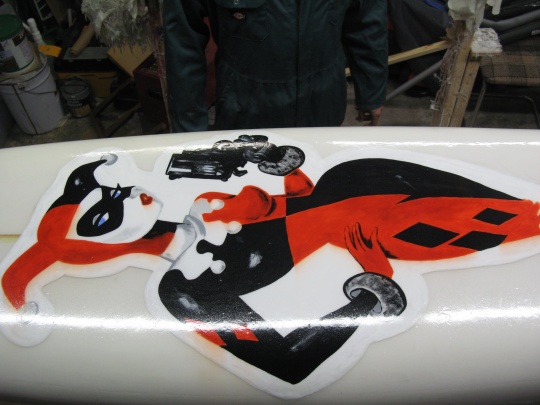 If you would like to be our next Geek of the Week then get in contact with us on facebook or email us @ Content@geek-pride.co.uk and tell us why you deserve the honour… photos and vids help btw!

And the Geek Gods did create some whose powers of Geekdom out matched the rest and they did name them…..

THE GEEK OF THE WEEK

This week’s ‘Geek of the Week’ hail from Cornwall (UK)  and have come to our attention through an awesome video they sent us showing how they made a Harley Quinn inspired surf board!

Geek guys and gals, It is my distinct pleasure to present to you Chris Hartop and Ottie Fort!

Geek Pride talked to our first Geeks of the week about their project and why they are proud to be geeks:

1. Ottie, Chris, you are Geek Prides first Geeks of the week anything you want to say at this moment of momentous glory?

Chris –  My whole life has been building to this moment. I’d like to thank my agent, my family..*weeps.

Ottie – Is this Geekfection? Is that possible?

2. So why Harley Quinn and why on a surf board? Big Batman fans or did you just think she looked cool?

Chris – I’ll leave Ottie to answer that one. I’m assured it’s a healthy obsession and learned to ignore the whispering.

Ottie – Harley Quinn has a big gun, she wears lycra and a wicked smile, and is the only girl bad enough for the happily homicidal Joker. What’s not to like? It’s been my favourite comic illustration for over a decade, and was the first logo for the poker league I started in 1999 (don’t use this, as dont want to come across as a promo and spoil the geek purity!, but for your viewing that was www.pokerjokers.co.uk). And I like to think I am a Batman fan… I own a collection of 200 graphic novels about the great man. It’s a bit like painting the Sydney Harbour bridge, you start at one end, and by the time you get to the end you have to start all over again! (I think I have read through them in sequence four times now).

3. One can only assume that with all the equipment you have in those pictures, that this is not the first you have both made? How long does it take usually and where do you “catch the waves” when it’s done?”[quote]

Chris – I’ve helped a whole bunch of obsessive-compulsive types make their first board. If you’re not a real Jedi until you’ve made your own lightsaber then it’s got to be the same with surfers right? As for where to ride the creations? If I told you I’d have to kill you.

Ottie – It’s the first board I have ever made, definitely not Chris’! He is the brains, I was the brawn. North Cornwall beaches do just nicely!

4. What other Geekary are you into?”

Chris – Sci-Fi, graphic novels, games, fantasy. You know, every long-haired surfer cliche you can think of

Ottie – Fantasy Football (very geeky for grown men) – http://http://home2.btconnect.com/totalteamwork/legend/ … poker is pretty geeky, though they like to pretend it isn’t (played about 500 games) and I still love Super Mario Galaxy (is it wrong to complete it, and still keep playing? my kids dont think so)

Chris – Complete Buffy and Angel series’ on the day of release…on VHS (the grain makes it look better, honest)! Neil Gaiman’s complete Sandman including signed copies and a rare signed misprint edition of “the wake”. Erm, does queuing up for the midnight release of both Xbox consoles count?

Ottie – Hmm. Well obviously there’s the Batman graphic novel collection. But apart from that… I do have a 1984 t-shirt and certificate for being an Activision High Scorer – they only gave out 50 awards to the best gamers in the UK (I was 14 at the time, and very pale as I didnt go out much!). I still have the Spiderman suit my mum made me (aged 36 – see link in question 4). And I did have the rare star wars figure, which is the grey bounty hunter IG-88 robot made just for the UK, but I just went to check him in the box and his bloody arms fallen off! … bastards. I also have the first issue of Bantha Tracks, the Star Wars fan club news letter… I know loads of people have it, but it still gives me a warm geeky perspiration 😉

6. What does being a geek mean to you?

Chris – I’d have to quote Simon Pegg…“Being a geek is all about being honest about what you enjoy and not being afraid to demonstrate that affection. It means never having to play it cool about how much you like something. It’s basically a license to proudly emote on a somewhat childish level rather than behave like a supposed adult. Being a geek is extremely liberating.”

Ottie – A friend of mine wrote an article recently in a magazine and quoted the words from an Apple Ad:

“Here’s to the crazy ones. The misfits. The Rebels. The Troublemakers.The Round Pegs in Square Holes. The Ones Who See Things Differently. They are not fond of rules. And they have no respect for the status quo. You can quote them, disagree with them, glorify or vilify them. About the only thing you cant do is ignore them. Because they change things. They push the human race forward. While some may see them as the crazy ones, we see genius. Because the people who are crazy enough to think they can change the world are the ones who do.”

7. Anything else you want to say?

Ottie – I know it’s wrong, but this recognition of Harley worship means more than getting my degree… which sadly wasnt a Bat Degree.