previous
It's a Bat-tastrophy.
random
next
Free Film Friday - Nosferatu

The only reason I didn’t do this last night is two-fold: 1) I was exhausted; 2) “Gangster Squad” was on, and my mother doesn’t like me being online when there’s a movie going.

I’ve been covering the Batcasting since it was announced (as you can see in my defense of Karl Urban as the bat), so suffice it to say that I didn’t exactly see the announcement coming. To be fair though, when Peter Cabaldi was announced as the next Doctor, my immediate reaction was “Who?!”

The internet’s responded, more or less, with this expression. 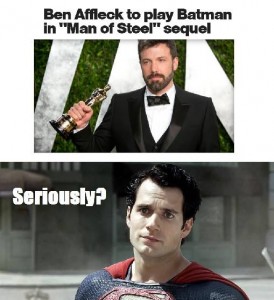 Affleck’s an old actor, working in the industry for almost 15 years, with a lot of time spent in the Director’s Chair, as we’ve seen with his recent forays in front of and behind the camera, with “The Town” and “Argo”. The prior being an adaptation of Chuck Hogan’s novel “Prince of Thieves  (of which I own the movie tie-in edition, with the movie’s title, don’t judge me), the latter being a filming of a true story that’s been declassified for 15 years. Luckily, we know that Snyder’s in the chair, so we don’t have to worry as much.

I’m going to cite fellow writer Erin Manzo with the internet’s complaints about the Batcasting, and return with a point-by-point Batrebuttal. Before you ask, yes, I can and will attach the word Bat to any noun I feel like when in this context. Shark-repellant Batspray, people. 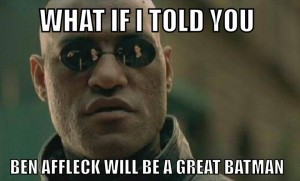 1) “He’s very much a known actor, and with that comes the risk that we’ll not see Batman, but rather Ben Affleck in a Batman suit.” He’s not the first big-name actor to don the role, as we’ll recall with the following image and why we hate him.

2) “Daredevil. I’m not sure I have to elaborate on that.” While many agree that Daredevil sucked, I think this is another example of the actor getting blamed for shitty writing. We’ve seen this before, with Timothy Dalton taking the heat for the darkness in “James Bond 007: License to Kill”, but that’s beside the point. Ben’s performance was actually pretty good, and I personally still love that movie.

3) “The interaction between Batman and Superman is less than overly friendly. In comics, we see a lot of sarcastic Bat-remarks and banter. There’s a struggle for dominance, and more often than not, Batman implies Superman is the less qualified superhero. I don’t think I can believe this coming from Affleck; nothing about him screams ‘dominant’ to me.” “Mallrats”, “Chasing Amy”, “Good Will Hunting”, “Daredevil”, I could keep going. ALL of these show him bantering someone else into submission (Jason Lee for the first two, Matt Damon, then Jon Favreau). I can’t WAIT to see him do this with Henry Cavill.

4) “There were better options.” There are ALWAYS better options. I was skeptical when Cavill was announced for “Man of Steel”, given that his two titles had been “Hellraiser: Hellworld” and “Immortals” (neither of which were very good), but I shut up when he blew me away. I was skeptical about Heath Ledger as the Joker, and I was skeptical about Tom Hardy as Bane. In both cases, I shut the fuck up because they blew me away. In all of these cases, good acting was coupled with good writing. Daredevil missed the latter, so everyone ignored the prior.

I’m in total agreement on this one. Snyder even said that they’re using this as a source of inspiration, and had one of the actors from “Man of Steel” read this monologue at SDCC. 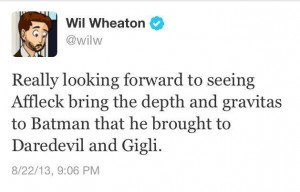 I have no response to this, really.

End of the day, I’m remaining optimistic. With Snyder and Goyer at the typewriter, I have faith, so let’s just hold it until we see it. Goyer’s blown us away before with unsuspecting actors. 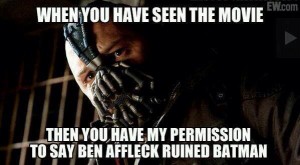 An aspiring filmmaker coming from a military family, my solitary life allowed me to gain an intimate knowledge of geekdom. I specialize on horror and military, but I am also knowledgeable on science fiction, fantasy, comic books and classic cartoons.
You might also like
BatfleckBatmanbatman vs superman