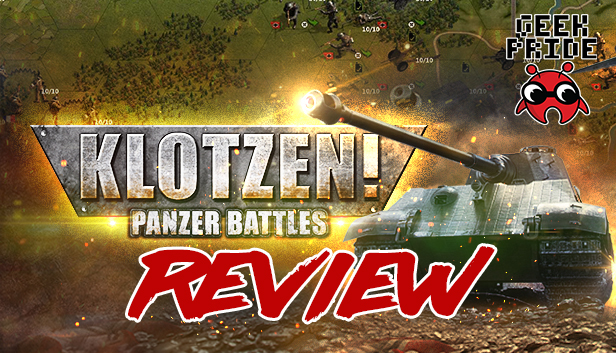 Klotzen Panzer Battles is a new game by Maxim Games and will be something very familiar to you oldies out there who are used to play Panzer General or newer hands who played Panzer Corp.

In short, it’s a WW2 Hex and turn-based strategy game that puts you in control of large armies in Spain, France, Africa, Russia and the defense of the fatherland, with the added bonus of some very interesting counterfactual battles, like Spain entering the war and the invasion of Britain.

There are multiple campaigns to play through and each has its own matrix flow chart that moves you to a certain scenario, or if you are unlucky, the end of the game depending on the victory type or loss, giving you consequences to your actions and making you think a lot harder about your moves.

A tactical challenge added to by the fact that there are supply lines for your troops that can be bombed and cut off, similar to Unity of Command and a nice touch adding to the challenge.
I also like the fact that multiple aircraft can be landed on an airfield at once instead of stacking them around the perimeter; albeit management of this can be somewhat frustrating at times.
The unit roster seems to be very extensive, with nice if somewhat cartoonish renders and generally it has that nostalgic feel of those old-school hex-based war games we all know and love.

This is not to say it isn’t without its issues though..

First up I’m not sure I like the aesthetic of the menu screens, the font seems off and as much as the save game (for losers) is amusing it’s strange cause you kinda need to save games like this, especially while playing a campaign and especially as the game has crashed on me a couple of times.

On top of this, the game blurb says it’s meant to be intuitive but it took a while for me to find things and to be honest I think if you were new to games like this you’d struggle, especially as there isn’t really a tutorial, bar one screen of text that you can’t seem to go back to after you click off it.

There is allegedly a manual coming out but why that wasn’t added in the first place is somewhat odd, especially as there are a lot of things to get your head around in this game. From buying and renting units, supply, command, damage and entrenchment. For someone who hasn’t played a game like this I think you’d really struggle.. only reason I had an idea on what was happening is because I grew up playing similar games.

The goodie two shoes in me means that I quite like to play the allies but instead of having a native option visible in the main campaign screen you have to go to the modify rules on the side.. something that took me a while to figure out.

The developers should also know that there seems to be placeholder text for the tooltip on these scenario modifier options and in some scenarios, the Allies invasion of Spain being one, you can’t play as the allies; irrespective of you modifying the game or not.

Finally, generals and commanders.. I didn’t seem to get it and didn’t overly feel like they were anyway affecting battles. In some cases, I’d choose a general and for traits, it would just be black and say unknown.

Now it could be that I wasn’t doing it properly or I was missing something but if that’s the case, a better tutorial on it and well the aforementioned manual might have been useful. It should be noted though that there are some basic tutorials on their YouTube channel which I found after.

All in all it’s not bad game. Is it groundbreaking, not really, is it something different, no, but I guess in games like this you don’t need too much innovation. Maxim have tried to add a bit more depth with the supply aspect, damage types for ships and some other nice touches but I very much think they need to add a bit more polish to the game for it to justify its price.

Enjoyable enough, once you grasp it but a few wrinkles that need to be ironed out.

Want to win a Steam Key for Klotzen Panzer Battles?

Load more
Klotzen Panzer Battles - ReviewIn short, it’s a WW2 Hex and turn-based strategy game that puts you in control of large armies in Spain, France, Africa, Russia and the defence of the fatherland, with the added bonus of some very interesting counterfactual battles, like Spain entering the war and the invasion of Britain.