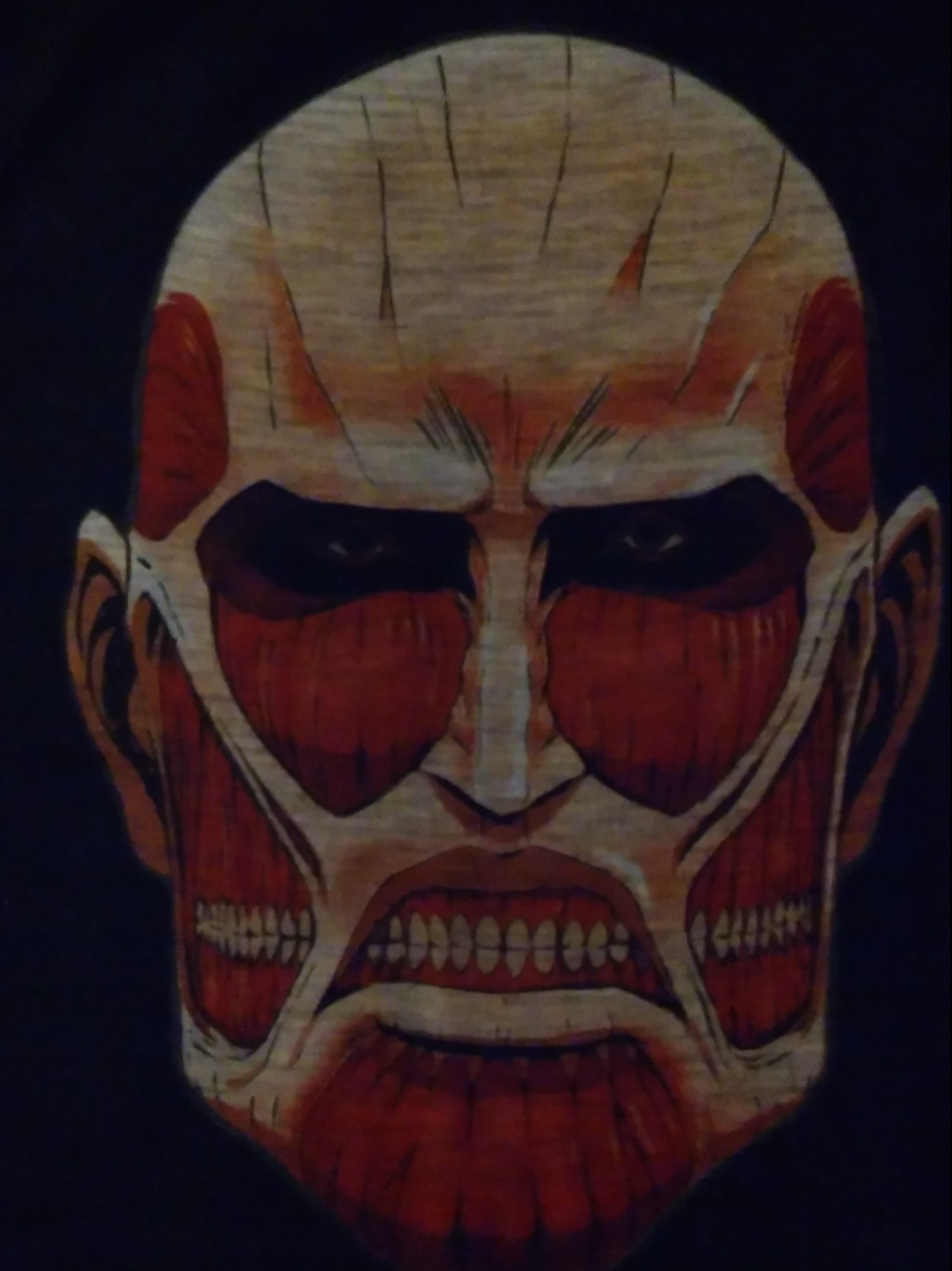 Alright, it’s that time again. Thus far, Nerd Block Classic has been my favourite monthly subscription service, and I have yet to be disappointed. Can they do it once more with the September box? Let’s take a look.

First off, let’s start with the shirt instead of ending with it, just for a change of pace. 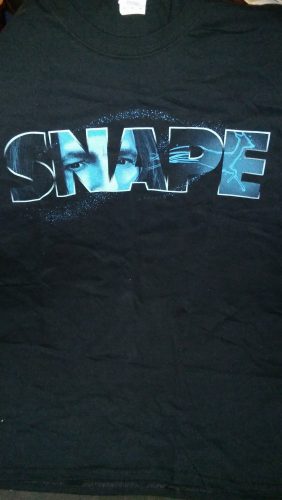 We’ve got a very nice Harry Potter shirt this month, representing the late, great Alan Rickman as Professor Snape. I am no fan of the series (books or movies), but I love Alan Rickman, so this is a win. This one automatically goes to my wife, however. She actually is a fan of the series, so I will hand it over with no need for UFC 2 this month (My wife won that contest, BTW. Sad face.).

Up next, we’ve got another book! Last month, it was from The Simpsons. This month… 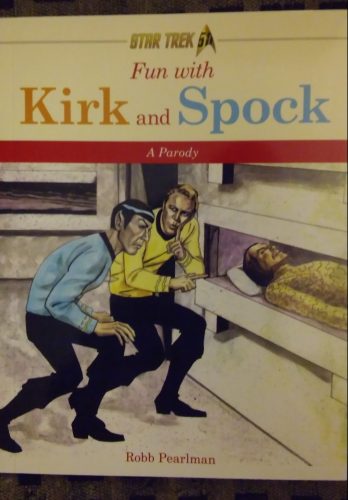 It’s the original Star Trek series. Well…sort of. As you can tell by the photo, this is a parody book, with the title based on the old Fun With Dick and Jane stories. Again, not a fan of the franchise (still met Walter Koenig!), but this should be a fun little read for a rainy day regardless. We’re 2 for 2. 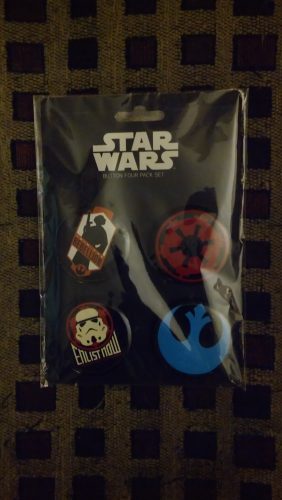 Not that I need more buttons (the collection is getting ridiculous), but hey, it’s Star Wars. I LOVE Star Wars, and I will never turn down anything from the franchise. Score! We are now 3 for 3, so this box is going swimmingly.

Last month, the insert card promised an Attack on Titan item, which is great by me. I’m a big fan, so let’s take a look at what we’ve got here. 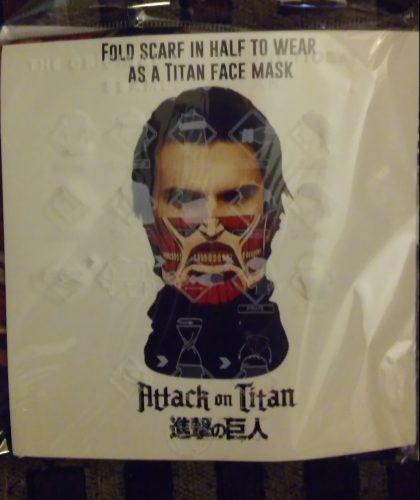 It’s a scarf/half-mask, designed to look like the Colossal Titan, something I have never received in any of the subscription services I’ve ever had, so it already gets some points for being something new. Let’s get a better look: 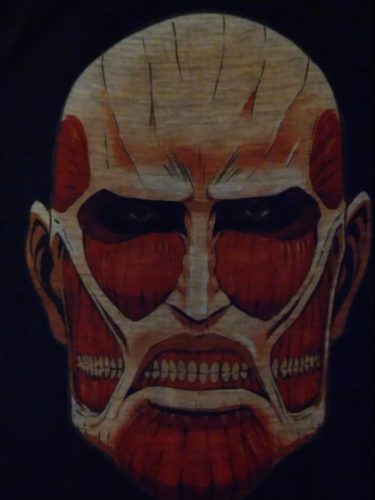 There is no mistaking that mug. It’s got the full face, so I suppose you could wear it as a full mask (although it’s open at both the top and bottom. In order to wear it correctly, you’re supposed to fold it over and wear it so just the mouth shows. Now, for your viewing disappointment, a rare photo of me on this site, wearing the item in question: 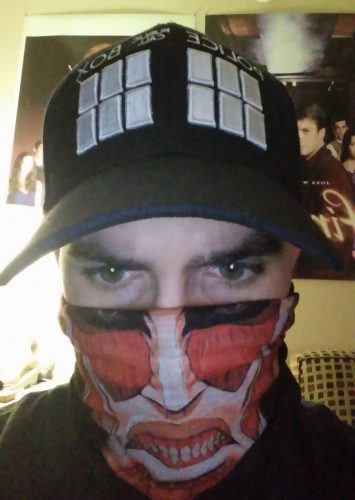 My folding job wasn’t the best, but it works. Too hot to wear it now, but come winter, this will definitely come in handy. For those that have never been here, it gets as cold as a witch’s teat, and my face often suffers the brunt of the low temperatures. So, not only is does it look cool, it’s functional.

The box has been nothing but winners this month, but we’ve got two more items left to go. First up is a phone case, again, the first I’ve ever received in one of these boxes. 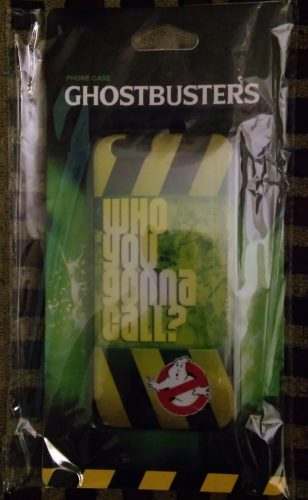 It’s from the original Ghostbusters, which is good for me. Unfortunately, it’s exclusively for the iPhone 6/6s, which I don’t have. However, my wife does, so it can go to use. Although she has an awesome UK phone case that I don’t think she’ll be parting with soon…This will probably be a backup. Still, it’s practical and at least one of us can use it.

And finally, there’s an action figure. And… 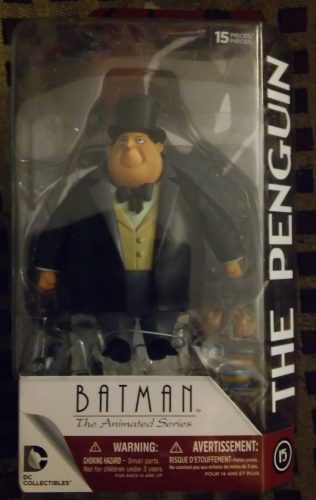 You have no idea how happy this makes me. For my money, Batman: The Animated Series/The Adventures of Batman & Robin is probably the finest animated show based on a comic book ever made. The animation, the stories, the voice-acting…it was just perfect. And to finally have one of these figures, which I have wanted since they were announced, just completely made my day today. Even if everything else in the box sucked, this one item would have made it all worth it anyway.

Well, Nerd Block does it once again. Every item hit in one capacity or another, and that action figure is just outstanding. Keeping this subscription was a smart choice, and I am already looking forward to next month.

Be back here in a few weeks, when I’ll be looking at items from The Walking Dead (blech), Beetlejuice, Alien and more.