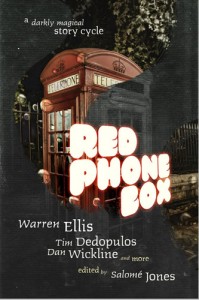 Amber, plagued by thoughts of a man who abandoned her; Gloria, who wanted to get back at her father; Jon, who has died and now lives again; Safran, the plaything of powerful forces; and Cory, on a desperate search for friends.

The one thing they have in common is a red phone box in the heart of London.

Andy Haigh started writing to counteract the brain atrophying effects of Retail Hell, now it's an addiction. Andy is an unrepentant sequential art absorbist and comics are one of his passions. Other interests include Film, Music, Science Fiction and Horror novels and quality TV like Game of Thrones. He can talk about these at great length if only someone would listen. He lives a somewhat hermit like life in The Shire, spends too much time on social media and is still waiting to go on an adventure.
You might also like
breaking spotlightGhostwoods Bookskickstarter