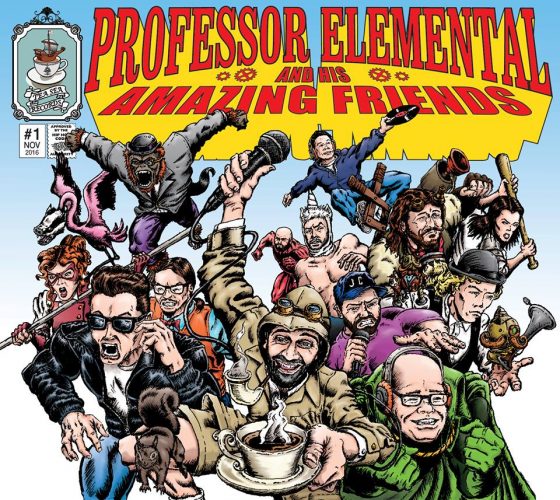 I am a big fan of Professor Elemental, aka “The Gentleman Rhymer”, and have been ever since discovering him by accident while reading an article on Cracked.com. I love his style, which is a blend of hip-hop and humour, with a healthy dose of steampunk thrown in. It’s a very underappreciated genre, and one that he shines quite brightly in thanks to smart lyrics, good beats and more nerd/geek references than you can shake a Sonic Screwdriver at.

Over the last year (give or take), I’ve gotten to talk to Paul, the man behind the rhymes, via social networking, and as luck would have it, I happened to be online at the right time, as he offered me a review copy of his brand-new album, Professor Elemental And His Amazing Friends, a record that is heavy on the Elemental but, as you would expect from the title, is a collaborative effort with Elemental’s close friends, including representatives from the Gentleman’s Club and Special School. I jumped at the chance to review the new tracks. Overall, it’s a very enjoyable audio experience.

Now, I have never reviewed an album on Geek Pride before, so I decided to go through it track-by-track and give you readers thoughts on each one. Alright, here we go.

1. “Intro”-A very short track, but it does exactly what it needs to and introduces listeners to the album and tells them what they’re in for. Even with being so short (33 seconds), it’s got a good beat and is a fun track.

2. “More of What You Asked For”-The first real song on the album. A blend of steampunk charm and Elemental’s aggressive-but-friendly rap styles set to a faster beat than most any of his other songs. A good, high energy track.

3. “Bare Witness”-Easily the best track on the entire album. The song stands out thanks to being set over the beat of “Super Bon-Bon” by Soul Coughing and a bit more aggression on the lyrics. Catchy lyrics and beats, and I especially appreciate the shots taken at Ed Sheeran and Kanye West.

4. “All You Can Eat”-A short song set to an upbeat piano number. Some catchy lyrics, where the Professor talks about things he likes/wants. Nothing special, but a fun song.

5. “Cotton Club (interlude)”-More of a sketch than a song, something regularly featured in the Professor’s library. I’m not a big fan of the sketches, but I know a lot of his fanbase are, and you gotta try to appeal to everyone.

6. “BeeGees Ain’t Got Nothin’ On Me”-A fun disco/hip-hop hybrid track with some funny lyrics and a great beat. You might find yourself singing the chorus in short order.

7. “All in Together feat. Nick Maxwell (GnT Remix)”-I’m a little torn on this song. Remixes can be hit-or-miss, and this one is something of a miss for me. It’s not that it’s a bad song; it’s that the original is one of my favourite songs in the Professor’s entire library and one of my current favourite songs overall, and I honestly think it’s perfect the way it is. The lyrics are still in-tact here, but the beat seems to fast to me. It just doesn’t fit the song as well as the original.

8. “Mechtoria”-Heavy on the steampunk for this track, where the Professor talks about the fictional titular world. I like the lyrics, but much like the previous track, the beat is just a tad too fast for my taste.

9. “Inn At The End Of Time (remix)”-While the first remix on the album was not my cuppa brown joy, I really dig this one. The beat is great with some outstanding lyrics. Basically a love letter to time travel, the song features just about every time travel pop culture reference you could think of, including Back to the Future, Doctor Who and Time Bandits, to name a few. Probably my second-favourite track on the album.

10. “101 Questions”-The Professor asks the tough questions we all want answers to over a hip-hop backdrop. Simple as that. Great track.

11. “I Had A Hat”-More of a sketch than a song, where the Professor asks various people if they’ve seen his hat.

12. “Put Up Your Dukes”-Heavy on the steampunk for this track, where the Professor talks about all the people in his fictional world who want to challenge him to a fight. A light, enjoyable tune with a good melody and some funny lyrics. Any time the Professor makes songs about fighting, you’re in for a good time (See: “Fighting Trousers”).

14. “Laughing Gas (skit)”-A sketch featuring dialogue from an old movie or TV show (I’m not sure which, as I’m unfamiliar with the dialogue). I’ll have to ask him sometime where some of these clips come from.

15. “The Wages of Gin”-A bit of a slower hip-hop song than others on the record (or other records in his catalog, for that matter), but a decent track about the Professor’s crazy experiences when imbibing in a spirit or two.

16. “Theme Music (Extended version)”-Pretty much exactly what it sounds like. It’s the Professor’s own idea of a theme song for his character as if it were a superhero, and sounds just as appropriate. An enjoyable track. Recommended for comic book fans.

17. “Outro”-a brief song featuring the same beat as “Intro” to close out the album. No lyrics this time around, though.

Overall, a fun album to say the least. Enjoyable, entertaining lyrics set over great beats, with at least two superb tracks in there. I didn’t enjoy everything featured, but that’s okay. What I did enjoy, I enjoyed immensely, and what I didn’t, I’m sure appeal to other fans of the genre. There’s a lot of variety on this, and definitely something for everyone who is a fan.

I would personally like to thank Paul Alborough, aka Professor Elemental, for giving me the opportunity to check out the new album, as well as giving me the opportunity to interview him for a future article. If you’d like to learn more about his music, hobbies and all things Elemental, visit his official website, his official Facbook fanpage, or follow him on Twitter (@prof_elemental).

I am straight edge and a freelance writer currently working for several sites. I also do personal training. Currently, you can see my weekly WWE Smackdown recaps on CamelClutchBlog.com, video game reviews on BurningAngel.com (warning: although I only write game reviews there, it is an adult entertainment site) and mostly wrestling-related stuff on Man Cave Daily (mancave.cbslocal.com).
You might also like
Back to the futureDoctor Whohip hop