previous
Second Day of the Doctor trailer!
random
next
Doctor Who - Hitting you right in the feels

Whilst he’s not officially confirmed it himself, it’s widely expected that Thor: The Dark World director Alan Taylor will be signing on the dotted line to direct 2015’s Terminator 5. It’s unlikely to be called Terminator 5, but the new movie will be the latest reboot in a franchise that people have spent an awful lot of money on the rights for. 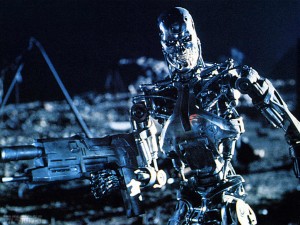 The first casting rumours for the new film have now begun to surface, specifically for the roles of John and Sarah Connor in the new movie.

In the reported running for Sarah Connor? That’d be Margot Robbie (The Wolf Of Wall Street), Brie Larson (21 Jump Street) and Emilia Clarke (Game Of Thrones). As for the role of John? Two names being put forward are Boyd Holbrook (The Host) and Garrett Hedlund (TRON: Legacy).

By the age of the actors being linked, we can presume that we’re going to get relatively young versions of John and Sarah.

Arnold Schwarzenegger is also set to return in the new movie, which is believed to be the starting point for a new trilogy of Terminator films. Mind you, they said that with Terminator: Salvation, and that didn’t quite go to plan.

How do you feel about a new Terminator movie? Are you getting all sweaty under the collar at the potential return of Arnie in the iconic role? Or after Salvation do you think the franchise should be retired? Be sure to let us know in the comments…

Richie Janukowicz has been a cameraman, knight, web developer, farmer, graphic designer, telesales agent, carpenter, gardener and chef, though not necessarily in that order. He has been forced by Officers of Her Majesty to sign the Official Secrets Act. Twice. He possesses a deep and unwavering love for playing acoustic guitar, dissecting movies, reading fantasy and science fiction, superheroes (both real and imagined), martial arts and bacon. Right now he's trying to juggle a blossoming writing career with being a full time dad. He enjoys the challenge, but would like some more sleep.
You might also like
Arnold SchwarzeneggerbreakingBrie Larson