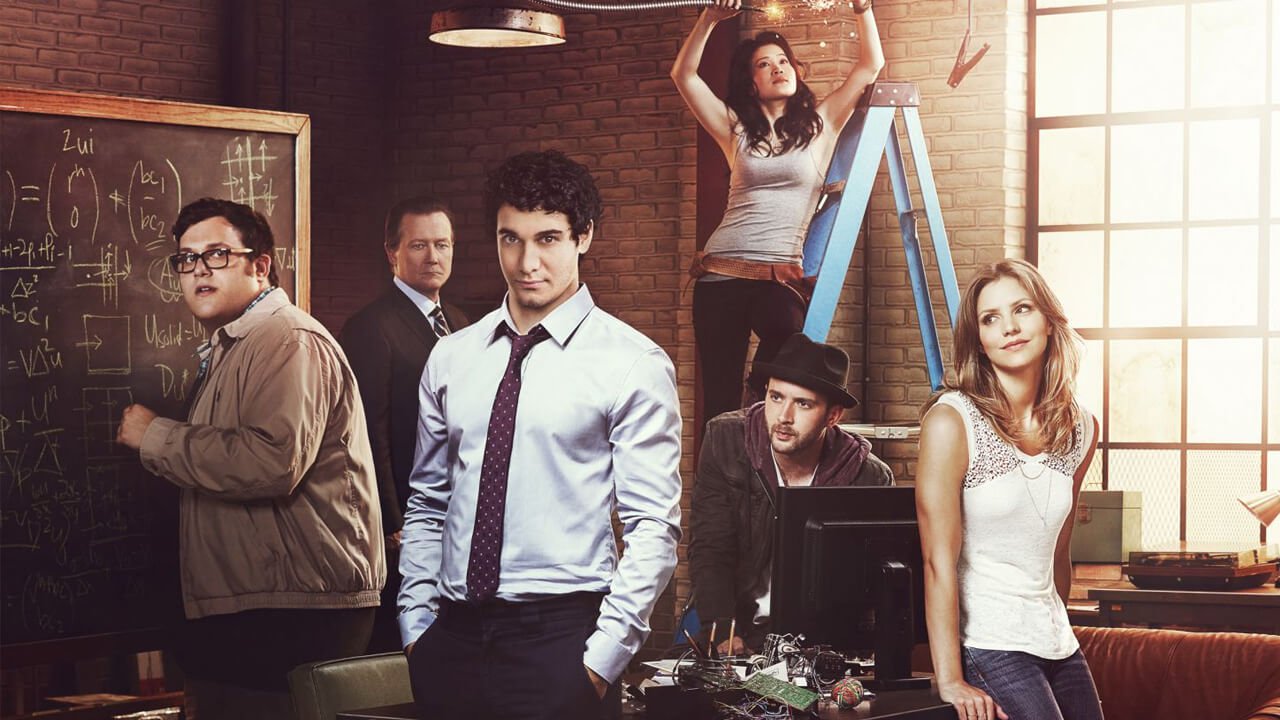 It is fair to say I like most have spent a lot of time consuming media during the lockdown. Of course, I started with the new, then the old faves, followed by older tv shows I’d vaguely heard of over the years.  I’ve watched some bad TV as a result; boredom lowers your standards considerably.

So why did 2014’s Scorpion stand out to me? It’s certainly not quality of writing, acting, or even entertainment value.  This show was deeply weird, even to me.

For those that don’t know, the premise of the show is a fairly common trope. One genius man with other kinda geniuses works with the government to solve crime.

Elyes Gabel is Walter O’Brien; hero of the show, and a genius smarter than Einstein! This man can do it all: hack, math, drive race cars, parachuting, spying, fighting, gambling. He is dropped into active warzones, despite being s just the nerd! His only flaw is that he has no emotions and is an asshole. No one ever calls him on being an asshole.

Katharine McPhee is Paige Dineen, the main love interest and the normal character that the audience are meant to relate to. Paige was hired on the team because she understands how to handle genius, despite having a genius son that she doesn’t understand. Like the rest of the team, Paige goes on missions that her waitress background in no way gives her background or experience. Her role is to be the love interest and to say to Walter “let’s calm down” now and then. Characters often ask what the point of her is. After one season I also wonder.

Eddie Kaye Thomas is Tobias “Toby” Merriweather Curtis, M.D.  The show doesn’t seem to know if this guy is a behaviorist specailist or an actual medical doctor. Whenever there is an injury my dude is in there ready to use his doctorate in psychiatry to perform surgery. He’s also incredibly inappropriate, makes smart remarks, has a fedora, a gambling problem and a problematic obsession for the hard-ass woman of the team. Sexual harassment is fine because he’s FUN. (except he’s not). Somehow Tobia is meant to be brilliant at people yet unable to handle people. 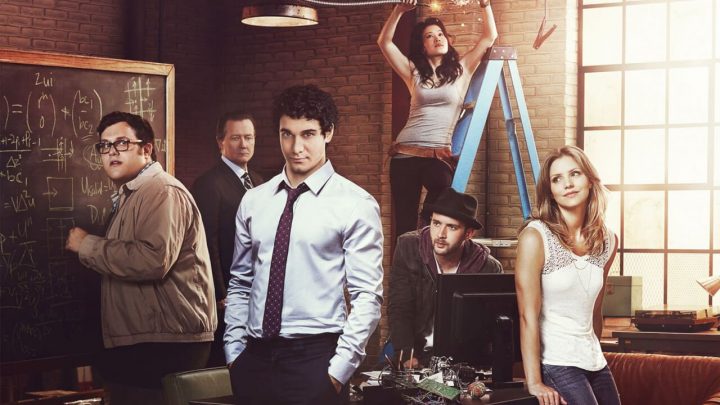 Jadyn Wong as Happy Quinn; the machine smart one that also hacks.  Also, punches people, climb’s walls.  Happy is the action hero because daddy abandoned her and made her angry. Apparently, Happy has got a good ass. How do we know? It’s mentioned by Toby every episode. Happy actually doesn’t seem to have problems communicating with people – she is s just a token badass woman that is so angry and too busy punching things to bother. Excuse me while I go punch a motorcycle into working…

Ari Stidham is Sylvester Dodd; the maths one. Sylvester is the “typical” nerd who loves comics, is overweight, has anxiety, is a germaphobe and is awkward with women. He wears glasses and a sweater vest, so it’s very subtle. He hacks, is a grandmaster of chess and  has a photographic memory that means they use him as a human scanner. Again, he goes on ACTION MISSIONS and screams the whole time. Have I mentioned he’s anxious? Don’t worry he will.

Robert Patrick is Agent Cabe Gallo’ the government agent man and stand in “father figure”. Cabe has a past and works for Homeland Security, which means he has endless funds, access, and resources. Despite being the only one with any training whatsoever, Cabe is sidelined because he “looks too much like a fed”. Cabe’s child has died and his wife has left him. He also likes to says things like “hang on to your lunch”. Somehow he has less personality than when Robert Patrick played a literal terminator….

Riley B. Smith is Ralph Dineen; Paige’s child genius, who reads more on the spectrum than anything else. Ralph Does stuff that would cause any reasonable mother to declare “This environment is bad for my kid I’m out”. Also does action-hero things and is 10. 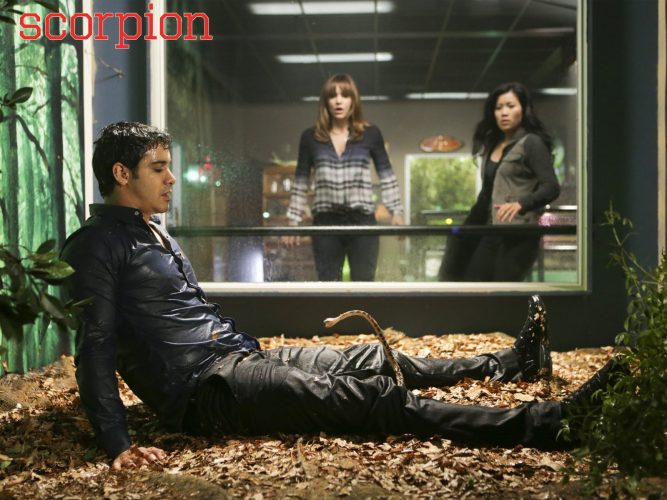 What frustrates me about this show is why Walter so Mary Sue. Any time people place reasonable boundaries with him, the story takes pains to show him as being in the right. His asshole tendencies are never addressed or have consequences.

Walter has this stunning woman interested in him, even though he insults her every episode. He treats his team like shit and they are “Walter is the best thing in my life. He’s the greatest. Sempai, notice me uwu.”

Even some of his so-called brilliant moves are stupid? For example, a boy about to be drowned, he sets up an oxygen blood device and tells the kids to just drown and not try and breath with giants needles in his arms. Have you not heard of scuba diving? The weird focus on his IQ, which anyone with a basic knowledge of IQ would know is not accurate, and how Genius people are like, inhuman?

This is combined with the opening words of Scorpion, where it declares “Inspired by the life of Walter O’Brien”, which made me hit the internet.

This is where it gets really weird… 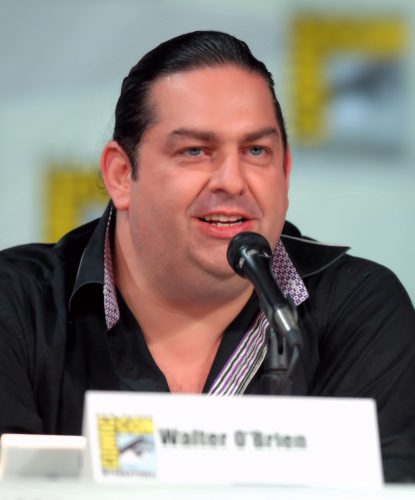 Walter O’Brien is a real person. He’s claimed to have an IQ of 197, although there’s no proof and won’t take tests to prove it. Walter claims to have hacked the NSA, but can’t give proof due to an NDA, but no one else can find any proof of this. Also claims to have helped catch the Boston Marathon Bombers, but that pesky NDA stops him from giving details.  Do we see a trend developing here?

This show is a literal advertisement for his company Scorpion Computer Services, Inc. and its service Concierge Up. O’Brien produces, helps write it and comes up with the “technical aspects”.

However, O’Brien’s contributions to the technical aspects of the plot led to the National Science Teachers Association advising teachers to use this show as an example of incorrect or exaggerated science.

Scorpion is essentially a 4-season advertisement for a private company and moonlights as one man’s fantasy about himself, which is seemingly funded by CBS.

So, why have I sat through an entire season, researched the show and then spent two hours writing this?  ADHD…

In my mind, this series is part of a genre of shows that teaches geeks, nerds, or anyone who ever felt a bit different that they are too different. Rather than attempting to integrate with society, Scorpion advocates surround themselves with those who do not challenge them. It presents that being smart is a get out of jail free card for being a jerk.  That pursuing the girl, even when she says no, is fine.  That not making the effort to be a good person is fine.  Ultimately; none of these characters would be bearable in real life.

So, in order to save my sanity, I’m going to rewatch Elementary. This is a show that took the “smart genius man solves crimes” trope and made it human.