This past weekend, I attended my first Starfest convention (on behalf of Geek Pride), the 40th anniversary of the event. Mainly a Star Trek/Star Wars festival, over the years, it has grown to include guests, activities, etc. from all different sci-fi and horror franchises. This year, everything from Firefly to Doctor Who to Dark Matter got covered (as well as the aforementioned mainstays) in some way or another, so for three days, I took in the event and its many offerings.

The first day honestly didn’t offer me a whole lot. Unfortunately, there were some issues with the press passes. Myself and the other media reps were supposed to receive them by 1:00pm, but they weren’t available until around 2:30. Also, most of the guests were not at the event until later, vendors were still setting up or hadn’t arrived yet, and the dealer’s room (the main selling area) was not open until later in the evening. As a result, we did not stay very late or get a whole lot accomplished. I did, however, manage to at least get a few photos of some displays and some cosplayers. 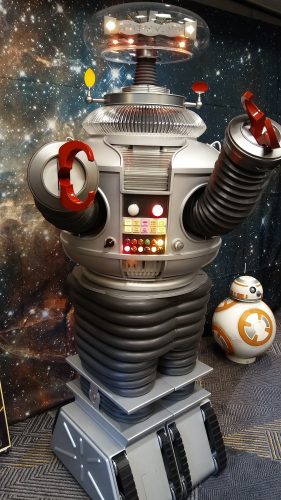 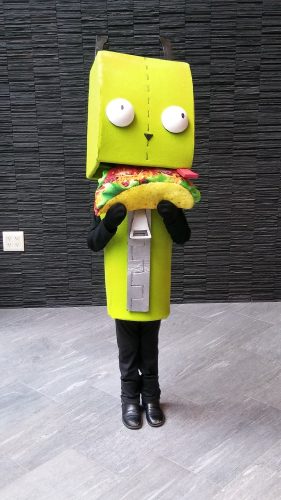 The second day was much more productive. It was easily the biggest day of the convention (typical for a Saturday during a convention weekend), so most everyone was set up and ready to go with everything. We started the day in the first part of a 4-part “SHIELD Academy” panel. Something of an interactive panel where the hosts teach you how to be a SHIELD agent, it really was more a history lesson in the franchise. It was pretty interesting, as a lot of stuff was covered that even I, an avid comic reader, didn’t know, so kudos to the hosts on their knowledge. The first three parts all took place on day 2, with the fourth on the third and final day. If you went to all four, you got a “graduation” certificate, as well as a gift for attending. I’m all about free gifts, especially ones at conventions, so we made it a plan to hit all four.

Of course, throughout the day, we also came across numerous cosplayers, more than willing to pose for photos. Eleven from Stranger Things was a popular costume this year (in fact, the whole franchise seemed to be popular with the cosplayers). So popular, in fact, my wife decided that will be her costume for Denver Comic-Con in a couple months. 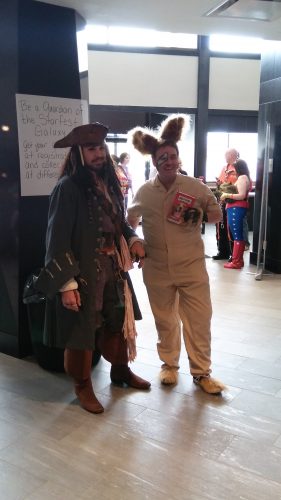 This particular Captain Jack Sparrow was especially committed to role, doing Johnny Depp’s voice and mannerisms in the Pirates movies over the course of the weekend. 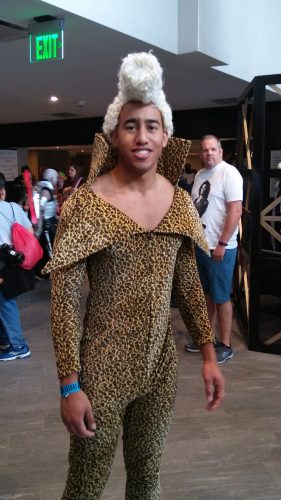 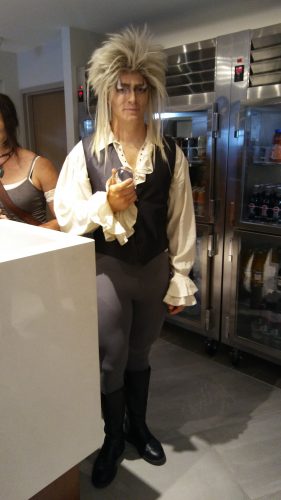 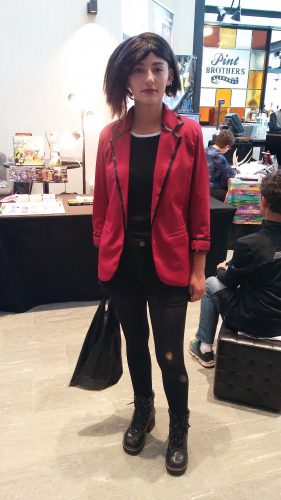 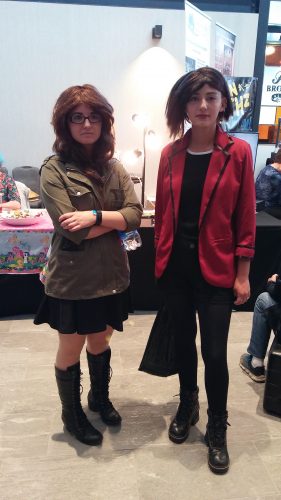 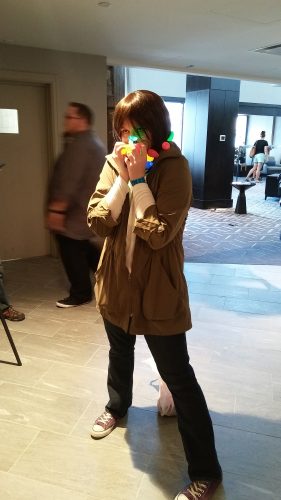 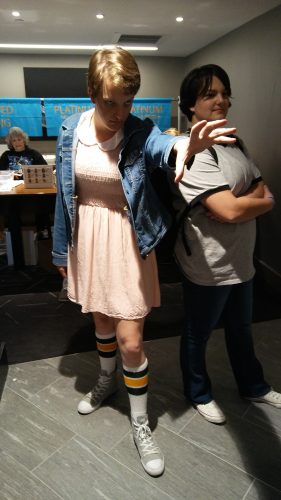 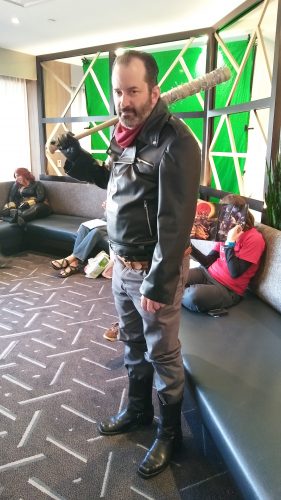 In between panels and cosplay photos, we checked out the vendor tables and whatnot. The main dealer’s room was fairly small (the entire event was held in a Marriott, so space for many things was limited), but had a great deal of wares available despite the limited size. There were also several auctions going on throughout the event, as well as an area for tabletop gaming and numerous movie/TV screenings, including many related to the guests on-hand.

There was also an entire area devoted to model-building and related hobbies, but we didn’t really get to experience that as there were additional costs involved. I did, however, take a couple photos of my two favourite models on display. 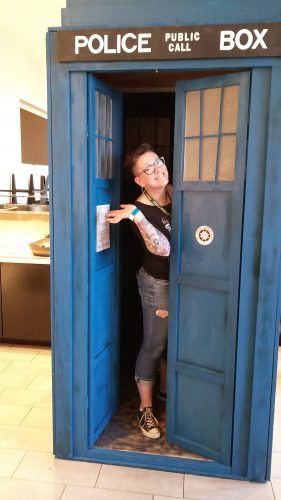 This particular TARDIS even had a had a panel that played all of the signature sounds. 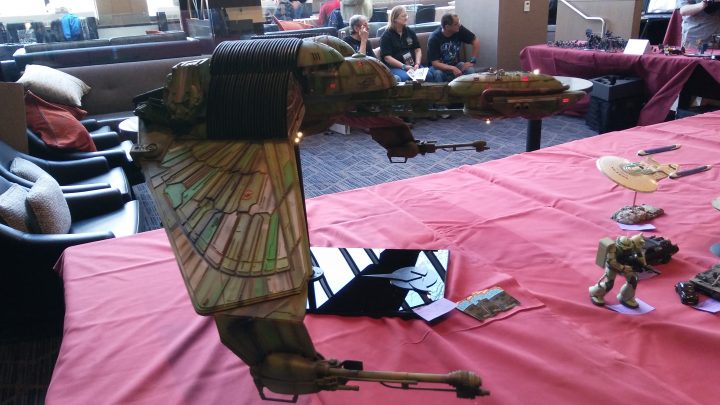 The celebrity guests were all in one main area, and nearly all made it for the day (more on that in a minute). Guests on hand were Cristian Kane (The Librarians), David Guintoli & Bitsie Tullock (Grimm), Walter Koenig (Star Trek), Rene Auberjonois (Star Trek: Deep Space Nine), Hale Appleman (The Magicians), Jodelle Ferland (Dark Matter) and Michael Quinn (Star Wars). Now, I didn’t have any plans to interview anyone (there were very specific equipment requirements, equipment I didn’t have), yet I received a text during the day that I was on a list to interview multiple guests. I still have no idea what happened there, nor did the nameless person sending me the text. Perhaps I was thrown onto a list by default, but I am unsure.

Anyway, Jodelle unfortunately missed her flight, so her appearances for the entire day were canceled, including a panel we were hoping to attend. Also, Ming-Na Wen, most famous for playing Melinda May on Agents of SHIELD, canceled only a couple days before the convention, as she was injured while filming her show and would require surgery. The convention, in a nice gesture, put together a “Get Well Soon” card they planned to mail to her after the event, available for anyone to sign. 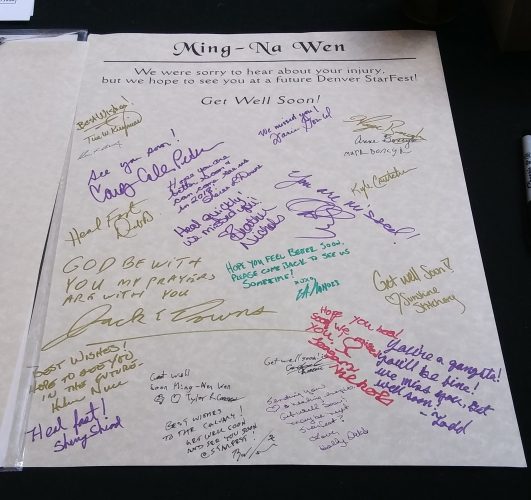 My signature is the sole green one.

In between all of this, we hit the different areas dedicated to horror and Doctor Who, as there were a lot of interactive things to do, especially for kids. And when you have a wee one like I do, that kind of stuff is important. There were games, colouring books, craft stuff and a bunch of other things to do that kept her happy and busy and gave us a chance to rest in between events, so it worked out pretty well.

Lastly, there was a silent auction going throughout the day, with all of the proceeds going to the Denver Dumb Friends League, a no-kill animal shelter in the area. I am a huge animal lover, and there was some good stuff up for grabs, so we made a few bids. We didn’t get everything we bid on, but we did walk away with an item I especially wanted, this IIMAX/Regal-exclusive Ghost in the Shell poster. 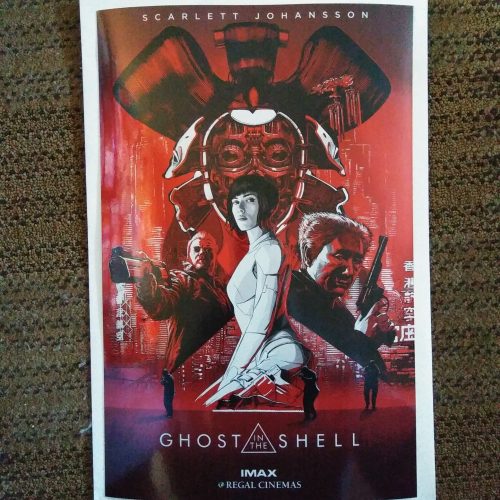 Screw the critics, I loved this movie.

On the final day, we decided to head in late, as there weren’t any panels or anything going on we were really interested in covering until around noon. First up was the “Gorram Browncoats!” panel, which wasn’t so much a panel as it was a bunch of Browncoats sitting around and talking all things Joss Whedon. We’re good friends with the panel hosts, and we only get to see them a few times a year, so for us, it was just a nice break from the rest of the convention and a way to catch up.

Immediately after that, Jodelle Ferland, who made it in for the last day, got her panel rescheduled, so we headed over to that. 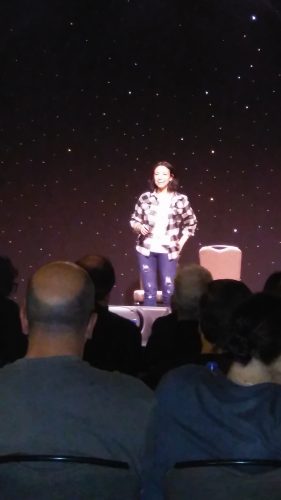 Jodelle kept the introductory part short in order to save more time for Q&A, which was nice. She was very candid and funny in her responses, and it turns out she’s just like the rest of us, a huge geek who refuses to grow up. She talked about her love of cosplay and sci-fi, especially Doctor Who, including a cute story about how she was having dinner in the same restaurant as Peter Capaldi during a convention weekend and immediately became flustered because she’s such a huge fan. She also talked about all the cosplay she wants to do for future events (she attends regularly when she’s not booked at them). She has an Instagram set up for her cosplay, and it turns out she’s pretty damn good at it. Check it out.

She then ended the panel with a tradition of signing the year’s display, something all of the guests do and something Starfest has apparently been doing for all 41 installments. Given her love of sci-fi and all things geek, I’d guess this was probably a pretty big honour. 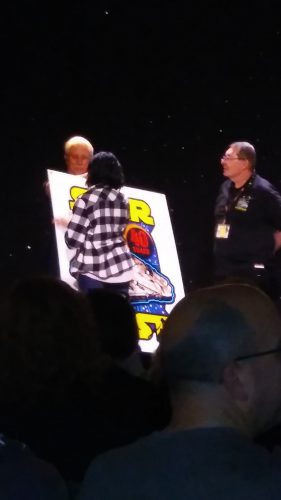 We hit another panel after that, dedicated to the paranormal and hosted by a group of pro investigators. My daughter has gotten into this kind of thing a lot lately, so she was pretty excited. That excitement died really quickly when it turned out the panel was basically a build to the investigators informing us they are being sued by a former employee and want people to bid on their auction to cover the cost of their legal fees. We ended up leaving before it was over.

With some time to kill before the final SHIELD Academy panel mentioned earlier, we made one last trek to the dealer’s area to see if there was anything we were dying to take home. We ended up with some excellent loose-leaf tea from Dryad Tea as well as some custom-designed tanktops. The missus picked out a Deadpool one, while I went home with a TARDIS. 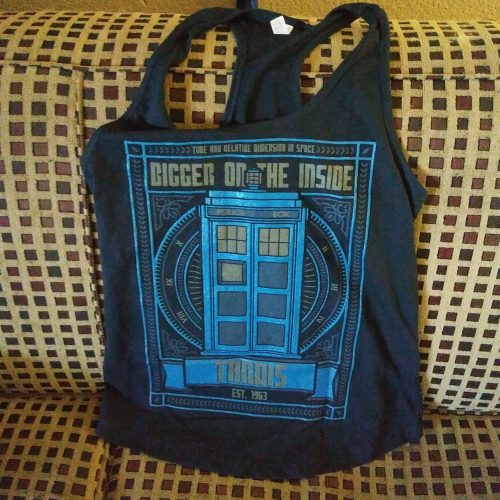 All of the celebrities were still around, as they had finished their scheduled autograph sessions and professional photo-ops for the day and were instead just hanging out at their tables, meeting with fans. 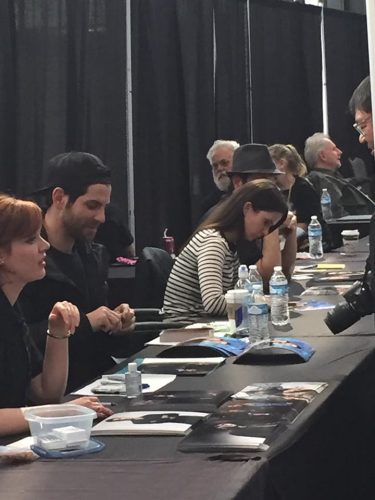 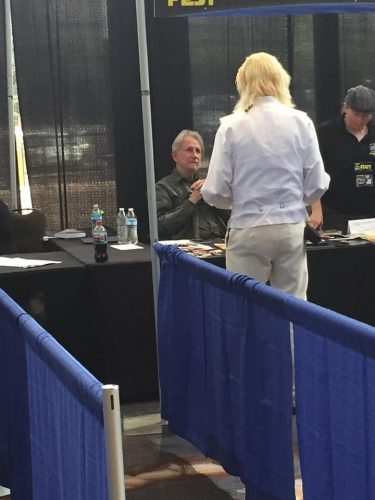 We headed to Jodelle’s table, and she is just beyond adorable. We spoke with her for a few minutes as she gushed over my TARDIS hat and my wife’s TARDIS backpack (the girl is a serious Whovian) before I asked how it felt to costar with Sean Bean in one of the few movies he doesn’t die in (Silent Hill). She was also nice enough to take a couple pics with us… 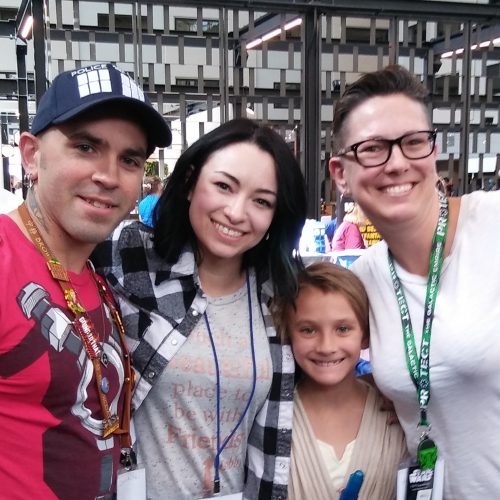 …but not before giving a shout-out to the site. Unfortunately, the file is too big for me to include here, but I will be posting it on the Geek Pride Facebook page.

We also met Bitsie Tullock of Grimm fame. I’m not a fan of the series, but my wife is, so we stopped by to say hello. Also another very sweet gal. Both she and Jodelle dug my daughter’s Rey costume.

Before the last bit of the day, we took in a viewing of the Buffy: The Vampire Slayer episode “Hush”, then sat in for the first part of Walter Koenig’s panel. We had one other panel to go to, so we didn’t get to stay for the entire thing, but what we did get to listen to was really entertaining. Walter talked about Star Trek and Star Wars, as well as a couple of unofficial Trek movies he did called Renegades: The Requiem, Parts 1 and 2, unofficial due to CBS owning the rights to the franchise and not wanting to be involved in the two movies. I have not seen them, but they apparently star him and most of the original cast reprising their roles, but with the names changed just enough to avoid infringement. I also learned that he, much like many of his form costars, has no love for William Shatner. 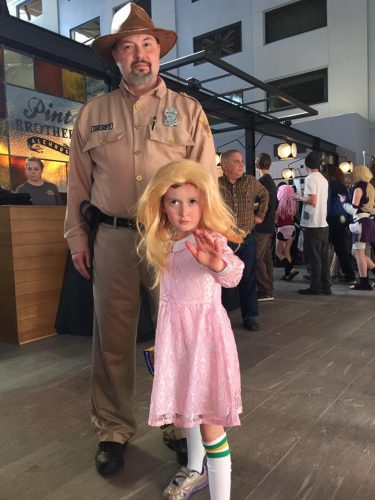 The cutest Eleven cosplay you will ever see.

To close things out, we hit the last SHIELD Academy panel and walked away with a Batman: Mystery of the Batwoman soundtrack as our gift, then snapped a couple more cosplay photos… 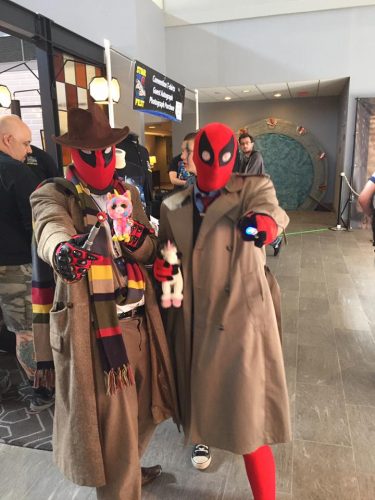 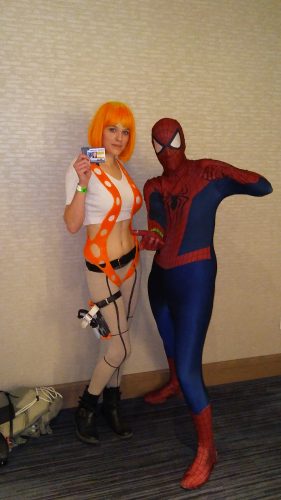 …As well as some pics of the custom vehicles parked by the entrance. 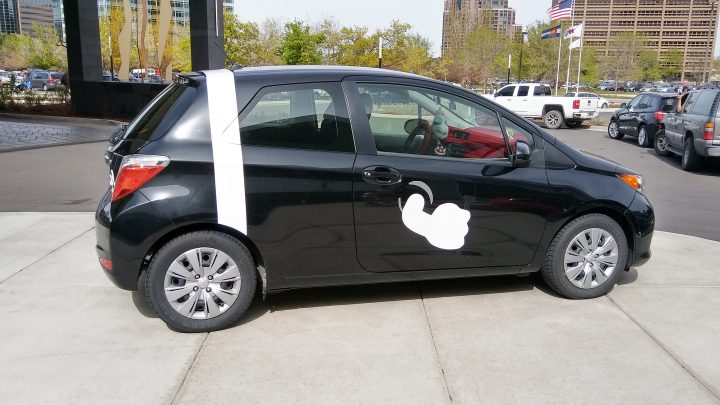 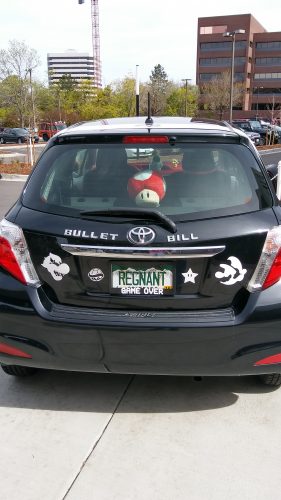 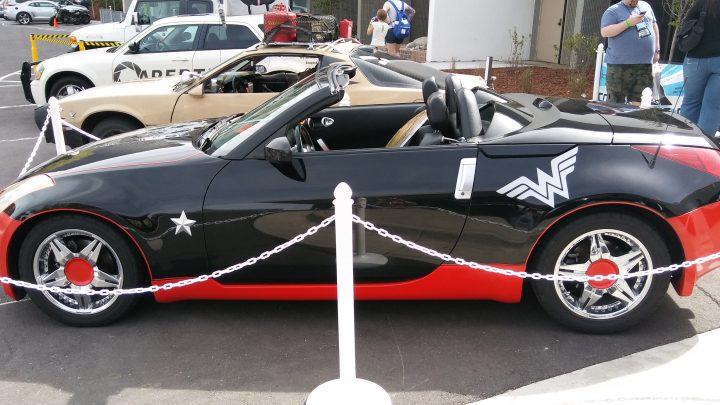 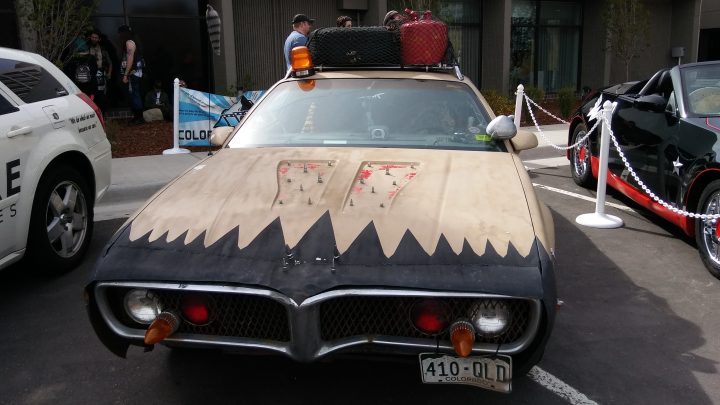 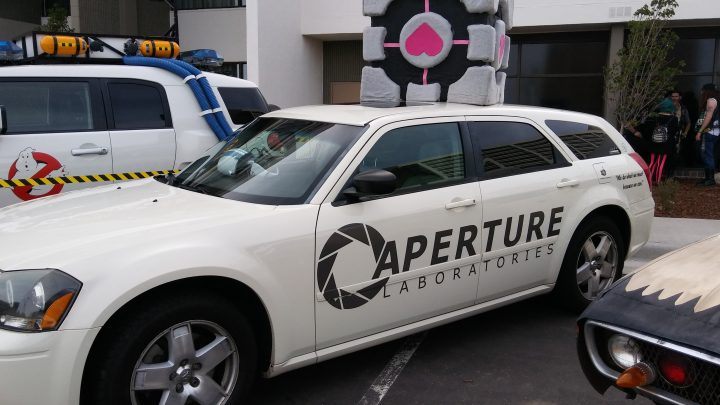 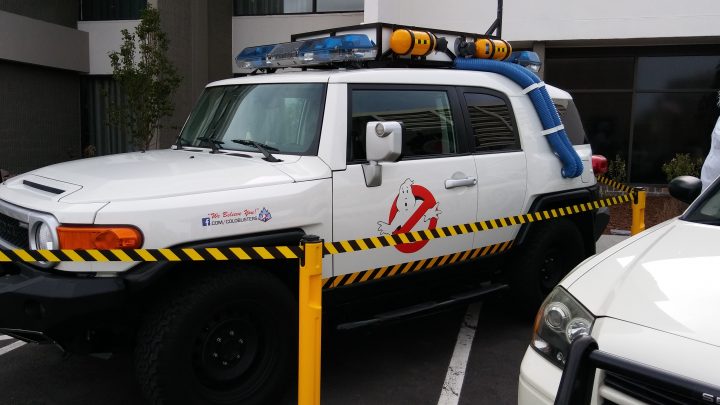 And that concludes the weekend.

This was my first time at Starfest, so I had no expectations going in. I’m happy to say that I had a good time. It’s a very fan-friendly convention with a lot of activity going on at all times. The layout is a little odd compared to what I’m used to, what with it being in a hotel and all, but still professionally run with a little something for everyone.

I’d like to thank everyone involved with putting Starfest on, and I hope you will allow Geek Pride to attend again next year. And a special thanks to Jodelle Ferland for making our first Starfest an especially memorable one.

I am straight edge and a freelance writer currently working for several sites. I also do personal training. Currently, you can see my weekly WWE Smackdown recaps on CamelClutchBlog.com, video game reviews on BurningAngel.com (warning: although I only write game reviews there, it is an adult entertainment site) and mostly wrestling-related stuff on Man Cave Daily (mancave.cbslocal.com).
You might also like
conventionscosplaydark matter