previous
Cheaty Mages
random
next
Camel Up
Tabletop
1 like

Version 5 of the fantasy tabletop game’s basic rules officially launched this month. Dungeons & Dragons (D&D), one of the cornerstones of modern RPGs and unspoken influence on geek culture and fiction, has, for the first time, explicitly embraced the questions of sexuality, biological sex and gender identity. While these themes have certainly never been banned from discussion by fans, the new elements now set up the opportunity for greater awareness an exploration of the issues through shared fiction. Thankfully, the rules themselves aren’t preachy and they do tie-in to the actual game in a very open-ended way. 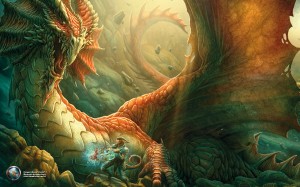 Scienticians have hypothesised that any number of dragons might be gay. Original source.

The pertinent part of the character creation section states: “Think about how your character does or does not conform to the broader culture’s expectations of sex, gender, and sexual behaviour. For example, a male drow cleric defies the traditional gender divisions of drow society, which could be a reason for your character to have to leave that society.

“You don’t need to be confined to binary notions of sex and gender – you could play as a female character who presents herself as a man, a man who feels trapped in a female body, or a bearded female dwarf who hates being mistaken for a male. Likewise, your character’s sexual orientation is for you to decide.”

“The elf god Corellon Latherian is often seen as androgynous or hermaphroditic… and some elves in the multiverse are made in Corellon’s image.”

I’m sure there’ll be those complaining that either this reminds them that alternate sexualities and genders exist, and there’ll be those complaining that having hermaphrodites in a fantasy setting is oppression against intersex people in real life. My opinion will be that it’s actually a good step for a major creative brand to take. Fair play to them.

I was born very early in my life and now live on a diet of scorn and sarcasm. Follow me @ryezuul
More Goodness
D&Ddragonsdungeons