Over the years there have been many successful campaigns on Kickstarter supporting card games. Just recently The Oatmeal successfully funded their popular game “Exploding Kittens” which was able to reach $8,782,571 before ending. At the time that was record breaking but other projects have since moved on to raise even more!

Explosm have taken to the stage revealing their new game, Joking Hazard. The game has already smashed its target of $10,000 and 7 days later has raised a massive $939,600 (at the time of writing) with over 20,000 backers.

The team have already shot through two sets of stretch goals and have scrambled to put together more with their “water land” goals. Such goals are completed by drawing 20 C&H snowmen and making a Cyanide & Happiness (C&H) themed video game mod! 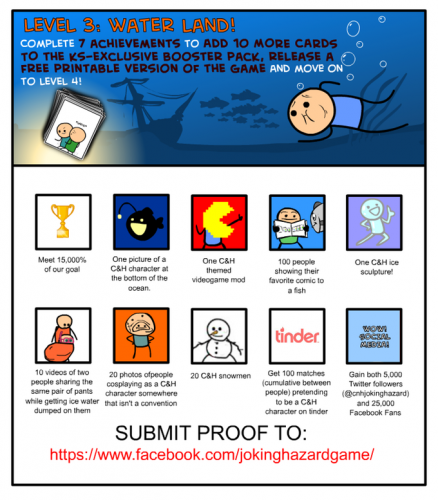 Round three of the stretch goals

The game its self draws a lot of its inspiration from the wildly popular game Cards against humanity (CAH). With big shoes to fill, one would hope that this new game will be a great compliment to an already fun game. Whether or not it can fill those shoes… well we will have to see.

Half the fun with CAH is using your imagination with answers and dreaming your own version of events so it will be interesting to see if a similar game that fills in those gaps with comic strip style panels can hold its own.

I for one am eager to receive my copy.

A true gamer at heart. It's my passion and will talk about it for days without taking a breath. Won't you join me?
More Goodness
Card GameCyanide and Happinessfeatures