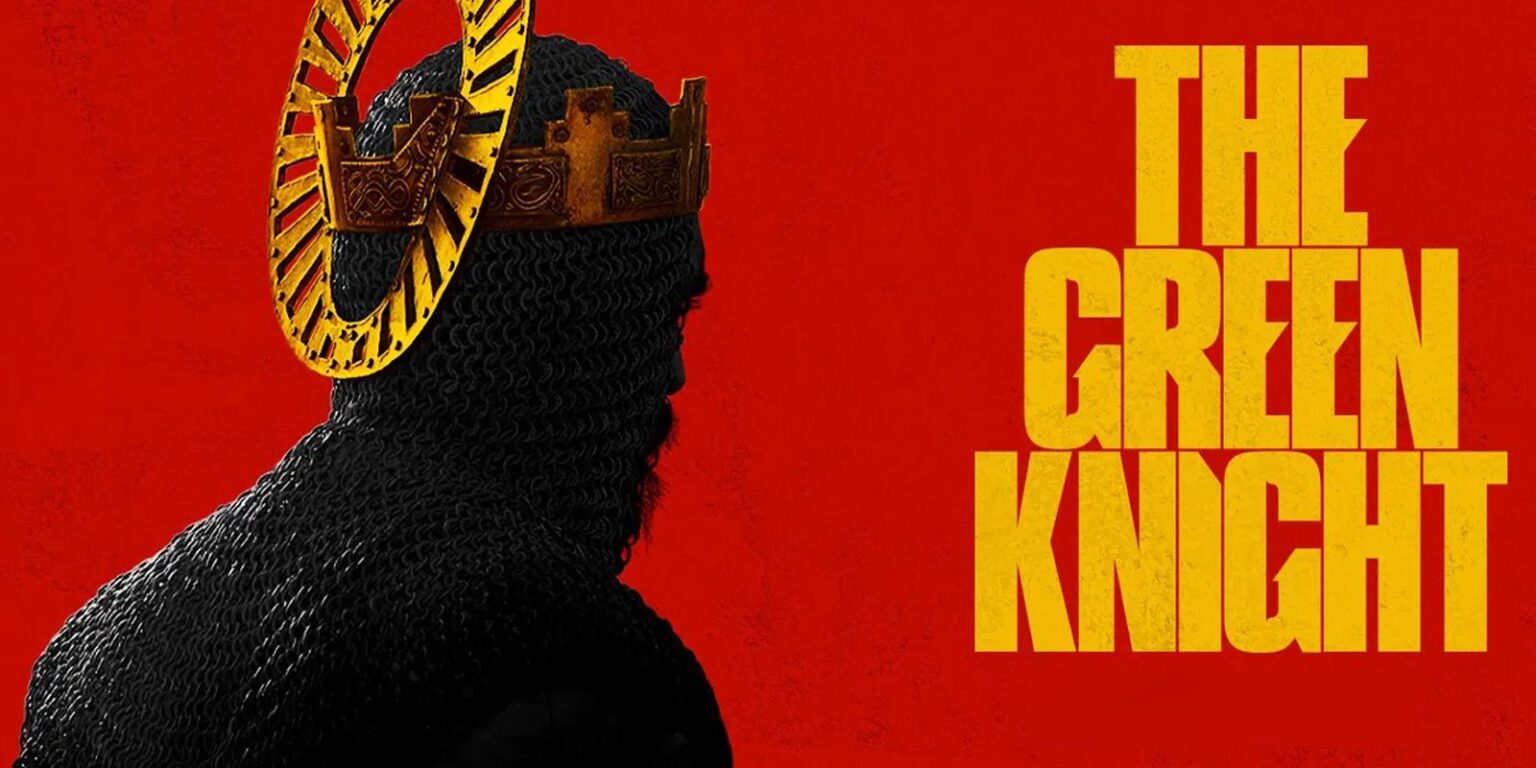 The Green Knight (or, as the film sets out, Sir Gawain and the Green Knight) is based on the 14th Century poem of the same name and was announced back in 2018 to much anticipation. The COVID-19 pandemic has not been kind to the release of many films, and Lowery’s adaptation was no exception. Following the cancelled premier at the 2020 festival ‘South by Southwest’, Lowerie used the time to re-edit and rework the film before its new release date in 2021. What we have received is a visually stunning epic that leads us down a familiar narrative for those versed in Arthurian legends, with some new twists and turns along the way.

The characters are undeniably identifiable, but Lowery makes the unique decision to anonymise some of the primary characters by referring to King Artur as ‘King’, and Guinevere as ‘Queen’ – even Gawain’s ‘Mother’ is left nameless, despite clearly responsible for  summoning The Green Knight, which indicates her characterisation as Morgan Le Fay. This is just one example of the changes made to the main text, as Lowery clearly plays with the source material to provide a rich tapestry for viewers to observe.

What’s notable about Gawain from legends is that his characterisation has been inconsistent.  In early texts, Gawain was a quintessential knight, courteous, devoutly religious and loyal to the crown and family. As later compilations of legends emerged, such as Thomas Malory’ 1485 compilation of ‘Le Morte d’Arthur’, his character became more associated with secular knighthood and is ultimately characterised as an antagonist to Lancelot (who had been the focus of much French Prose additions to the Arthurian mythos).

Immediately, the adaptation opts for a portrayal much closer to his character in 15th Century French prose.  We open up to a hungover Dev Patel sprawled out on a bed that belongs to Essel, a commoner from a nearby brothel, who proceeds to get some overtime in before he sets out to head back to Camelot for a Christmas Day feast.  This feast takes place around the iconic round table, at which are seated knights who are seen by Gawain as “legends”. This is central to the story of Gawain in this movie – he is welcomed up to join his uncle, who is adorned in an ornate armour that is decorated with metalwork forged into tiles detailing epic tales and adventures of his own. It is in stark contrast to Gawain’s own admission, when asked to recall the King with a story that he has no story to share, and it is something you can almost feel the shame sweep over you – with no children of their own, once the strength finally leaves the King, he will have to leave his responsibilities and legacy to rest on the shoulders of his nephew. A nephew inexprienced in war, in politics, in the principles of a knight – a boy with no story of his own.

No story ‘yet’, as he is reminded by Guinevere.

Outside of the festivities, Gawain’s mother (who welcomed her son home, and mentioned she had to stay away), is seen participating in witchcraft. Through her workings, the titular Green Knight is summoned. He is a monument to the supernatural, and bears it well as he towers over the festivities clad in naught but wizened bark that clings to him like armour. He has come to play a game with worthy men. A game in which a worthy knight may lay a blow upon him, but must venture forth in a year to the Green Chapel to receive an equal blow. Taking his chance to test his worthiness for glory, Gawain takes up the challenge with bravado, and so begins his legend. You cannot discuss this film without discussing the casting – each actor brings a phenomenal amount of work to the screen, and Dev Patel makes for a fantastic Gawain. It completely subverts the notion that a quintessentially British mythology should be performed by a white Western European actor.  This is not the first time Dev Patel has subverted an expectation of a role, having taken on the role of David Copperfield in Armando Ianucci’s film ‘The Personal History of David Copperfield’ early last year. As Gawain, he leads us through a series of odd encounters that help to characterise and set this representation of the character apart from what audiences might expect from a chivalric knight. Lowery’s Gawain is a flawed individual, who battles with himself in these encounters that personify aspects of Knightly Virtues; friendship, generosity, chastity, courtesy and piety.

As you’re swept gently along by the haunting soundtrack through these almost alien encounters, you might realise just how slow moving the plot actually is – there is a restraint on the pacing, allowing Patel’s Gawain to move gracefully from one chapter to the next (which Lowery punctuates with title cards) without feeling too ushered or impatient. However there are some who might be unaccustomed to such slow paced movement, given the fast and action-packed nature of most modern movies. I find that the movie comes across like a leisurely read, as you slowly work your way through some fantastic imagery like a wind working through an ancient forest – the film is littered with ethereal imagery that captivates the audience, from Arthur’s court all the way to the dilapidated Green Chapel itself. There is clearly a lot of love for the source material coming through, as Lowery has a history with it dating back to his freshman year of college. He knows that there are aspects of the film which he could enrich with thematic subtexts, allusions which were unintentional, and many different accounts of the tale which twist the narrative in subtle but definitive ways. In a foreward to The Green Knight, he writes that “I arrive now at the end of this journey with a finished film that I’ll happily admit cannot do justice to the well from which it’s drawn. This may be a poem that resists adaptation” – but I can honestly say that ultimately what Lowery achieves is mesmerizing, and an absolutely enthralling adaptation which had me questioning how exactly to find the right words.

It should be noted that whilst The Green Knight was released in the US on the 20th of July.  The UK release has been cancelled and, as of the time of writing, has not yet received a new release date.

David Lower’s Foreward for The Green Knight can be found in the novel adaptation, or through the link – https://lithub.com/david-lowery-on-the-strange-arduous-journey-of-adapting-the-green-knight-for-film/