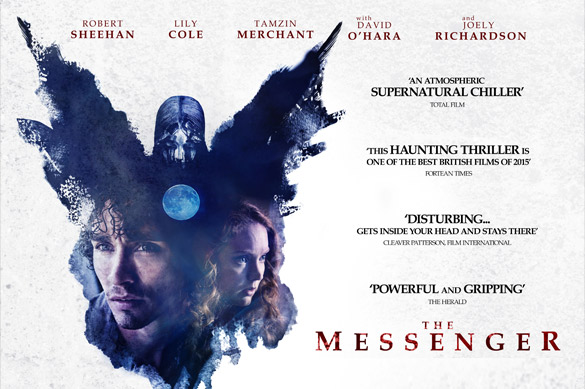 Normally, when someone says a film is morose, you’d expect to be in for a dour and dingy experience; a Tim Burton film without the charm, that sort of thing. When I say that The Messenger is a morose film, though, it is not meant as a criticism. In truth, it is a very thoughtful and engaging film, but it is still morose.

Rightly so. The film follows Jack, a man who the dead come to when they have a final message they want to pass onto their loved ones. This isn’t the usual, Hollywood style of film where Jack is a slick, swarthy magician for hire: no, Jack is a mess in the proper sense, living in a tiny flat, drinking alone, hounded by those who have died violently or suddenly. Always filthy, bitter, angry, Jack fails often in trying to deliver a last message to the living. His gift is not glorified, leaves his life cold and isolated.

In the opening ten minutes, he tries to help a couple of the departed and fails. This is probably the worst part of the film, with some shots looking amateurish or low budget, and a lack of narrative cohesion giving the first few scenes the air of a Film Student’s first Art film. We get images of his past, interspersed conversations happening in the future with a psychiatrist, and a timeline that defies quick understanding. It’s the sort of film which relies on you knowing a bit about its plot before you go in, else you get a bit of a muddled mess.

However, the film gets going when Jack is approached by Mark, a war correspondent and famed journalist who has recently died. He wants to tell Sarah, his TV presenter wife who is going through a very public grieving process, that he loves her and cannot move on without this. Jack refuses at first, but things change when his estranged sister tries to re-establish a relationship with him.

From here, the film really flourishes. Jack is a complex and troubled man, with the question often being raised as to whether he really even sees dead people (I had to get that in somewhere, right?!) or if he is very ill. We see his troubled family past, which is interestingly presented as being the cause of his fucked-up life at first but morphs into something else over time, the present family troubles that his sister faces, and we follow Sarah as she struggles to cope with being both terribly alone and swamped by the public’s attention.

One of the things I love the most about The Messenger is how much its plot works through implications. I may be reading too much into this, but I sense odd connections between Mark’s mysterious murder and the slow pace of the police’s investigations, as well as Jack’s sister Emma’s decision to move her family out of London and Sarah’s condition. It leaves a lot of room for interpretation, deftly implying and leaving gaps for the viewer to fill during the curious shots between scenes.

Director David Blair does make some very interesting decisions in this film, electing to have objects between the viewer and the characters at times, and enjoying trains and other vehicles entering shot. Sometimes this works really well, an empty wine bottle showing that a character has been heavily drinking, but others it’s just off-putting. Most of the poor choices were in the opening ten minutes or so, but this may just be the adjustment period required to accommodate his style. If so, it is an acquired taste, the directing of this film, and one I came to enjoy by the end, but it may put some people off.

What is consistent throughout is Robert Sheehan’s performance. Anyone who’s watched Misfits knows he can do disheveled and sarcastic characters, but he brings a real weight to Jack’s character. There’s a constant burden on Jack, the weight of the dead’s expectations, particularly those of his own father, that Sheehan works to show in every scene. As it is mostly about Jack, the film rests on Sheehan’s shoulders, and he does a great job in supporting it.

Jack’s character, his motivations and struggles, are explored primarily through an interview conducted by a psychiatrist in the latter third of the film, dispersed throughout to break up the scenes. They are probing and interesting, if a little out of place in the beginning, and explore clinically why someone would put themselves through the torture Jack does. After all, as Joely Richardson’s character points out, he doesn’t have to answer the dead’s calls. He can set his own limits, and yet doesn’t, even to the detriment of his physical and mental wellbeing.

The writing is very considered and adroit, with my only criticism being the resolution. Without wanting to spoil it, I think there needed to be some much clearer proof for those around Jack, some more validation that what he’s going through is real. Still, The Messengers is an engaging and thought-provoking film well worth anyone’s money. It handles the notion of being able to speak to the dead in a very serious manner, hence the morose tone, and it held my attention firmly throughout the 90+ minutes.

Though maybe you shouldn’t take someone on a date to it: when I say it’s morose, I mean it, and you might leave him/her with a bit of a funk afterward.