The Other Thing The Internet Is For: Top 5 Geek Webcomics

Webcomics or, as they are commonly called, “Computer Story Pictures”, have been a thing for almost thirty years now and are officially the third best way to waste time on the internet behind looking at pictures of grammatically challenged cats or messing with students by inserting erroneous information into Wikipedia (neither of which are practises endorsed by Geek Pride). There is something for everyone on the webcomic spectrum, a fact that is, in true human style, both awe-inspiring and utterly horrific.

While you are pondering this, be sure to check out these, our Top 5 Geek Webcomics; the best zombified, alien-infested, natural-20-rolling, sarcastic and just plain awesome comics to ever grace a webpage. One caveat though, we do like our webcomics with a little plottitude so you may find that has flavoured this list somewhat. If you think your favourite webcomic has been unjustly overlooked, let us know in the comments! And now, in no particular order…

1: The Adventures of Dr McNinja 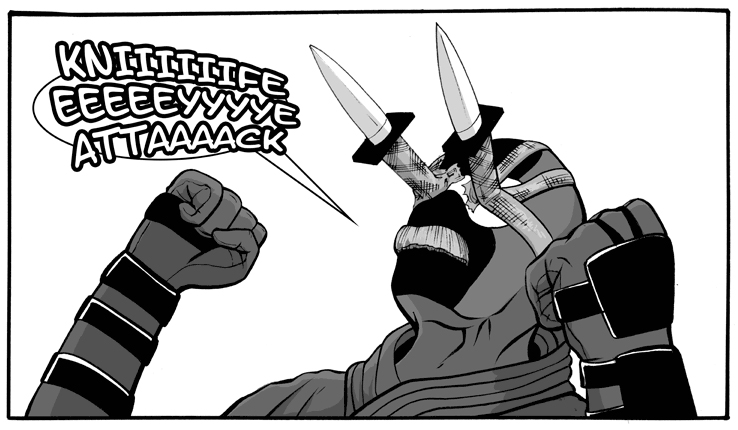 The Adventures of Dr McNinja are pretty much just that; the ongoing and increasing remarkable escapades of a man who is both a ninja and a doctor. Born to a clan of ninjas, our hero decides at an early age to turn his back on the family business and exchange sais for stethoscopes. Along with his gorilla secretary, Judy, sidekick Gordito and mentor Zombie Benjamin Franklin, the good doctor kicks the ass of every time-travelling dinosaur, space vampire and giant lumberjack who look at him twice.

Sounds Good But Why Should I Care?:

I remember when reading comics was actually fun. I remember spectacle and excitement, the feeling like you were riding pillion on a flaming motorcycle and the driver had just lit a stick of dynamite. And so, apparently, does Chris Hastings.

With The Adventures of Dr McNInja, Hastings has created one of the most enjoyable on-going stories in any medium; an action-packed, family-based, sci-fi, horror comedy which utterly redefines the word “awesome” and will make you forget all about the “e” in XTREME. Combining fantastic art, compelling characters and plenty of teeth-grindingly wish-I’d-thought-of-that story concepts, if you only read on webcomic this year, make it The Adventures of Dr McNinja.

2: Order of The Stick

Anyone who’s ever rolled for initiative or “genned” a character will be familiar with this next webcomic’s setup; six adventurers, warrior, thief, bard, ranger, druid, and wizard, fighting monsters and collecting loot while on their quest to defeat the evil undead lich, Xykon. Funny, touching, badly drawn and proud of it.

Sounds Good But Why Should I Care?:

The idea of group of adventurers in a dungeon is nothing new. Even the twist of making them roleplay characters, all too aware of the rules and systems that control their lives, is not a unique one. What The Order of the Stick does have (apart from the charmingly basic line art) is depth. Not, obviously, in a spatial sense; I’m talking about character depth. In the 800 or so episodes released so far, every member of the team has experienced their own long and satisfying character arcs as a complex and compelling tale about the nature of good and evil (and neutral) has unwoven. Add to this a setting that is both familiar to even the most casual roleplayer, but different enough to still surprise and intrigue, and you have the reason this beat out other worthy offerings that tread similar ground . If you only read one webcomic this year, make it The Order of the Stick. 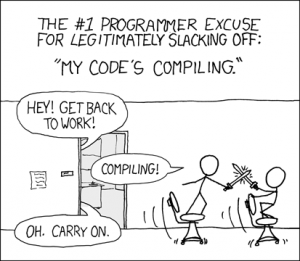 Category: For The Discerning Geek

A self-described “webcomic of romance, sarcasm, math and language”, XKCD is the ultimate geek comic, covering everything from physics and programming to dinosaurs and D&D, with a lavish helping of humanity.

If you consider yourself a geek at all then you should be at least casually acquainted with Munroe’s bittersweet musings on life, relationships and the computer age. Admittedly, I have read more XKCD through referral by friend that actually visiting the webpage, but no conversation about geek comics would be complete without it. Read the unconnected vignettes in any order you like and I guarantee that after five minutes you’ll have thought both  “I don’t get this” and “this comic totally gets me!” in quick succession. The fact that all this is rendered in the most basic line art only adds to the pathos and simple joy this comic can bring. If you only read one webcomic this year, make it XKCD.

Bending the rules slightly, the Tackleford trilogy of webcomics includes Bobbins (being the life and times of a group of contributors of a small urban magazine), Scarygoround (a horror comic featuring mostly the same cast) and Bad Machinery (a mystery comic featuring new characters with a couple of cameos), all set in the small West Yorkshire town of the same name.

Although varying in genres, all three webcomics lead on from one another and share Allison’s distinct style and Northern (England that is) sense of humour. He deftly manages to instil in his characters a very British flavour without making them exclusive in any way, a rare talent that can be missing from a lot of other comics.

The artwork, also by Allison, is superior, evolving from a fairly simple comicy look to extravagant retro-deco splash pages and almost abstract scenes which compliment both the drama and humour like a fine wine. If you like intertwining stories with lots of characters stepping in and out of the action over time, each new iteration focusing on a completely different a…holy shit, it’s The Wire of webcomics. All I can add is that if you only read one webcomic this year, make it the Tackleford Trilogy. 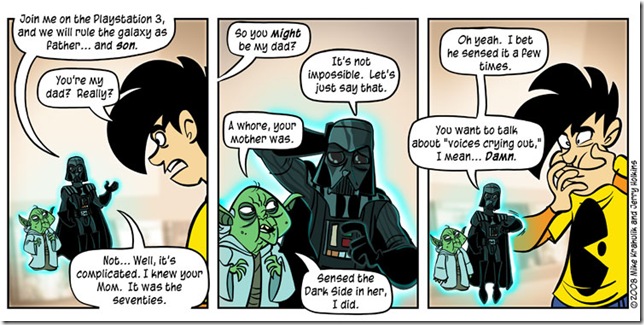 Crass, violent and hugely popular, Penny Arcade brings us the day-to-day musings of a pair of videogame aficionados interspersed with wryly observed satire and dick jokes.

If you have any prior experience of the word “webcomic” then you will know all about Penny Arcade. This is a webcomic so successful that these guys can actually do it for a living. It’s so successful that when an anti-videogames lost a public $10,000 wager and refused to pay, Krahulik & Holkins could afford to pony up the cash and donate it to the Entertainment Software Association. This is to say nothing of their charity work with Child’s Play or their enormously successful gaming festival Penny Arcade Expo. “But what’s the bloody webcomic like?” I hear you ask, like a barrel full of inquisitive schoolchildren floating along a canal. Well, it’s pretty darn good. The art from Jerry Holkins is slick and expressive, often gorily so, and the writing from Mike Krahulik is funny and sharp and, even after fifteen years, still has a talent for skewering the more deserving of the video game world’s celebrities. Prepare for a hit of gaming nostalgia if you decide to start from the beginning (Daikatana anyone?), but if you only read one webcomic this year, make it Penny Arcade.

Trapped in the past, Ben Fee finds himself leaping from life to life, putting things right that once went wrong, and hoping each time that his next leap will be the leap home..........
You might also like
artben feeblog