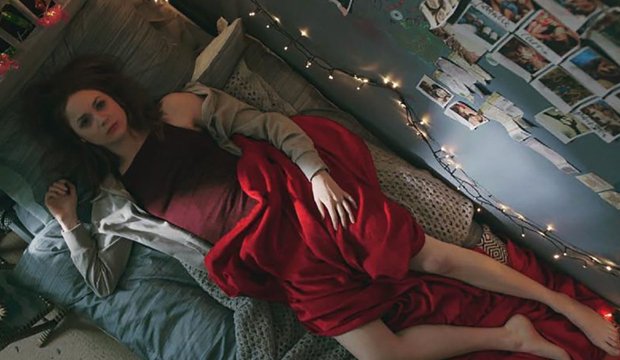 Actress Karen Gillan has always been versatile. We’ve seen her supporting the timelord as Amy Pond in Doctor Who, showcasing a fierce sibling rivalry as Nebula in Guardians of the Galaxy and chasing through the jungle wilds of Jumanji as Ruby Roundhouse, but until 2018, we had never seen Gillan tackle the world of filmmaking from behind the lens.

Making her directorial debut with ‘The Party’s Just Beginning’, Karen has proven once again that there’s nothing she can’t do. Showcasing her screenwriting skills alongside her directing, she has crafted a well oiled vehicle of a film that embodies all of her personality, but also offers just a glimpse of how versatile her talents truly are.

We find her in this film as Liusaidh, a twenty something woman, still living at home with her parents in quaint Inverness, while working a soul sucking job that offers no direction other than painful mediocrity. Her nights are spent indulging in the pub, bed hopping her way through to morning and crafting a little piece of sanity for herself in a sea of despair. All set to the backdrop of a recurring hallucination that recounts her best friend’s suicide.

Told through a series of flashbacks, we see the events that led to said friend’s suicides and how Liusaidh’s own self absorbed mentality led to her missing the warning sides until it was all too late. It also serves as a powerful catalyst when she finds herself thrust into the unwanted role of life coach to two suicidal strangers, and the film explores their unconventional friendships.

At a first glance, it doesn’t seem like it’s an easy watch – and truthfully, it isn’t. It’s a film about suicide, about guilt, and the emotional rollercoaster that goes along with it. It’s a far cry from the work we’ve seen before, but it’s that originality and ambition of the project that makes it worth the uncomfortable nature of the film. The story does finds itself at times disjointed, with plot threads left dangling rather than being fully explored, but it’s the disjointed narrative that makes it so much easier to believe Liusaidh’s situation. There’s a melancholic apathy in what she’s doing, but also a questionable sense of morality that never quite makes it to it’s full potential.

For a first movie, it showcases a lot of different sides to Gillan beyond her comedic and family geared action roles. It’s dark and drama filled, but also nuanced and intelligent, with a voice that is wholly unique and a credit to Karen’s first venture as both a writer and director. Granted, it may not be entirely perfect, but it’s a successful debut that she should most definitely be proud of.