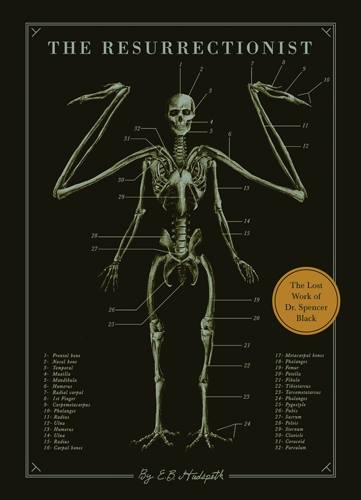 In my childish imagination, God’s wrathful arm was ever-ready and ever-present. – Spencer Black.

The Resurrectionist by E.B Huspeth much like the curiosities that feature in its pages is an intriguing, bizarre and wondrous thing.

Split into two seperate and different halves, the first of which is a fictional biography of controversial surgeon Dr. Spencer Black.

The son of a renowned surgeon and graverobber or ‘ressurectionist’, Spencer and his older brother Bernard spent his childhood helping his father exhume corpses for his medical demonstrations as Professor of anatomy at the Medical Arts College of Boston.

Spencer and Bernard were academically gifted and studied at Boston’s Medical Arts College before moving to Philadelphia where they both continued their studies at the Academy of Medicine following the death of their father, things would soon sour between the brother’s though as Spencer stumbled upon a controversial hypothesis in his studies – what if the numerous mythological beasts were not just figments of mans imagination but the evolutionary ancestors of man?

This biography is presented as a collection of various notes, journals and illustrations, some released from the estate of Bernard Black and others from numerous private collections uncovered by the researchers of Philadelphia’s Museum of Medical Antiquities with the account of Spencer Black’s life bridging the different journal entries.

This first half whilst short at 65 pages is none the less an engrossing tale of a man’s willingness to go down dark paths in pursuit of knowledge and an elusive truth  regardless of the harm and suffering it causes those he holds dear with obvious comparisons being Dr Frankenstein and Dr Moreau and it has an inherently macabre tone as Spencer and his brother grow ever more distant and the academic community which once praised his ingenuity is appalled by his descent into apparent madness .

Where The Ressurectionist really shows its strength is in it’s second half a reproduction of Black’s Codex Extinct Animalia, an anatomical reference guide to ‘the lesser known species of the animal kingdom‘, originally published in 1908 but limited to only several copies before Black cancelled the project.

The detail featured here in the numerous illustrations of the musculature and skeletal functions of eleven different mythological species is staggering and makes good use of playing off the infamous grays anatomy itself published 50 years earlier, with each entry also featuring publishers notes on the different species.

The Resurrectionist is an oddity but that is also its charm.