previous
Doctor Who - Hitting you right in the feels
random
next
A New Way to Save the Planet!!

The Science of Doctor Who – a Brian Cox special!

Brian Cox is Professor Who for one night only, and in his new capacity he’s been called upon to help a doctor. But not just any doctor – the Doctor – played by Matt Smith himself… 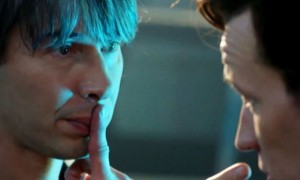 The new trailer for ‘The Science of Doctor Who’ sees Professor Cox pay a visit to the TARDIS after he is summoned by the Time Lord saying,

But Cox is a busy man and attempts to quit the TARDIS to go and give a lecture (silly man). Luckily, the Doctor assures him he’s seen it and it’s “great”, something the science scholar claims is “impossible”. “Naughty word, Brian,” advises our favourite time traveller.

The Science of Doctor Who airs on BBC2 next Thursday 14 November and will see Cox take an audience in the lecture hall of the Royal Institution of Great Britain on a journey into the universe of Doctor Who.

Drawing on the latest theories as well as 200 years of scientific discoveries and the genius of Einstein, the astrophysicist will attempt to answer some of the classic questions raised by the Doctor, such as can we really time travel? Is their extra-terrestrial life in our galaxy? And how would you go about building something as fantastical as the TARDIS?

Take a look at the trailer – starring Brian Cox and Matt Smith – below:

Richie Janukowicz has been a cameraman, knight, web developer, farmer, graphic designer, telesales agent, carpenter, gardener and chef, though not necessarily in that order. He has been forced by Officers of Her Majesty to sign the Official Secrets Act. Twice. He possesses a deep and unwavering love for playing acoustic guitar, dissecting movies, reading fantasy and science fiction, superheroes (both real and imagined), martial arts and bacon. Right now he's trying to juggle a blossoming writing career with being a full time dad. He enjoys the challenge, but would like some more sleep.
You might also like
breakingDoctor WhoDoctor Who 50th Anniversary