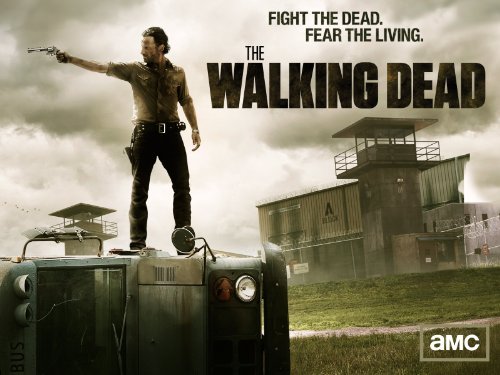 I don’t mean to continue going on about this – to flog a dead Walker, as it were – but The Walking Dead’s 40+ minute run time is just too long for the kind of show it wants to be. Without wanting to be too mean, or harsh, The Walking Dead (TV) is basically a Soap Opera with zombies: it follows the struggles of the human characters, their tales, and their constant arguments. Constant, constant arguments. The Walkers are essentially a backdrop, a force of nature. This same stories could essentially be told in a sudden, constant flood, with water trying to force its way in.

Filling episodes that long with just human struggles is very hard to do: most dramas use their backdrop to add, and generate, storylines. Fights against the law, against a horrible system, against an alien invasion, against an incredible supernatural framework, these all add intrigue and interest. Walkers, however, cannot generate much beyond an immediate threat. That leaves us with only the humans, and their struggles. Not now that we understand them: in Season 1, they were a mystery to be solved. And whilst pure dramas can be interesting, and very well done, it takes either some other elements to rely on – comedy, for example – or great skill.

Sadly, much of the writing in The Walking Dead is not handled with great skill. The quality of directing has increased in Season 4, but the writing remains bogged down in the idea that people arguing is fascinating enough to fill out the spare time. Often, tension or action scenes can reduce the amount of padding, but both were rather lacking in Internment.

AMC have shown, though, with the travesty of Season 2, and their treatment of the final season of Breaking Bad, that low cost is one of their key motivators in producing television programmes. Keeping the budget down. Obviously, entertainment is a business, but concentrating too much on the bottom line is a self-fulfilling prophecy: a cheap show is only rarely a good one, and when it is it’s through incredible inspiration.

There was little inspiring in Internment, though. A good drama, the collapse of health care under the incredible weight of an epidemic where those who die become even larger threats, was somewhat dragged out. There was a good, unwitting metaphor for this episode in the opening scenes, where Herschel and Glenn were forcing oxygen into a patient’s lungs, keeping life going, stretching it out until the inevitable end. The same went for this episode.

Montages, Unnecessary Talking, and action sequences drawn out long beyond the point of tension: all of these are yours to enjoy in this episode. A number of redshirts, including the poor doctor, die, but little of any import happens. Daryl, Michonne and everyone else return in the nick of time to ensure that no Named Characters die from the HyperFlu, and Herschel is a tough son of a bitch, but there’s little else that matters to the overall plot of The Walking Dead.

Even the collapse of one of the outer fences, and the rapid ingress of fifty or more Walkers, isn’t enough to bring life to this shambling episode. Intercut as it is with a tensionless scene of Maggie trying to break in to the quarantine zone to save Herschel from infected Walkers, it loses some of its power. And it’s an important scene as well, because it shows Rick not only taking charge of the Prison, but also him reaching out to Carl for support, trusting him with a heavy weapon. Carl shows that he’s ready for that responsibility, which impresses Rick, perhaps teaches him that he’s also ready for the increased responsibility of the Ricktatorship. 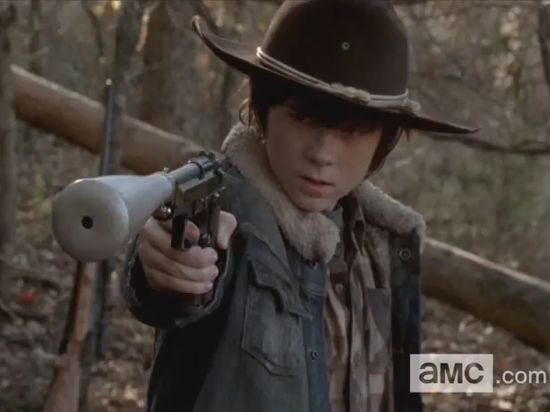 They say talk is cheap, and it certainly is when you’re filming a TV show. I’m beginning to think that is why The Walking Dead has so many Unnecessary Talking scenes, where people talk about how bad things might be when an upcoming event happens, rather than planning to stop it or just getting to the damn event. To a certain extent, that is because there is little one can do against a vicious epidemic, but that doesn’t make for great television.

A golden rule for writers is that each scene must reveal character, or move the story forward. But when you have characters established over three seasons, you have already revealed most of what a character is about. Simply having the same characters act in the same way, only with different people, is not interesting. The scenes which I’ve enjoyed most this season have been the ones where a character is either growing or crumbling: Rick struggling with the group’s need for a leader; Carole being a badass murderer; Michonne deciding to choose the group; or Daryl accepting being a respected part of a society. Herschel being Herschel, Maggie worrying about her father: these are not new scenes, merely new circumstances for them to occur under.

The reason I am writing so much about this is that there is the core of a good show under The Walking Dead. A weekly show about people surviving a Zombie Apocalypse should work. With more care, more quality, or more budget, The Walking Dead could enthrall us every week, as it did in episode 4.

The ending promises a better episode to come. The Governor is, at least, an interesting character with more to be revealed about him. He should generate more story. Though I fear that we’ll just get a bunch of conversations about Michonne’s reaction to him, and whether he should be killed, rather than tense-standoffs and opportunities for character growth.