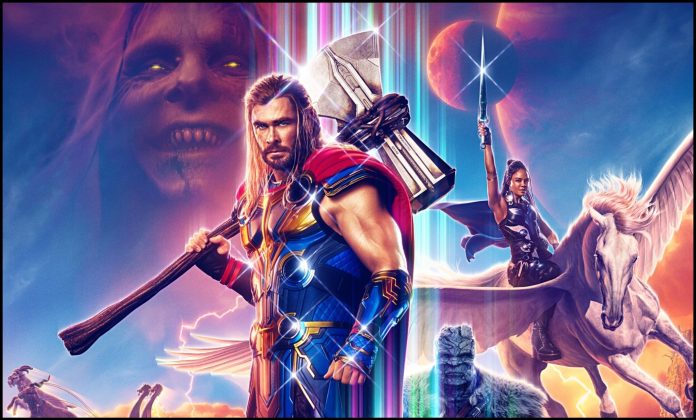 There be spoilers ahead.. be warned!

Thor: Love and Thunder isn’t the best Marvel film out, it’s definitely the best Thor film but its not as bad as I think some are making it out to be.

Within you will find a lot of belly laughs, especially in regards to Thor’s relationship with Storm breaker and the newfound and repaired Mjolnir.. some parts where the jealous axe just appears at the side of the shot are subtly genius and by far some of the funniest moments in the film.

Thing is, and it’s hard to say this, the sheer Comedy of it all is what lets the film down. It’s forced, it feels forced and because of that, we have a very unbalanced movie. Whereas Ragnarok was outlandish it was also well timed and well placed. TLAT is just relentless like it’s trying to one-up that success but overdoing it by trying too hard. Which really takes away from the darker edge that should have been balanced out.

Gorr’s understandable fall into shadow and his redemption and Jane Foster’s fight with cancer and demise are somewhat diminished by all the slapstick Comedy washing around them. Like someone making a real profound and meaningful speech but the music is the Benny Hill theme… you understand the speech is meaningful but the stupid music just taints it. That’s not to say the music in the film is bad, it, as always, is a great soundtrack;  potentially over-egged as well.

All In all, it is an enjoyable film, you will LOL and when it allows you it is quite poignant but it’s a film that tried too hard and ended scuppering itself slightly, or at least failing to live up to its potential by embracing its darker side and balancing it well with its signature comedy.

A shame, all the components were there but it just couldn’t get the balance right. Enjoyable but a lost opportunity.

Load more
Thor: Love and ThunderA shame, all the components were there but it just couldn't get the balance right. Enjoyable but a lost opportunity.