straight to the point  – A great stealth game, which has both style and substance. A well designed, must-have title

I remember first seeing some screenshots of this game about a year ago and being intrigued by it just on the steampunk design alone. It has been hyped up to the max on the internet ever since. Games this hyped up often lead to massive disappointment. The question is though, is this an exception? Thankfully the answer is a big yes!!!

Set in the fictional industrial city of Dunwall, modeled after Victorian London and heavily affected by a rat plague, Dishonored follows Corvo Attano, a legendary bodyguard to the Empress who is framed for her murder and forced to become an assassin to seek revenge on those who conspired against him and to rescue Emily, the daughter of the Empress and rightful heir to the throne, who is kidnapped at the time of the murder. Corvo is aided in his quest by the Outsider, a powerful being who imbues him with magical abilities.

The gameplay takes heavily from Deus Ex: Human Revolution. It is primarily a stealth game, which gives the player path choices and to make decisions, which will affect the story and to either to take a passive or aggressive approach to each mission. Like the upgrading augments element in Deus Ex, the player can upgrade their equipment and buy new abilities. Even the creeping up behind guards, knocking them out and hiding their bodies is there, although that it a staple element in stealth games these days. On top of that it adds magical/supernatural abilities and a retro/steampunk setting reminiscent of Bioshock (the developer, Arkane Studios also contributed to Bioshock 2 so that might have something to do with it). Also, it has the ammo rationing element of the Resident Evil series.

The aim of each mission is usually to break into a heavily guarded building or area of a city and either kill or passively eliminate a character, responsible for your character’s current predicament. The great thing is, you can take different approaches to each task and different paths depending on what suits you.

It is possible to fight your way into a building at times, killing anybody or anything , which stands in your way but this may affect the outcome of story in a negative way and the next mission may have more weepers, which are plague victims who have become mindless zombies, due to less city guards. The trick is to get from A to B without even being spotted. if you do kill someone, they shouldn’t see you coming. 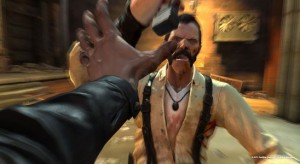 Thankfully you have a few things to help you out. Using Corvo’s magical/supernatural abilities is key to entering an area unnoticed. The first ability you get is “Blink,” which allows you to dash between rooftops of nearby buildings and access areas you cannot reach by jumping alone. “Dark-vision” allows you to momentarily see guards and their line of vision through obstacles, giving you a bit of an idea of what to expect when you are approaching a room. “Possession” allows you to use the bodies of animals and other humans to reach the otherwise unreachable. Also, using your crossbow when loaded with sleep darts allows you to eliminate guards passively and quietly. If you want to kill a guard, without others noticing then using a crossbow dart after unlocking the “Shadow Kill” passive ability will turn the target into ash, thus destroying the evidence.

Even with these abilities at your disposal, you can still be spotted if you make a wrong more and often all of the guards in the vicinity will hunt you and attack you when one if alerted to your presence. If you can’t escape, then your sword, pistol and grenades are your best bet to overcome then, combine with abilities such as “Windblast,” “Bend Time” and “devouring swarm.” The latter being an ability to summon as swarm of rats to attack your enemies and take care of the corpse too.

To upgrade your abilities you also need to collect runes, which are scattered around the city and completing some side missions also rewards you with these. They can be found by holding a human heart which beats when you are pointing towards one and beats faster the closer you get to it. Bone runes, which can be equipped to give you some extra attributes, can also be found this way.