The show opened with “Don’t Stop Me Now” by Queen and dancers promoting Just Dance 17. Bonus points for Queen straight off! As they said “You haven’t lived until you’ve had a lion singing to you from your TV”. Just Dance 17 will be released by Ubisoft on Xbox One, Playstation 4 and PC in October.

It’s Ubisoft’s 30th birthday this year, and they’re determined to celebrate with lots of great new games and experiences.

“You may remember he next game from the end of last year’s show, when it BLEW YOUR F@#$!ING MINDS!” 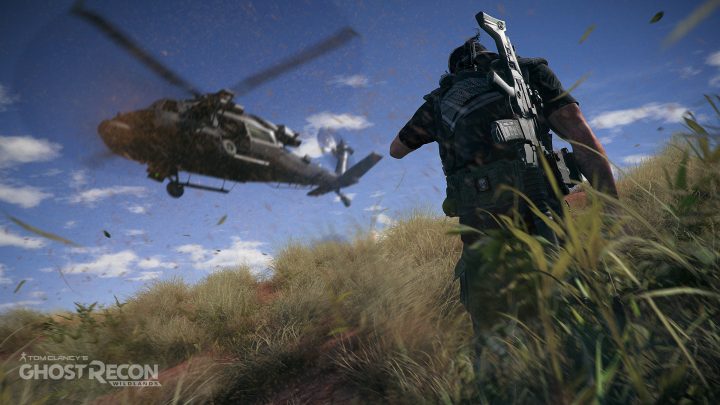 Bolivia is a country where the Coca leaf is used for everything – From refreshing soft drinks to treating airsickness. In Wildlands, a Mexican drug cartel, the Santa Blanca cartel, takes over the country in cooperation with a corrupt government, and uses the coca leaves for another product – Cocaine. this makes Bolivia the world#s biggest narco state. The Ghosts are sent in to topple the partnership, and the the drugs. It’s all about options and freedom, so they showed us an example mission centered around “El Pozolero”, or The Stewmaker. He is called this because he makes bodies ‘disappear’, so he really does know where the bodies are (or aren’t) buried. The ghosts in this case are opting to find him, and find out what he knows instead of killing him straight up:

After getting us all worked up, they then broke the news – Wildlands will be released on March 7th, 2017. It’s going to be a long year!

The next section started with a very odd video, but all became clear when Trey Parker and Matt Stone were introduced.Talking about South Park – The Fractured But Whole, they talked about changes they made to the sequel The Stick of Truth. you’re still paying the new kid, but after being Kig of the world, you’re now back to being just the new kid, but with a funny crown. All the kids are playing at being super heroes now (With Cartman somehow responsible for their ‘tragic backstories’) in a twisted real life RPG (You fill out a character sheet on “CoonsterGram”).

Talking about the changes they made between the 2 games, Trey talked about how he’s a big tabletop gamer, and implied that this influenced their process when making changes to the combat system. Characters can now move during combat, to seek advantage or cover. You and your enemies are able to use, or be affected by scenery, and some powers will move people or scenery to help you win. In a growth from The Stick of Truth, your farts are now so powerful they can affect time, allowing you to reorder the game turns.

Due for a December 6th release, preorders on XBox One, Playstation 4 and Steam will get The Stick of Truth free from Ubisoft.

Next they looked at the Division. Having broken records on release, there are now over 10 million players, and they average 3 hours gameplay per day – Not too bad!

The free expansions have been introduced to the game, but here they look at the paid expansions for Season Pass holders. The first expansion, out on 28/6/17 for PC and Xbox 1, and 2/7/16 for Playstation 4 is Underground, introducing new missions in the sewers to pursue a new enemy – Every time you venture down, the mission will be different. And it will just be the first!

As a present for Ubisoft’s 30th birthday, when Underground is released, Ubisoft Club will offer 3 new FREE skins:

Celebrating the success of the Tom Clancy franchise for Ubisoft. I can’t wait for that, and Aisha Tyler said she couldn’t wait to run around New York in a skin tight black outfit without getting arrested!!

They then introduced us to Survival, the next Division expansion:

Stuck in a blizzard, no food, water or comms, let alone weapons – It’s survival of the fittest. Will you survive?

2016, of course, is the year of VR – HTC Vive, the Oculus Rift – and Ubisoft started by showing Eagle Flight, a flight sim with a difference. Available soon for all VR systems, Eagle Flight is set in Paris without humans. Everything is overgrown, and the animals have escaped the zoos and taken over. Playing as 2 groups of 3 eagles, the demo crew, including Palmer Luckey, the creator of the Oculus Rift, fought to support each other and get the prey (a rabbit) back to the nest before their opponents could intercept the.

With brightly coloured, cartoony graphics and a clear interface, it was very impressive and fluid. Eagle Flight  will be available in the Fall/Autumn.

Next, we’re told that “VR is all about opening up the Final Frontier”, and a familiar voice says “Captain’s Log…”

LeVar Burton comes on stage to discuss the fun he, Karl Urban and Jeri Ryan had playing the game -It looks epic. apparently at the Engineer position, it was easy to slip back into being Geordie, with all the technobable, but the Captain’s chair was much more challenging for someone used to taking orders…. It definitely looks like a lot of fun, though the Artemis crew may be a bit downhearted.

Next we’re introduced to a new game from Ubisoft: For Honor…

Looking at the background of the story, you can choose 3 paths. As a Knight, you can join the Blackstone Legion. A a Samurai, you can help the Empire regain it’s honor, rebuild and grow. But as a Viking – You can help your people survive the disaster, and rediscover what it means to raid, to plunder – To live!!

Even in Alpha it’s impressively fluid in melee combat, and the interface is kept minimal – I’ll be keeping an eye on this one! Its released on Valentine’s Day, 2017 – So remember, wanton slaughter and conquest mean “I love you”

Ubisoft Reflections is about experimental and unusual games. Last year, Ubisoft brought us Grow Home, and people fell in love with a little red robot that wanted to learn to fly and get home. This year, it’s time to Grow Up.

Released in August, Grow Up will be available on PC, Playstation 4 and Xbox One.

After a booming, wrestling-style into,  new tag team of the creators of Blood Dragon and Trials came on stage. With a booming intro, it was time to meat Trials of the Blood Dragons:

Out now on PC, Playstation 4 and Xbox One, it just goes to show that the 80s is back in fashion! Ubisoft have definitely given us an unexpected mash up there. I’ll just leave my socks off when I put my loafers on for work in the morning….

The next session looked at the upcoming Assassin’s Creed movie – They really do mean multiplatform now, but no game this year, so everyone can take their controllers to the cinema and try to take over Michael Fassbender – some more so than others 😉

They threw in an Exclusive Behind the Scenes feature:

Our next section looks at a game we’ve only officially know about for a few days – Watchdogs 2.

It’s definitely looking dynamic, with hacking, melee, parkour and anarchy.The environment can be hacked and manipulated about you for various reasons, giving you lots of options as you move about San Francisco. Other players can also be encountered, just like in the original -there’s a definite modern day, irreverent take that reminds me a little of Hackers –Not a bad thing.

It definitely feels familiar, but hopefully they’ve improved on the original, to make it even better. A least in this game, other players are representing different members of DedSec when you bump into them.

They also talked about the cooperation between Ubisoft and Sony on a Watchdogs movie, already announced, and that all DLC for Watchdogs 2 will be exclusive to Playstation 4 for the first 30 days – When will they realise platform exclusives are more frustrating than anything else?!?!? Very few people can afford to buy a new console just for exclusive DLC.

And finally, a mystery release – Steep.

Extreme Sports on a mountainside – How crazy can you go? It’s a simple matter to change “sport” too, so you don’t get stuck easily. The sense of scale and motion is impressive, and it flows well. You can also encounter other players as you move around. Social Gaming, eh?

Challenges suitable for different “sports” are scattered about the mountain to be found on the fly, keeping up your interest and encouraging you to explore all of your options.

The developers who had given talks were invited on stage by the head of Ubisoft at the end for a thank you, in appreciation of the work they put in for us – It’s definitely not a bad thing to remember how much work goes into our hobby – And that the developers are gamers themselves!! So many interesting new games to explore and play, and so much cool new content for games we already play. roll on 2017!!

I'm just this geek, you know? Love comics, though not a regular reader - Love gaming, PC, board games and wargaming, and reading Sci Fi. Chairman at my local wargaming club, I play X-Wing and occasionally 40k (But mostly X-Wing!) By day I work in eCommerce, by night I'm either still working, reading, watching or writing :)
More Goodness
MediaNews / Features