All Hail the Helix Fossil – whilst it may seem to some that this phrase is gibberish being typed out by someone who should go seek help, there are some who see this as the latest form of prayer to a higher god.

Whilst it may seem like a generation ago for some, Twitch Plays Pokémon launched on 12 February 2014 with Pokémon Red. To those blissfully unaware of this phenomenon, an Australian programmer altered the code of an existing system to create a script which captures specific messages (directional commands, ‘a’, ‘b’, ‘select’ and ‘start’).

Pokémon Red was chosen due to its nostalgia value to the author, as well as its ‘forgiving’ turn-based structure and lack of reaction/time sensitive gameplay. Additionally, during the stream there were some changes made to the way in which the chat influenced the gameplay, mainly the introduction of the ‘democracy’ system due to problems encountered on Day 5. After it was implemented, the chat-based system had two ways of playing the game – ‘anarchy’, where the chat would completely control the character, and ‘democracy’, where after every ten seconds the order with the most votes would be implemented. And you wondered why we needed ‘Democracy’…

In this game, only a few things were certain

– If you had an item that could be thrown, odds were it was going to get tossed sometime in the game. Notable exceptions to this were the Helix Fossil and the SS Anne Ticket, which were instead regularly ‘consulted’ in and outside of battle

– The pause button was regularly pressed, resulting in the Pokédex being randomly consulted or checking we still had the same amount of badges as last time. Apparently, Red suffered from short-term memory loss, and had to find out what a Bulbasaur sounded like on a regular basis…

– If we were heading to the PC, there was a good chance that at least one Pokémon would be released into the wild. This resulted in memorable events such as the dual release Charmeleon ‘Abby’ and Rattata ‘Jay Leno’, and not to mention ‘Bloody Sunday’ (where around a dozen Pokémon were released in a single day…)

At its peak, the stream had 121,000 people typing in commands, commanding Red to push onward whilst consulting the Helix at odd intervals. Additionally, some of these people are interested in hindering rather than progressing. The fact we managed to get anywhere at all is astounding. Along the way there may have been some bumps in the road – releasing our starter Pokémon and our inability to cut a single tree were just some of the many challenges we encountered – and yet we still managed to defeat the most powerful trainers in the game. 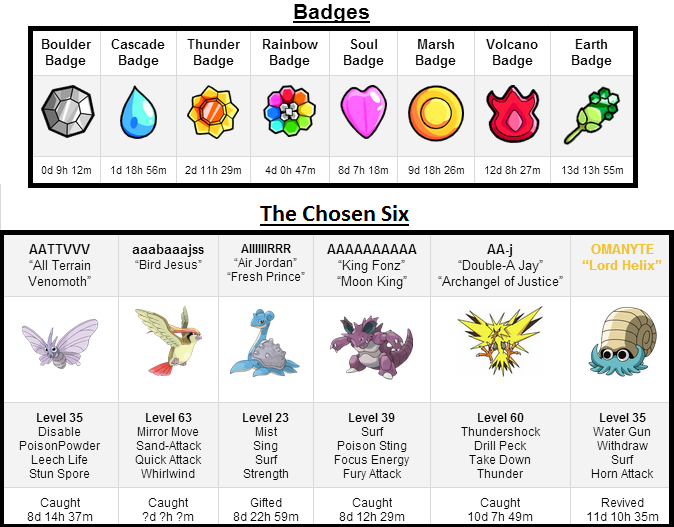 What interests me most of all though is not the fact that we did it, but is in fact the stories we made along the way. TPP was a game we were all a part of, and now it has its own mythology. I mean, over the course of a week the Helix Fossil, a single part of this online phenomenon, was hailed as the messiah. Some fans have even gone to extreme lengths to show their commitment to the mythos we all created, creating terrific fanart and fan theories, and even online bibles dedicated to the Helix.

This is one of the things I truly love about TPP – the mythos we have created. We have grown attached to our Pokémon and given them nicknames and backstory, and even mourn them when we accidentally release them into the wild. We decided that the Flareon was the false messiah, sent by the rejected Dome Fossil to lead us astray. We decided to establish out Pidgeot as Bird Jesus, sent by Helix to guide us. We saw to it that we tamed Gods and Kings to reach the journey’s end.

But the TPP Train doesn’t stop here – after Pokémon Red was completed, the task of becoming Pokémon  Master was passed from Red onto ‘AJDNNW’, or ‘A.J’ for short, on 2 March 2014 as the stream changed to Pokémon Crystal. In over a week, they have secured all 8 Gym Badges, and already have survived great ordeals (rogue TPP viewers assembling to ‘Release the Gator’, only to be eventually fought off by the masses). The speed of this success can probably be associated with the decline in popularity, as the stream now averages at around 10,000 people per day, which is considerably less than the original. This decline in popularity has led to easier control over the game, allowing for more ground to be covered. However, the mythos has not suffered in the slightest, as ‘A.J.’ fights to become Pokémon master alongside ‘Lazorgator’ (a Feraligatr nicknamed as such because of his fondness for Leer as a baby Totodile), ‘Brian’ (another Pidgeot…but he’s not the Messiah, he’s a very naughty bird). Already, the trainer has suffered losses (the loss of ‘Admiral Senret’ and ‘Prince Omlette’ the Togepi…not to mention the use of a Masterball to catch a Goldeen of all Pokémon), and it seems that the lack of idols and religious figures in this generation has led to a new ideology. This generation, we don’t need a Helix Fossil to consult every five minutes. We have no need for Messiahs and Archangels.

One of the most important parts of this game though has to be the fact that you get to actually fight Red on Mt. Silver…and the programmer has made it so that his team contains all the Pokémon Twitch Users used to defeat the Elite Four. That’s right, A.J. have to fulfill the prophecy and will take on Gods and Kings to finally become a Pokémon Master.

I’ve enjoyed TPP, and am glad the series will be continuing to Pokémon Emerald. but it is unlikely that any other future ‘Twitch Plays’ series will match the hype that surrounded the original. Already, there are other ‘Twitch Plays’ channels out there – ranging from Tetris to other Pokemon games – but none of them have matched the popularity of the first TP Channel. History may not remember this moment, and it may not be noted in history books…but it sure was a memorable moment for all those involved.