previous
What is early access, and is it worth your money?
random
next
FALLOUT 4.....Things I DON'T want
Video Games & Tech
0 likes

Republic Commando is 2005 tactical first-person shooter set in the Star Wars universe. The game threw you into the mist of the Clone Wars as one of the titular commandos, specifically the commando leading the 4 man Delta Squad. The game utilised some simple but cool squad mechanics and placed you alongside some fairly decent allied AI. Playing as a commando specifically removed you from the cannon fodder nature of regular troopers while staying away from the hugely powerful Jedi figures that populate most Star Wars games. To my knowledge, the game was a fair success, both monetarily and amongst fans. There was even a sequel planned, titled Imperial Commando it would have followed the events of the first game and dealt with the way in which Order 66 and the rise of the Empire effected the intrepid Delta Squad.  Unfortunately, as is the way with several LucasArts projects, Imperial Commando fell by the wayside and was canceled. It’s a somewhat tragic cancellation because, in my opinion, Republic Commando was not only a fantastic game in its own right, it was also an excellent example of how to expand on the existing universe of the Star Wars canon. 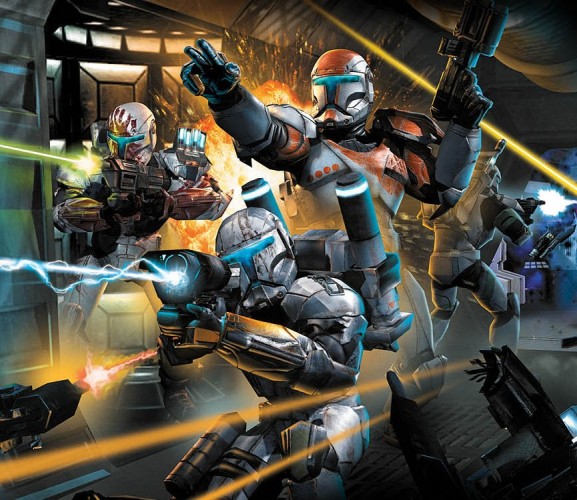 To level with you, I haven’t actually delved into huge amounts of the Expanded Universe. I’ve played a lot of the games that form some of it, but the literature that is the bulk part of this new canon is something I haven’t experienced. That is not to say I am completely ignorant of events depicted therein, I’ve gathered bits and pieces over the years, it’s just that I have never committed myself to actually sitting down and working my way through the reams of stories that make up the EU. And here’s my issue: as much as there are some cool and interesting parts to these stories, I’m a big fan of the idea of Mara Jade for example, there are also some real dumb creations. For example, SPOILER ALERT, Chewbacca’s death. 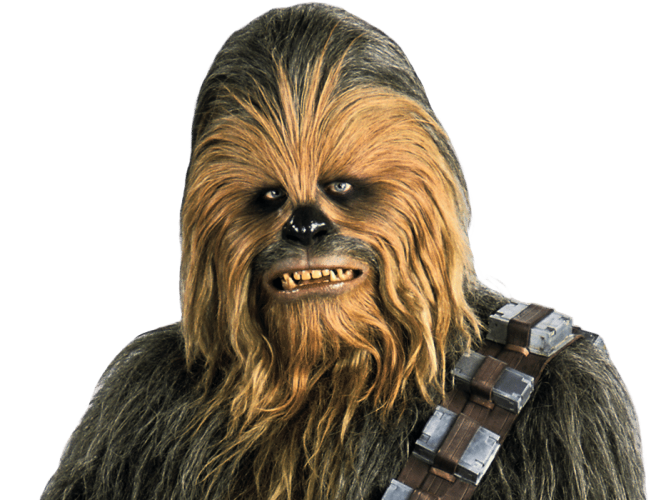 Now, I’m sure there are plenty of people out there that will disagree with me on this but, as far as I’m concerned, Chewie’s death was not a highpoint for for the Expanded Universe. Not only does it kill off a beloved character, not something I’m dead against as I routinely subject myself to Game of Thrones, but it does so in a way that tries to cast a facade of heroism over an event that’s actually just poor story. For those that don’t know, Chewie has a moon dropped on him. That’s it. During the Yuuzhan Vong War, more weird stuff there, the villainous Yuuzhan Vong utilise the tactic of dropping a goddamn moon on a planet. During the evacuation, Chewie is basically unable to get off planet in time to save himself. Now this is partly because he was staying behind to save people sure. But it’s also because a blast of wind knocks him away from the Millenium Falcon and Han Solo’s son realises they can’t stay any longer without also being crushed and flies off. So, to recap, Chewbacca, great hero of the Rebellion, gets knocked on his arse by some wind and then gets left to have a moon fall on him. That’s not heroic, that’s stupid. I guess you could try and argue that it’s putting Chewie in the same place as the doubtless thousands/millions of civilians who also died, showing that death comes to heroes and regular folk alike. However, I think it’s more likely that the event was written with the intention of putting a load of grief tension on Han and his son, Anakin, while believing that it would seem like a big, cool way for Chewbacca to go. I disagree. If you were using a moon just to get him sure, that’s badass. That’s showing that Chewie is so much of a threat that the only way to beat him is to use a moon. Ridiculous, but cool. Him just being left behind because of bad weather is trivial. 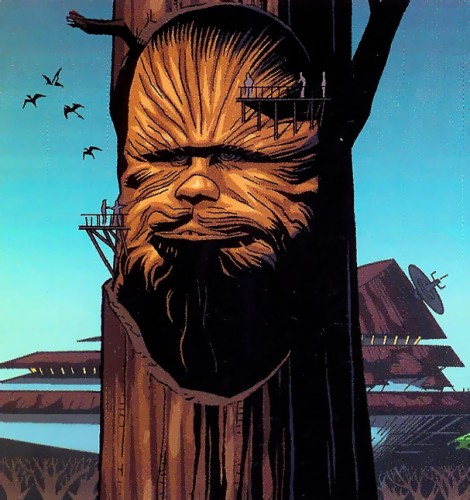 Ahem. That was a bit more of a rant than initially intended. The point is the Expanded Universe is somewhat of a mixed bag. And I’m not going to pretend that Republic Commando is a perfect game. There’s certainly a bit of a dubious ending in the form of the squad’s abandonment of Sev, though admittedly this can be somewhat forgiven with the idea of the clone’s pretty much programmed obedience. The main thing for me however was that Republic Commando was smart with the way it wove its narrative through both existing and expanded canon. It created real, engaging characters that led us through a universe that was both familiar and new. We already knew what a Wookie was and we’d even seen what a Trandoshan looked like, in the form of Bossk, but Republic Commando took us into the heart of the conflict between Wookies and Trandoshan slavers, lending an immediate story and emotional reaction to characters that were previously almost conceptual in their nature. It somewhat reminds me of Batman Beyond, a notably excellent series, in that, just as in Beyond, Commando worked not by throwing a ton of unknown information at us or just trudging through the same old thing but by placing us in a world we already know just, twisted a little. So we’ve seen the battle of Geonosis from the perspective of the typical Jedi heroes, that epic confrontation as lightsabers sprouted all across the arena. But what else had to happen to allow the Jedi just to go in swinging and flipping across the battle? I guess that’s the real question that Commando asked. What had to happen behind the scenes for the Jedi to do what they do? 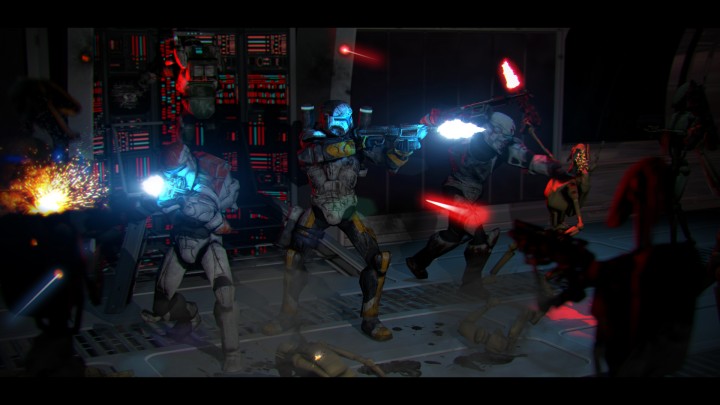 The answer is a lot of droid killing. A lot

This question is what makes Republic Commando such a great game, such a great addition to the canon of the Star Wars universe. It’s what makes the loss of Imperial Commando such a shame. As much fun as it is to swing a lightsaber, it’s all too easy to get caught up in the power of being a Force user and kind of forget the point of all you’re triple flip figure-of-eight slashing. And if you’re just a regular trooper well… chances are you’re just counting the seconds till you get blown up/blasted/bisected by a four-armed cyborg maniac. 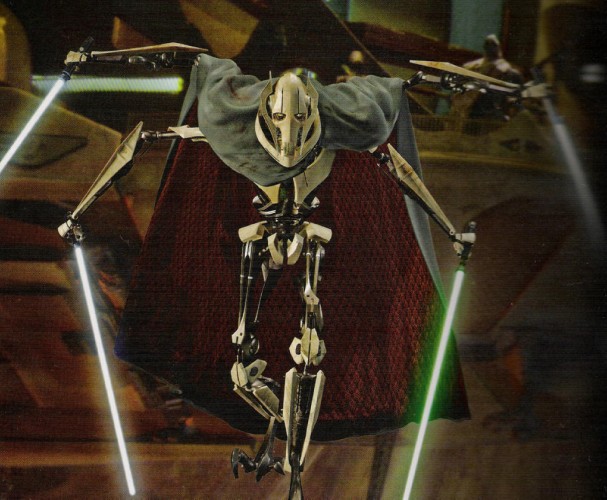 This guy. This freaking guy

Becoming a commando, on the other hand, means that you get see a side to things that twists your perception. It makes the familiar, unfamiliar. And that’s smart. It means you get to take a hard look at the difficulties of war but it’s not from the idea of “Oh my god look at all my fellow troopers getting chewed up by these giant droid spiders”, though that does happen, or even the “Oh no all my clone troops who trusted me are getting chewed up by these giant droid spiders but at least I can do this sweet backflip and then throw LIGHTNING FROM MY HAND” perspective. You see the shadow war, the hard fights that happen just behind the events you already know.

Expanding a universe is about telling new stories. And yes it is cool to see familiar faces in those stories. They’re part of what tells us that this is still the same universe we know and love. But it’s also about being smart and treating that universe, and those pre-established stories, with respect and intelligence and creativity. Republic Commando, to me, is one of the best examples of the Expanded Universe because, aside from what is just some really fun gameplay, it wholly embodies that fusion of new and old in a way that deals with both in a way that ensures the story doesn’t use either as a crutch. The characters and the story exist in their own right but they also play into your pre-established knowledge of the Star Wars universe. It’s actually one of the reasons I’m excited for Episode VII, because even though the Han and Chewie reveal was amazing, it wasn’t shown until the very last moment of the second trailer. The trailers instead choose to place their main focus on the new characters, the new events, the new story. New stories in a familiar setting. Just remember that the familiarity of that setting doesn’t excuse you writing a poor or mediocre story. As much as we may love the canon, any new story should be able to stand on its own merits. That’s what Republic Commando did. You could pretty much play the game with no former knowledge of Star Wars and still thoroughly enjoy it, still get a great narrative experience.