previous
Check out the first 13 minutes of South Park: The Stick of Truth!
random
next
PS Vita Slim Review
Video Games & Tech
1 like

TitanFall: Beta is now open for PC and Xbox One 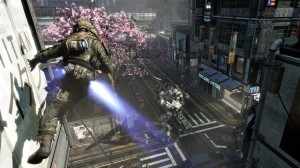 Following a closed program, that started earlier this week, EA and Respawn Entertainment have began today to open the Xbox One and PC TitanFall betas to the whole world.

Developed by the creators of the Call of Duty: Modern Warfare series, TitanFall pits two teams of six pilots against each other in a battle for natural resources, on a future war-torn planet. Pilots are able to take control of gigantic mechs called Titans and fight it out in some of the slickest robotic combat since Ripley met the Queen.

I first played TitanFall at an event last year and I have been waiting for it impatiently ever since. After sinking most of this weekend into the beta, I can confirm that it seems to be everything that I had hoped for so far and it’s shaping up to possibly be the most original first-person shooter in years.

TitanFall doesn’t have the fancy environmental destruction or physics of Battlefield 4, but it evolves the shooter formula in such a way that it feels like the first genuinely next-gen game I’ve played. The level of balance and movement mechanics feel like nothing I have ever seen before and the visuals are stunning, despite the game running on Valve’s ageing Source engine.

The beta is open for all Gold subscribers on the Xbox One dashboard now and should be available on Origin for PC users later today. The beta is currently scheduled to run until at least the 20th February and we’ll be back with a full review when the game launches for PC and Xbox One on the 14th of March. An Xbox 360 version is due for release on the 28th of March.