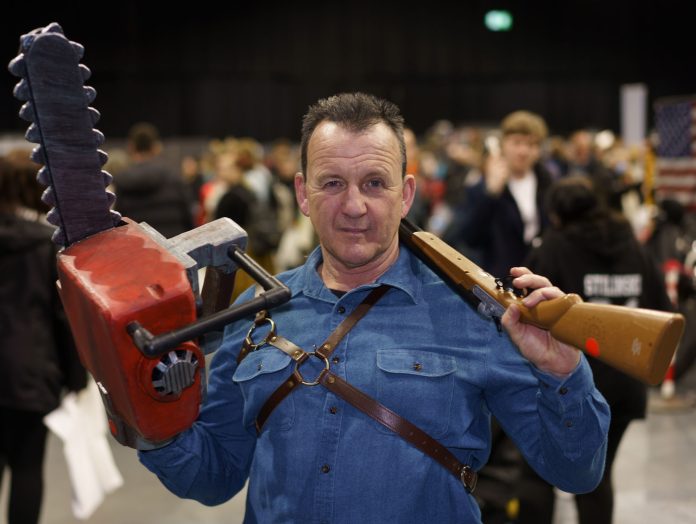 Wales Comic Con (actually based in Telford) has justifiably gained a reputation for having a slew of high-profile guests, and this was no different.  The headline of the event had to be Bruce Campbell, making a rare UK appearance, but this was just the tip of the iceberg.

The line-up of guests for April 2022’s Wales Comic Con has to be their most ambitious yet, with everyone from Sam J. Jones and Christina Ricci to Julian Glover and Summer Glau.  The highlight for me, however had to be meeting the inestimable Gigi Edgley.

Also included this year were stars from the AEW wrestling league.  However, as I know no more about wrestling than a tea leaf knows the history of the East India Company, this aspect of the con pretty much passed me by.  That said there were several guests resplendent in wrestling colours.

For pulling together such a diverse range of guests from the spectrum of science fiction and fantasy, the organisers should be commended.  In this regard, the logistics of the event seemed to be impressively organised.

That said, this was not a glitch-free event.  The queue to enter the event was as mammoth as it has always been.  This is due in part to the significant draw that the guest list has for Wales Comic Con and it seems that the organisers have not yet developed a solution for this problem.  Thankfully, it was not raining this time.

Inside the event, there was much less queuing, with most of the queues typically being for signings and photoshoots with Bruce Campbell and Christina Ricci.  Naturally, with all the focus on these guests, it meant opportunities to chat with Gigi Edgley and Julian Glover that much easier.  They had fantastic stories to tell about their experiences on the set of Farscape and Star Wars, respectively.

Along with the guests there was a plethora of traders, but many of these seemed to be resellers, rather than actual creators.  There were also some authors, such as C. L. Raven, but these were very much in the minority.  Rather than the authors having their own designated area, they were instead scattered throughout the event, along with the artists.  There was indeed a space for a designated author’s area, as the gaming arena, hosted by the cosplayer Tabitha Lyons, was huge.

Despite the numbers at the event, there were only crowds at the height of the day and they were mostly around the traders’ area, which could be avoided if preferred.  The food availability had been increased and offered slightly more choice than last time; however, the prices were still exorbitant.

Despite these issues, Wales Comic Con was still an excellent convention overall, and remains a highpoint of the geek calendar.  This is due mostly to their high-profile guests, but with the event’s issues being further resolved Wales Comic Con could well become the UK’s top conventions.

Load more
Wales Comic Con - April 2022 Wales Comic Con (actually based in Telford) has justifiably gained a reputation for having a slew of high-profile guests, and this was no different.  The headline of the event had to be Bruce Campbell, making a rare UK appearance, but this was just the...