When I watched the Playstation 4 announcement in February, I was drooling over Watch Dogs from the get-go. Now I’m not able to control the drool any longer, and I’m dehydrated to the point of looking like the bad guy at the end of Indiana Jones and the Last Crusade after he’s drank from the wrong cup.

Joystiq have reported a couple of details that are quickly making sure that I’ll be penniless come Christmas as I’ll NEED a PS4, and NEED this game.

Firstly, the online multiplayer will have an element of voyeurism and invasion of privacy from player to player. If you remember in the demonstration in February the game’s protagonist was being watched by someone who’d hacked into security cameras (before the voyeur themselves were hacked)… this will be an active mechanic. Not only that, but being able to hack other players’ mobile devices to plant a virus will be another way to hamper their progress.

Senior Producer at Ubisoft Montreal Dominic Guay said “We are not making any compromises in terms of dynamism or interactivity”. Speaking at a press event in San Francisco earlier this week, Guay continued by saying they want to be “breaching the wall in action-adventure between single and multiplayer” , citing that Watch Dogs’ multiplayer mode will be an almost seamless experience. However he reassured everyone that the game can be played “completely offline” should you wish to.

Hacking is a small part of the game, but Ubisoft Montreal are going that step further in actually consulting an internet security firm for feedback on what is feasible and what isn’t. They’ve been working with Kaspersky Lab with this in mind, all with a view to make the hacking experience that much more believable instead of the super-speed Hollywood hacking where someone types on a computer for 10 seconds before droning “I’m in…”. 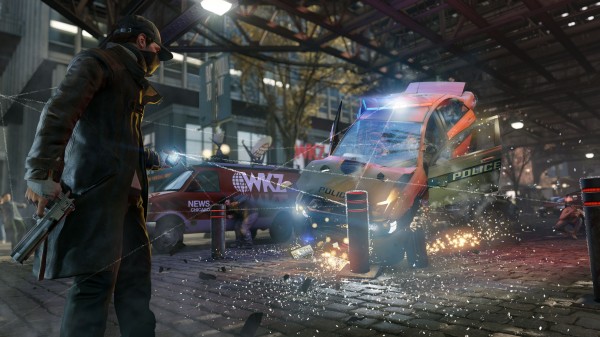 Although only a small part of the game, Ubisoft want hacking authenticity

“They have really hardcore experts there on hacking.” Guay said, “We send them some of our designs and we ask them feedback on it, and it’s interesting to see what gets back. Sometimes they say, ‘Yeah, that’s possible, but change that word,’ or, ‘That’s not the way it works.'”

Although hacking isn’t always necessary, Ubisoft have always been very thorough in their game design. “It’s not about the minigame that will let me open the door, it’s the fact that I’m making a plan. I’m making a plan of how I’m going to chain hacking, shooting, traveling the city and driving to achieve an objective.” said Guay.

Another interesting bit of info is that there will be a companion application for mobile devices that will be released at the same time. The app has been in development for about a year or so already, and will allow it’s users to play a version of Watch Dogs, as well as interact with console players.

Now you just need to wear a baseball cap and a trenchcoat, and you’ll feel invincible as you go about your daily business… that is until your mum rings asking you to pick up some milk.

Movie and videogame geek, basketball player, guitarist, waffle connoisseur & expert in being a slacking bastard. You'll find me gaming on PS4 as "SpasmicPuppy" most of the time... I'm addicted to Destiny.
You might also like
androidbreakinggame