As my co-writer and Grover loving pal Ben Fee will attest, one of the best things the internet can offer the lowly surfer are webcomics. Last time we looked a selection of the best of what teh webz had to offer. But my esteemed colleague overlooked some absolute goliaths of the webcomic world. I am here today to correct this. 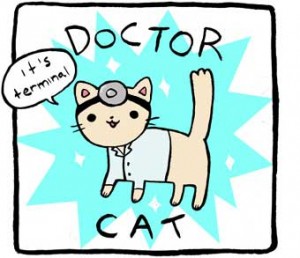 It’s a hospital drama about a doctor, who is a cat. His best friend is Human Nurse. There’s really not much to say about it other than that. Look for it here http://doctorcatmd.com/2011-01-10/doctor-cat

Because, in the words of every fifteen year old girl on the internet Dr Cat is “totes adorbs!!!!” Being dead inside and thus immune to cute (unless you show me a Weiner dog or an Italian Greyhound) I can’t comment on his cuteness, but it is funny Dr Cat says “thank mew” and I love puns. 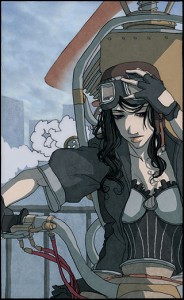 I can’t describe it better than the Legendary Warren Ellis did at the start of this incredible story, so I’ll let him do it:

“22 years ago, twelve strange children were born in England at exactly the same moment. 6 years ago, the world ended. This is the story of what happened next.”

You mean apart from its written by the guy who wrote Transmetrofuckingpolitan? It’s clever, it’s dramatic and it’s drawn beautifully. Warren Ellis has once again created a comic that makes you care about who you’re reading. It’s witty and sexy and should be made into a TV show. 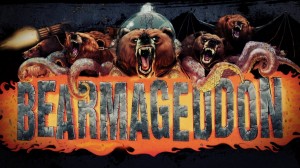 Joel Morely is a twenty something gamer with no real aspirations. Every night he comes home to play videogames with his little brother. After Joel misses rent payments his father kicks him out, Joel and his friends Jeremy, Burton and Nigel decide to live as hippies in the woods. Everything was fine, until the Bears came.

Firstly, if you don’t know Ethan Nicolle’s work, go and Look at Axecop. It’s just been made into a TV show and it’s fabulous. So yeah. You need to get involved with this project because a) it’s paying for Ethan’s wedding and B) Octobear. Yeah. If you though bears could be any more awesome, Ethan takes your dreams and gives them cocaine. 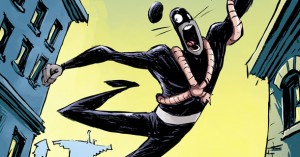 Ricky is a masked hero known as Ratfist who fights crime with his rat pal Milt. He wants to pop the question to his girlfriend (who is deathly afraid of rats) while simultaneously investigating a key he found in a lab he had infiltrated as Ratfist. Also in said lab he is bitten by a radioactive rat and begins to turn into one.Hilarity ensues.
Find out here: http://ratfist.com/

Yes. I know it’s only a teaser for a book, but it’s on the web and it’s a comic, so fuck you. Read this for a taste of what’s to come and enjoy what Doug did after Earthworm Jim. 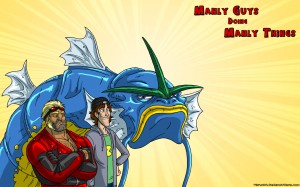 A weekly strip about an employment agency for out of work manly men. Headed up by a man named Commander Badass – a time travelling space marine, each strip looks at a cornucopia of characters from games and movies, such as Kratos, Dante, Marv,  Leonidas and a Garydos named Mr Fishy.

Check it out here: http://thepunchlineismachismo.com/archives/comic/02222010

Because it’s written by a girl. And apparently that’s shocking. It’s hilarious, and gives the reader a sense of pride when spotting a character they know.

And did I mention Mr Fishy?

I realise that the descriptions have been brief, but I’m a firm believer that these titles will speak for themselves. So get reading and let us know in the comments if you think I’ve left anything out.

Hailing from Kent, England, Mike is a writer, editor and podcaster who has just finished his degree at CCCU. He also is a drummer of 11+years, plays in several bands, and is available for session work. His other interests are Batman, music which doesn't suck and pizza. Follow Mike @The_Dark_Mike
You might also like
ben feebreakingEarthworm Jim