According to Nintendo, 2013 is the Year of Luigi. It has been 30 years since he emerged into the public eye and captured the imaginations of children (and adults) everywhere with his shorter, fatter brother. The Mario Brothers have stood the test of time, only very slightly changing in appearance over the years (unlike Stevey the meth-hog, Sonic’s weird dystopian future self). It would seem to be a time of great celebration for all nintendoheads everywhere, and finally! Luigi’s getting the recognition his smaller brother has been garnering for almost three decades!

Pissed off, if I’m being candid.

The thing is this;  it is my belief that this celebration is a shallow recompense, considering the buggerton of horrible things Nintendo have done to Luigi as a character over the past 30 years. It’s a cover up, a booby prize, a home edition board game instead of a brand new car.

Don’t believe me? Think this is the over-reaction of a mid twenties hairy manchild? Probably. Nonetheless, below is a timeline of Nintendo’s Luigi dickery, AKA The Five Stages Of Decline 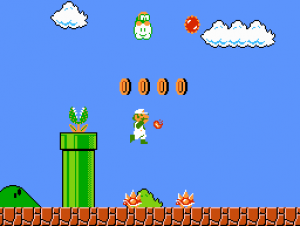 all together now : da da da do do da, do

After fighting off the advances of a giant gorilla for his girlfriend Pauline, Jumpman decided that the monotony was too much. So he fucked her off and took a life-affirming trip to the Mushroom Kingdom, where he changed his name to Mario and became acquanted with a lovely princess by the name of Peach.  She (inevitably) becomes captured and Mario sets about taking up the old hero schtick once again. But this time he brings his brother. This first appearance of Luigi was rather uninspiring- purely a pallette-swapped version of Mario. No extra powers, no real identity, No one cared. Bad start, Nintendo. Things improved a little in 1986, in the Japan-only sequel to SMB, entitled The Lost Levels. Luigi gained a few defining fetaures and could also jump higher than his brother. Getting there… 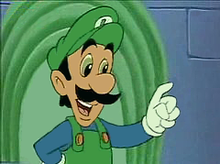 “And don’t do drugs kids, unless they are spotted mushrooms or flowers that make everything seem on fire”

The 90’s is where things began to pick up for Wigi. He gained a face and height – more better defined than in The Lost Levels. In Mario Bros 2 (fun fact- that was never supposed to be a Mario game, hence the trippin’ ballz aspects ) our intrepid brother could jump higher, longer and throw turnips a little bit further than his rotund sibling.  This stage also birthed the wildly successful cartoon series, in which Luigi really came into his own. He was charismatic, funny, and had a better relationship to Yoshi than Mario did. He called Mario his “little big brother” and would deride him on occasion. Luigi was slick amd charming, taking as much of the limelight as Mario. We also discovered that Luigi and Mario’s surname was Mario, meaning that they had cruel parents. The original trilogy of Mario games were also given the 90’s equivalent of a HD remake,in which Luigi’s characteristics became retroactively applied. 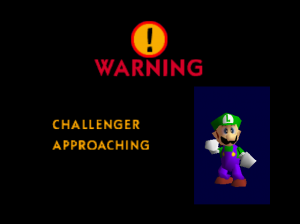 Prepare for armageddon. Wigi’s in town.

The end of the 90’s were a dark time for L.Mario esq.  His exclusion from games became more frequent, being sidelined into racing franchises and other sports. He was excluded in Super Mario RPG and Super Mario 64 (Notice that they removed the “bros”?) This was the begining of sidelining the poor plumber for the next decade. While Mario lapped it up, Luigi was left alone, bereft of all personality, with just a host of catchphrases replacing it.

Towards the end of the 90’s Luigi was done with this shit. As one of the secret characters of Super Smash Bros he unleashed a rage upon the unlucky opponents of the smash arenas, the likes of which other characters couldn’t compete with. He was, hands down, unstoppable in the right hands. His anti-gravity fireballs and punshing smash move were a terrible force to be reckoned with. This was Luigi’s final roar; a warcry that symbolised The last ounce of fire and passion left as Nintendo continued with project Dick On Wigi (giggidy). 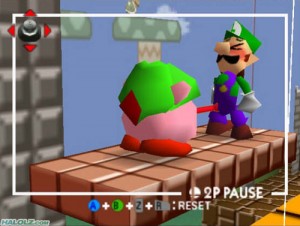 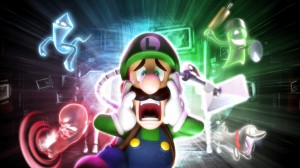 Pictured: Luigi running from the ghosts of the good games he was in.

Things went from bad to worse. A new console generation meant brand new shiny games. Nintendo promised a new take on Luigi; he was going to get his own game, and in it HE would be saving Mario. Anticipation was at fever pitch after fans saw what the GameCube could achive graphcally, with the Zelda/Ganon and Mario 128 tech demos.

Then they gave us Luigi’s Mansion.

Before I begin, a disclaimer: I think Luigi’s Mansion was a great game; the mechanics of the game were clever, the style was awesome, and it had a sinister edge (like the whole hanging man thing – look it up). The problem I have is the characters used. This could have been a lucrative opportunity to introduce an entirely new character to the franchise but instead Nintendo decided in their infinite wisdom to turn a much loved Mario brother into a simpering coward, terrified of creatures you can defeat with a vacuum cleaner. Yeah. This game completely ironcast the semiotics of Luigi being the tag along, even in his own game. Case in point: there is a button solely dedicated to making Luigi call out Mario’s name in a whimpery high voice. Add this to his complete lack of appearance in Super Mario Sunshine DESPITE everyone else holidaying to Delfino island (what is he, the maid?) and one can only deduce that Wigi must’ve done something terrible for Nintendo to treat him this way. Sunshine would have been the actual tits if Luigi had come bowling in at the last boss, completely ruining Bowser like the scaly bitch he is, a la’ Falco at the end of Starfox Adventures (it’s a good game, fight me). Even his second appearance in Smash bros melee was lackluster in comparison to his previous outing . But hey, it can’t get worse, right? 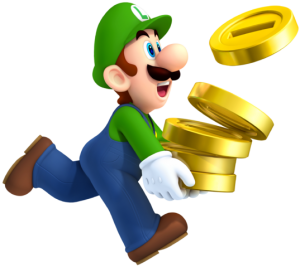 What have they done to you?!

Now we lovingly arrive at the stage in which Nintendo drop more balls over this character than quadraplegic juggler. This stage has seen the worst abuse of Luigi’s character. Gone is the slick taller brother, replaced with a damn fool. Mario Party portrays him as a stumbling idiot, dropping coins all over the wazoo, his SSBB iteration plays like utter clown shoes and then there’s Mario Galaxy.

Feminists, please stop burning your bras for one second and re-read the next statement before you throw pants at my house. The worst/weakest thing you can be in the Mario universe is a Princess. This is because you are constantly getting captured, and having to be rescued, causing problems for the strong characters that don’t need to be saved on the constant. In Mario Galaxy, You play as Mario searching for stars. Luigi offers him help, being the helpful sort of chap. But this new Luigi ends up GETTING. CAPTURED. EVERY. TIME. this means that in game you are actually hindered by your brother’s presence. It’s like they are saying “Jeez, wouldn’t it be better if HE wasn’t around, eh?”

He has been stripped of his prowess in The New Super Mario Brothers WII, only being able to jump as high or far as Mario. So at best, AT.BEST. Luigi has been reverted back to stage 1. Just a palette swapped Mario. We can take stock at least, in the fact that they won’t make another Luigi’s Mansion though…

I don’t know why Nintendo have done this , I don’t know if people like Luigi being more of a clumsy bafoon than Wario, and there are a million other factors I probably haven’t touched upon, but as someone who fell in love with the Brothers at a very young age (3) It is a travesty that affects me every time I see poor Wigi’s face.

Luigi year? Every year is Luigi year to me. 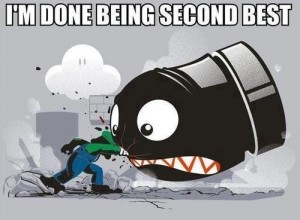 Do you feel this way about any of your favourite characters? drop a comment below and let’s get discussy!

Hailing from Kent, England, Mike is a writer, editor and podcaster who has just finished his degree at CCCU. He also is a drummer of 11+years, plays in several bands, and is available for session work. His other interests are Batman, music which doesn't suck and pizza. Follow Mike @The_Dark_Mike
You might also like
breakingLuigimario